Tony Abbott isn't a big social media user. He doesn't tweet much. But he was quick to tweet the Coalition's border protection billboard. Oh good, a return to grubby politicking over vulnerable people.

Tony Abbott isn’t a big social media user. He doesn’t tweet much. But he was eager to tweet yesterday: “I just unveiled the Coalition’s border protection billboard in Perth.”

In fact it’s a mobile billboard — the “debt truck” has been turned into a “boat people truck”.

“How many illegal boats have arrived since Kevin Rudd took over?” it demands.

But it gets better over in the west, where the Coalition clearly fancies it can tap into a deep vein of resentment toward the trickle of asylum seekers that manage to reach Australia.  A Crikey reader has provided some junk mail — in the most literal sense — sent by Liberal Senator Judith Adams. 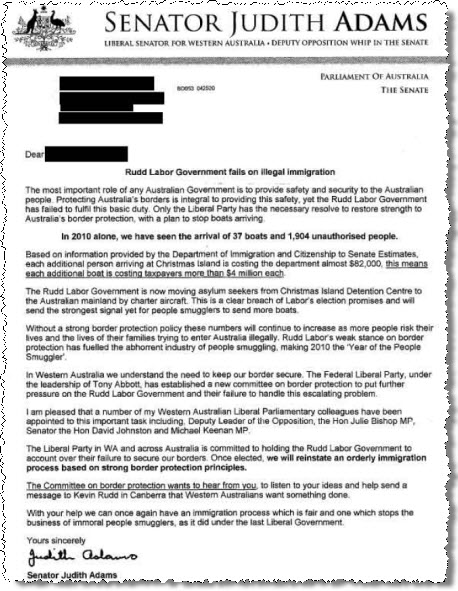 Adams also offers a pop quiz with questions like “Do you believe that the Rudd Labor Government’s soft stance on border protection is the reason for the increase in illegal boat arrivals?”

Looks like it’s back to the future with grubby politicking over some of the world’s most vulnerable people.

The fools don’t even know Australian law. God they are pathetic.

QUESTION TAKEN ON NOTICE
SUPPLEMENTARY BUDGET ESTIMATES HEARING: 20 OCTOBER 2009
IMMIGRATION AND CITIZENSHIP PORTFOLIO
(82) Program 2.1: Refugee and Humanitarian Assistance
Senator Fierravanti-Wells asked:
1. What is the definition of refugee according the UNHCR?
2. What is the definition of refugee according to immigration law currently in force in
Australia?
3. Is the definition of refugee according to immigration law currently in force in
Australia considered to be broader than the UNHCR definition?
4. Does the UNHCR define the term “economic refugee”?
Answer:
1. The definition of a refugee, according to the Refugees Convention is a person
who “owing to a well-founded fear of being persecuted for reasons of race, religion,
nationality, membership of a particular social group, or political opinion, is outside the
country of his nationality, and is unable to or, owing to such fear, is unwilling to avail
himself of the protection of that country” (Article 1A of the 1951 Convention Relating
to the Status of Refugees). The UNHCR has responsibility under Article 35 of the
Refugees Convention for supervising the application of the provisions of the
Refugees Convention.
2. Under Section 36 of the Migration Act 1958, a criterion for a Protection visa is
that the applicant for the visa is a non-citizen in Australia to whom the Minister is
satisfied Australia has protection obligations under the Refugees Convention as
amended by the Refugees Protocol.
3. Australia’s definition of a refugee is not broader than the UNHCR definition.
4. The UNHCR says that the term “economic refugee” is not correct, and that the
accurate description of people who leave their country or place of residence because
they want to seek a better life is ‘economic migrant’. The UNHCR defines economic
migrants as migrants who ‘make a conscious choice to leave their country of origin
and can return there without a problem. If things do not work out as they had hoped
or if they get homesick, it is safe for them to return home’. (source: UNHCR website)

Go Marilyn!
I have a number of elderly members in my family who are Menzies Liberals and they can’t understand what has happenend to the Liberal Party. Hard to explain to them that the party that they voted for in the 50s, 60s, 70s and 80s is no more and has degenerated into a populist rabble. Meanwhile thinkers in the Liberal Party like Malcolm Fraser who wrote so eloquently on refugees in The Age two days ago are ignored and rubbished. Neo-liberalism has killed liberalism.

This is the policy that Sheridan now wants us to revert to apparently. More suicidal kids, more kids in jails, more law breaking. Amazing how he understood in 2002 how the law worked and now refutes it.

Policy of insane cruelty
By Greg Sheridan, Foreign Editor The Australian
May 16, 2002
PETER Costello’s Budget, designed to secure him the prime ministership, was big on “border protection”. But what does border protection actually buy us?
I wish you could meet Humam Al Abbady. All of 16 years old, a talented artist, he is a slightly built boy and darkly handsome. To look at him you’d say he’s in the prime of life. Nature intended him to be worrying about the performance of his football team, his marks in school, a future career.
Instead, the systematic and deliberate cruelty of the Howard Government’s asylum-seeker policies have driven Humam to the brink of suicide and despair.
I met Humam on Tuesday at Cumberland Psychiatric Hospital at Westmead in Sydney’s west. He was there because of his third suicide attempt.
Humam has been dealt a pretty rough hand by life, though nothing as rough as since he came to Australia as a 13-year-old. Humam was born a Shia Muslim in Iraq, where the Shias are a despised minority. His uncle was murdered by the Iraqi security forces, two of his first cousins disappeared. His aunt was arrested, stripped and beaten. Humam’s father was twice taken into custody and assaulted and Iraqi security personnel routinely looted his shop.
All this is accepted as fact by the refugee tribunal. However, according to the tribunal Humam’s father did not have a well-grounded fear of persecution. Here the reasoning is exquisite. According to the judgment, the Iraqis are very expert at persecution so if they had been planning to persecute Humam’s father they would have done so, rather than leaving him at large. On the basis of this logic presumably you have to be actually dead before you qualify as a refugee.
However, the tribunal decided that the act of applying to become refugees meant the family could not be sent back to Iraq because they would certainly be persecuted now.
But, because in their flight they had spent time in Syria they could go back there. Therefore they are not refugees. Syria, with its own appalling human rights record and growing restrictions on Iraqis, will not accept them back so now they are in a wretched no-man’s land, in which they must dwell for as long as it suits the pleasure of the Howard Government.
Humam, his brothers and sisters and parents have been in detention almost three years, in Western Australia and now at Villawood. During their time in detention they have been involved in numerous incidents of which, of course, there are various versions. But I would ask anyone with teenage sons to imagine how they might react to year after relentless year of cruel and degrading confinement.
Their treatment has certainly been cruel and degrading. At one point Humam’s mother was put in solitary confinement with his young brother and sister. Humam has endured spells of solitary confinement, trapped in a freezing, lightless room, without even a toilet, only a plastic bag to receive his waste.
Humam’s family has been several times split up in detention, at one point all the older members of the family being sent away for punitive purposes and no one left to look after the little boy and little girl, then aged six.
At another stage last year Humam was sentenced to a couple of weeks in jail because of his involvement in a riot. The magistrate, Stephen Vose, said he couldn’t understand why the children were in detention anyway and commented: “If you have young teenage males locked up in jail, because rest assured that’s what this is, for an indefinite and substantial period of time it is inevitable that you are going to have serious outbursts of bad behaviour. These boys will spend a substantial period of their youth in jail for nothing . . . The whole process is flawed from the start.”
Humam agrees with the magistrate: “Jail was much better than detention. There was much more respect from the guards, better food, better activities.”
IN the little hospital room where I talked to Humam was an obviously accomplished portrait he had painted of a friend. Why would this innocent boy try to kill himself?
“I just tried to finish my life. I got bored of my life in the detention centre. They steal something which is mine, which is my freedom.
“People who have killed themselves is because their patience and their strength is all gone. Even myself starts to hate me. I say to myself I don’t want to live with you.
“I talk to some Australian friends, people my own age. I say the chance in this life is all for you. I just don’t have chance in this life.”
In the psychiatric hospital Humam was under the eye of two security guards. The other patients there said to him he must have done something incredibly bad to warrant that.
“No,” he said, “I’m just a refugee.”
A couple of hours after we finished speaking Humam was taken back to the Villawood Detention Centre, although a doctor had told him and his friends that this would certainly not happen because the danger to his life was so great.
Within the Government, if small-l Liberals are inclined to speak out about the gross inhumanity of Australia’s treatment of children in detention they are quickly rounded up by the Prime Minister or his minders and told to keep quiet.
The ABC, which revealed some of the shocking truth about conditions in the detention centres, was subject to a sustained campaign of intimidation by the Government to try to keep it quiet.
If Humam dies while under Australian care it will be the fault of the determined, vicious cruelty of the border protection policy.
This quiet, gentle lad could make a real contribution to Australia. It is insane that he is treated as he is.

Greg Sheridan, writing in the November 8 Australian, summed up the mood among many conservatives: “You have a right to determine who comes into your home. But if there’s a car accident in your street in which the husband is killed and the wife, bleeding and injured, brings her three small daughters to your front door, in need of rudimentary but urgent medical attention and the use of a phone, what is your response? Legally you’re entitled to refuse her entry, no doubt. Morally, to do so would be evil, even grotesque.”

The Liberals under Tony Abbott are looking more like the Nazis under Hitler.

Yeah its pretty mean, nasty and ignorant of the facts. What I find the worst is that there is such public support for australia ignoring its international responsibilities.