UPDATED: Nick Sowden -- the Young Liberal who embarrassed his party with a stream of racist slurs on Twitter -- has been expelled from the party, Crikey has learned.

Nick Sowden — the Young Liberal who embarrassed his party with a stream of racist slurs on Twitter — has been expelled from the party, Crikey has learned.

Sowden received an email from Joel Harrop, Liberal National Party president, this afternoon. It said a meeting had been convened and a unanimous decision taken to withdraw his membership after he branded US president Barack Obama a “monkey” last night.

Harrop said Sowden had been found to have brought the LNP into disrepute and engaged in “conduct severely harmful to the best interests of the party”. He has been sacked from the LNP and the Young LNP organisation. 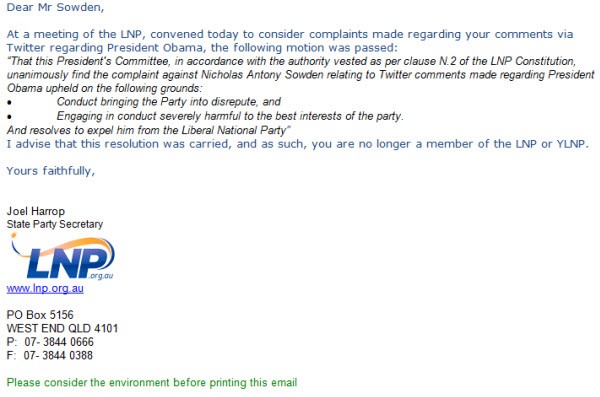 Sowden believes he’s been treated harshly. His expulsion was decided without a chance for him to respond to the allegations.

“There should be an element of natural justice,” he told Crikey after receiving the email. “People shouldn’t just be judged on hear-say and judged in the media.”

The 22-year-old medical student said the party was engaged in a “political game” to dump moderates from the party ahead of the Young LNP convention in a fortnight. In response, Young Liberals president Roderick Schneider told Crikey earlier today: “If he, after his actions and what he’s said today, wants to face the convention I’d be very surprised.”

Watching Obama’s interview with Kerry O’Brien on the ABC last night, Sowden fired off his racist barbs to his 200-odd followers – quickly relayed by hundreds more users. Sowden deleted his account later in the evening, but several Twitter users captured the stream for posterity.

@nicksowden Im not sure why they paid kerry to fly to America, if they wanted an interview with a monkey surely a Ferry to Taronga would have sufficed.

@nicksowden If i wanted to see a monkey on TV id watch Wildlife Rescue. #justsaying #obama730

@nicksowden Also, why did we pay Kerry to go to US when Obama is coming to Aus in June? #flail

Demonstrating his Stephen Colbert-style satirical wit, Sowden offered this on health reform earlier in the evening:

@nicksowden If Keneally wants reform, why doesnt she just do it, she has the power to reform NSW health, stupid bitch, youre not in the kitchen anymore!

Discussion continued on a number of blogs, and ongoing reaction on Twitter was fierce: Sowden is a “racist” whose “vitriol knows no bounds”; his political career faces a “meteoric rise to the gutter”. One Twitic may have summed up his unfortunate position:

@dctool It’s amazing that in the space of 1 hour and 4 tweets @NickSowden Political career has probably ended before it even began.

But Sowden insists his followers do understand his particular brand of comedy. The Griffith University student and politician, gay group leader and vocal Liberal lobbyist was unaware of the media storm when Crikey spoke to him this morning, which he described as “bizarre”.

“My tweets are written to pay out the crazy Right,” he said, insisting he’s from the Left of the Liberal cause. He points to his work as secretary of Hope for Health – a student organisation that works with indigenous communities – as an example of his racial tolerance.

“The work that I actually do is of far more value than the things I say. The people who sit behind their screens and blog aren’t going to make a difference,” the 22-year-old said.

“I have much more of a liberal approach to immigration than Kevin Rudd.”

Friends, he said, know he is not a racist: “I think it’s bullshit. I’m a pretty irreverent person. I don’t care much about words, I care more about actions. There’s no point sitting behind the veil of political correctness.

“I’d prefer this not to happen. I’m not a big shot in anything. I don’t have any major positions. I’m just involved in a branch. I’m not a public official.”

Sowden said he cancelled his account because: “I just figured if people couldn’t understand what was going on then there was no point having it. I couldn’t reply to everyone so I [shut it down].

“If that’s what Twitter has become, this sterile thing, I think that’s a bit sad.”

Sowden was a member of the Democrats at the University of Queensland before joining the LNP. He’s expressed his distaste for the American president before, posting a photo of Obama as Adolf Hitler on his Facebook page and joining the group “Obama Screwed More People Than Tiger Woods”. And he has form on Twitter, previously referring to an Indian as a”curry muncher”.

As even the most casual pollyphile twitterer knows there are at least as many ‘fake’ politician twitter accounts out there are real ones. In these cases it is clear that the intention is satire, and comments like these would be taken as such from say a fake Wilson Tuckey account.

But using your own name for this without qualification is just stupid. It’s not about the nature of twitter and whether it is ‘sterile’ or ‘politically correct’. If you stood up in the middle of a Pub and shouted this stuff everyone would think you’re a racist, sexist dickhead, even if your friends at the table ‘understand your humour’. If you instead stuck on bushy fake eyebrows before standing up and yelling this then people would understand that your saying John Howard is a racist, sexist dickhead.

It’s just common sense. Twitter, or indeed the internet more generally, is a public place and you need to use the same common sense approach that you would in any other public place.

Hmmm. Sowden’s mistake seems to be regarding Twitter as ‘talking’ rather than ‘action’. He doesn’t seem to get that posting on Twitter is an action for which it’s perfectly valid to judge him.

Also, I’m sick of people pretending they’re under siege from the PC police when they’re saying blatantly hateful stuff and richly deserve to be called out on it.

I use the insult “Ya Monkey” quite regularly, but for me it’s a universal mild insult directed at anyone being stupid (black, white, yellow, red or whatever). Its based more around atheistic/Darwinist beliefs rather than umm, you know… I don’t even know what the real origins or the “Monkey” racial insult is!
Ok.. So a quick search on the net says:
http://www.rsdb.org/
Monkey Blacks Similar appearance/genetics.
Monkeyboy Blacks People once believed, because of their high cranium, blacks were close cousins to primates.

So essentially its basically saying that Blacks people are genetically inferior.. what a load of crap. (whoops, is that fecalist? )
I’m amazed there is such a thing as a Racial Slur Database 😛

Though I have to say because of reactions like this I try to use it less around anyone with a Darker heritage. (tell me, is _that_ racist??)

The way he used the term I think is a very fine line.
At the very least the guy intended it to be quite insulting.

Hmmm now I know the origins of the insult I’m less likely to use it. It’s quite insidious.

Trouble is, if they are written to pay out the crazy right, it does not carry as much intent on Twitter as say it would on the Colbert Report, no-one knows how it is intended and outrage ensues because it is open to interpretation (and open for all too read).

Especially in light of the Harbhajan/Symonds incident in Cricket recently, one would think the naming of someone a Monkey would be a well known no-no, especially for and by a Sports Fan like Sowden (by the photo shown in this article he appears to be).

A Liberal Party leader of the future no doubt.