Fairfax Media, under siege over the defection of its largest real estate advertisers from its glossy Melbourne Weekly Magazine, has written to the defecting agents demanding they reveal intimate details of their commercial relationship with a rival publication.

In an extraordinary letter sent late on Tuesday to around 20 Melbourne real estate agents who have signed with former Age property editor Antony Catalano’s Weekly Review, Age chief Don Churchill reveals the media giant is gravely concerned about the “maintenance of our business” and flags a looming fallout for the company’s revenue from the new publication.

“Reports have been published in the media [Crikey] that your business has made certain advertising commitments to a new real estate publication which will circulate in the same distribution area as Fairfax Media’s Melbourne Weekly Magazine,” Churchill writes.

“Can you confirm … that you have entered into some arrangement — whether through a shareholding or another financial interest or as an advertiser — with the new publication?”

And even more desperately: “Can you tell us when the new publication will first be published?” 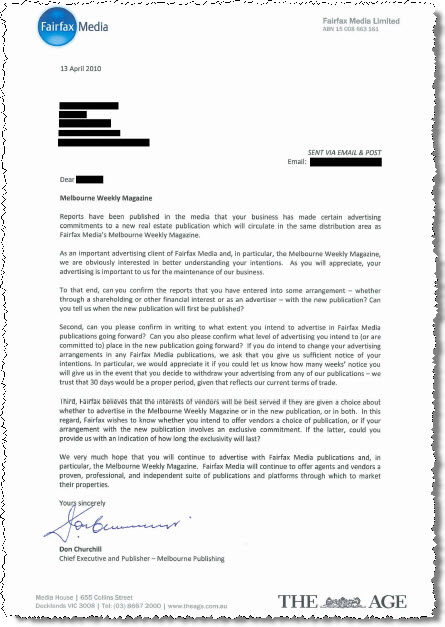 Churchill, a New Zealander who made his mark merging two North Island mastheads, also appears to be in the dark over the commercial ramifications of the venture for Fairfax’s business model. He demands agents write to him to convey their future intentions, suggesting any defection could snowball across the company as a whole:

“Can you please confirm in writing to what extent you intend to advertise in Fairfax Media publications going forward?”

Churchill imposes a strict 30-day deadline for agents to announce their decision to withdraw existing advertising.

Fairfax stands to lose between $10 and $15 million in profits as the bulk of its Melbourne Weekly property advertising shifts to The Weekly Review when its first edition hits the streets on 28 April. Many of the same real estate agents involved in the new publication also bankroll the Saturday Age to the tune of an estimated $40 million.

Churchill hints at legal implications over the impact on vendors of any exclusivity arrangements signed with Catalano: “Fairfax wishes to know whether you intend to offer vendors a choice of publication, or if your arrangement with the new publication involves an exclusive commitment.”

Melbourne Talk Radio scion Steve Price will write a regular column, with Catalano regularly appearing on the station to give updates on the city’s red hot property market.

Meanwhile, Crikey understands that some agents may be mulling legal action over the publication of incorrect open for inspection and auction times in Saturday’s edition of The Age. Last weekend, miffed buyers were reportedly knocking on the doors of houses that had been sold weeks previously with irate vendors said to be raking over their options for restitution.

Fairfax shares, which have fallen by 60% in the wake of the global financial crisis, remained steady this morning at $1.80 as Crikey‘s deadline approached.

If they are former how can it be poaching and how can former staff have jumped ship if they haven’t been working at Fairfax for more than two years?

ROTFLMAO
For a second there, I thought I read that Mick Gatto had been hired by the new kid in town, Weekly Review.
Now if Fairfax thought they had problems before…….. 🙂

If The Age no longer has to rely on on the spivs in silver cars for its finances, maybe it can start telling the truth about the state of housing in this country. Of course back at the SMH the same old lies and bullshit will continue, along with the winsome “ooh, look where such and such overpaid celeb is moving to!” columns.

Crikey should check their facts. To say that Eileen Berry and Sue Richardson jumped ship is untrue. Berry has not worked at The Age since 2007 and Richardson has not been at Fairfax since 1994! The list of ex Fairfax is not due to poaching but merely hiring those talented staff who have left at times when The Age wanted to reduce the head count. Cant wait to read the work of Wilmoth, Perkin, Ormond, Hill and others !