This week's Wankley goes to the all-male all-white launch of Melbourne Talk Radio at Gordon Ramsay's Crown Casino noshery. All male, that is, save for the Women's Weekly Deborah Thomas.

This week’s Wankley goes to the all-male all-white launch of John Singleton’s Melbourne Talk Radio at Gordon Ramsay’s Crown Casino noshery. All male, that is, save for executive editor of The Women’s Weekly Deborah Thomas, who managed to land the coveted Sunday morning health and well-being slot with co-host Andrew Rochford: 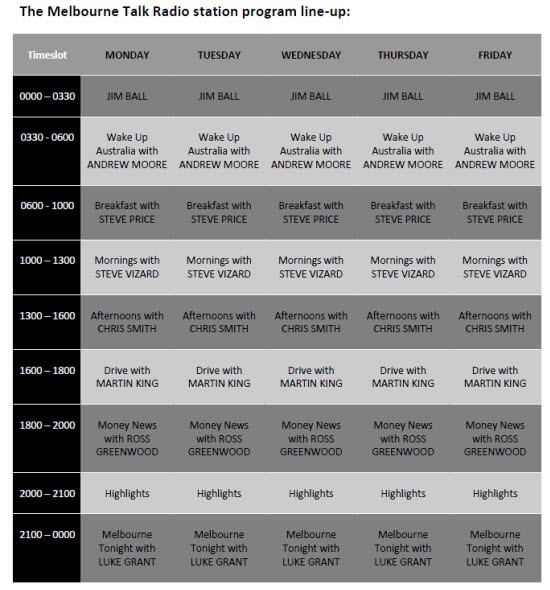 In a gift to media studies students across Australia, Steve Price’s selection of oracles like Jason Akermanis, Sam Newman, Martin King and Glenn Ridge perfectly illustrated the last relics of a Channel Nine-News Limited talent rump thrashing around for relevance.

In one sense, it doesn’t matter, with the whole venture perhaps the most obvious commercial decision Singleton and joint-owner Pacific Star has ever made — the Melbourne AM talk radio advertising market is dominated by 3AW, who manages to cleave $16 million out of advertisers’ pockets each year, the vast majority of Fairfax’s radio division’s profits of around $25.9 million. If Singleton can grab even 30% of that, the venture would have been well worthwhile.

But it was Wednesday afternoon’s icky schlong-laden launch that really drew our ire. In the radio game, male presenters are favoured because they apparently instill some kind of Law of the Father edict over the airwaves: 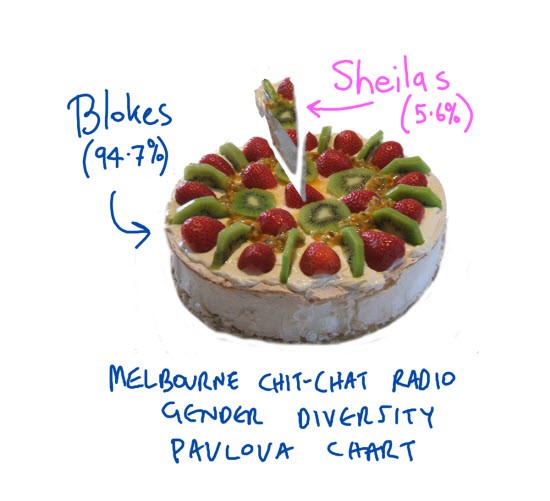 The debate is hardly unique to Melbourne — only last week The Guardian was working itself into a lather over a lack of female presenters on the flagship Radio 4 current affairs Today.

According to Price’s knob jockey sidekick Andrew Bolt, the station is not right-wing, but is in fact “conservative” — although presumably not of the type favoured by Waleed Aly in his recent Quarterly Essay.

Bolt and Price should secure satisfactory ratings. But MTR will surely be towelled up during the afternoons, when in the radio equivalent of an SBS test pattern — Chris Smith’s 2GB show — will be streamed live from Sydney. Smith has undergone a miraculous resurrection following his 2GB Christmas Party antics last year in which he touched up several staff members after downing several champagnes.

Smith, a former chief of staff at A Current Affair, later claimed he was a “bipolar alcoholic”. Barely six weeks later, he was back on the air, with Macquarie chairman Russell Tate relaying that Smith had demonstrated “unqualified remorse”.

It is uncertain how the good denizens south of the Murray will deal with Smith’s references to the cross-city tunnel, his obsession with the Skaf brothers, Bill Henson or whatever other story The Daily Telegraph is running big on that day.

A number of other presenters will also be lifted direct from 2GB — Jim Ball between midnight and 3:30am, Andrew Moore on the graveyard shift, Ross Greenwood between 6 and 8pm — and of course the Alan Jones and Ray Hadley “highlights” reel each night after Greenwood.

Steve Vizard’s appointment to the morning shift has also raised eyebrows. Vizard, who has been itching for journalists to finally excise the adjective “disgraced funnyman” from his in-print references, will take on his close mate Neil Mitchell for two hours between 10am and midday.

Crikey’s own Guy Rundle will feature as a regular guest on Vizard’s program, phoning in highlights from the UK “as interesting events occur”. The duo were seen in close conversation at the launch of Rundle’s play Godzone in December, as Vizard glad-handled the assembled A-listers with aplomb in a striking white suit. When Vizard announced Rundle’s involvement at the launch to fend off accusations of right-wing bias, Bolt ventured the decision was “a mistake”.

Vizard is said to be completing numerous media interviews in the lead-up to the launch, in a bid to bed down his resurrection in the popular consciousness.

Rundle as a regular guest on Vizard sounds………Disappointing. 🙁

What a boring radio station all of Australia’s idiots in 1 station,does Singleton have a fascination for right wing fascists,seems to employ a few of them

Nice work, crikey, but a little too reasonable….. I can’t help adding some of the more biting remarks Catherine Deveney has made on her Twitter feed….

“I’m relieved the shortage of middle aged, middle class men with Narcissistic Personality Disorder in the media is being addressed”

It’s April, we should be wearing capes and listening to Get This! Why doesn’t some bloody station go to Tony’s door, give him some cash and say “Come and be a funny bastard on my radio station! Get Ed Kavalee (use food to lure him), we have the billboards already done with fake bodies already C&B’d. See you Monday!”

Good story.
Except for minor stuff…like accuracy. Unless my ears deceive me 774, the tax payer funded bastion of equality, has a testosterone laden line up that goes Symons, Faine, Eastley, Stubbs, Guille, Deltoy and Chappell. One woman doing Drive. A former stand up comedian, a red faces judge and a band full of hacks. And the other mob goes Stevenson, Burns, Mitchell, Walters, Hinch, Mansfield Brady! Not a woman in sight. Plus all male footy. A former young talent timer, two 1960s voice over guys , a man in need of a liver transplant and a couple in need of hair transplants. Ditto TripleM. Ditto Fox.
Ill test the new mob for a laugh and on the basis Im not paying for them ( unlike the bland subsidised mob on our Aunty)