Crikey wrap: It’s who you know, not Hu, you know?

Following on from the Stern Hu case, Crikey intern Tom Cowie wraps what the media is saying about verdict implications, including Chinese-Australian relations and foreign investors in China.

When a Shanghai court found four Rio Tinto executives guilty of taking bribes and stealing commercial secrets on Monday, many saw it as a warning signal to foreign companies dealing in China: make sure you play by our rules. The trial, which was held partly in secret, saw the four men receive prison sentences of 7-14 years and has been seen as a possible rebuke from China against the failed Rio Tinto-Chinalco deal of last year.

In particular, it is the sentencing of Australian citizen Stern Hu to 10 years jail that has brought to a head Sino-Australian diplomatic tensions that have been simmering since Hu was detained in July last year. Earlier in the week, Prime Minister Kevin Rudd commented that the trial left “serious unanswered questions”, while foreign minister Stephen Smith said China had “missed an opportunity to bring some clarity to the notion or the question of commercial secrets”.

Chinese foreign ministry spokesman Qin Gan hit back last night, saying that Beijing wanted to “express serious concern” over the remarks and that the Australian government “respect (the) result and stop making such irresponsible remarks”.

Rio Tinto has informed its employees of their involvement in the trial in an email sent on Monday. It wrote that the evidence presented during the trial leave “no doubt as to their guilt”: 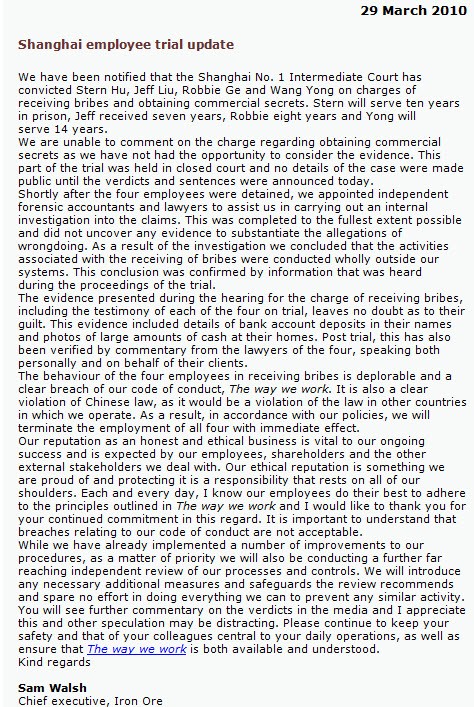 They also state that the trial has led them to complete an internal investigation in to the matter, which they say led them to the conclusion that “the receiving of bribes were conducted wholly outside our systems”.

To allegations that bribery is widespread in their dealings with China, they write that “the behavior of the four employees in receiving bribes is deplorable and a clear breach of our code of conduct; ‘the way we work’.

“Our reputation as an honest and ethical business is vital to our ongoing success and is expected by our employees, shareholders and the other external stakeholders we deal with.”

The world’s media have also weighed into the debate, arguing that the verdict may have implications on wide range of stakeholders, including Rio Tinto, Chinese-Australian relations and foreign investors in China.

State-owned newspaper the China Daily has expressed its support for the verdict, saying that the verdict “has defused tension between China and Australia”. They go even further, saying that the guilty charge will “guarantee a healthy environment for businesses” and that “only by bringing justice to the guilty can the dignity of the law be upheld”.

In the Australian media, Fairfax’s Ann Kent says that the sentence handed out against the “Rio four” were “by any criterion, extremely harsh”. Kent also writes that the “verdict, announced to a waiting world, is based on extremely shaky legal foundations”. Kent’s Fairfax stablemate Malcolm Maiden aims his condemnation at Rio Tinto, arguing that, considering the case could go to appeal, the company is “open to attack” and “has walked away from its employees too quickly”.

In The Australian, China correspondent Michael Sainsbury argues that the trial is designed to “send a message to foreign companies that China was powerful enough to do what it wanted and they should obey its laws”. He also writes that by delivering this verdict, the party has communicated to the Chinese people “that the government (is) protecting the interests of the country”.

In the Wall Street Journal Hugo Restall writes that the timing of the case makes “suspicions inevitable”, however, the reality “is probably more complicated”. He says that even though the Chinese justice system may be “manifestly unfair”, Rio Tinto was also responsible for putting “forces in motion that led to four men losing their freedom”.

In the Asia Times, Peter Lee questions Chinese billionaire Du Shuanghua’s involvement in the case after he testified to giving the $US9 million in bribes to the Rio executives, “Du’s involvement threatened to take the case beyond the sordid commercial shenanigans involved in feeding China’s need for iron ore, and mingle it with the business dealings that allegedly occupy and advantage some of China’s supreme leaders and their families.”

The Sydney Morning Herald is reporting that the well-connected Chinese billionaire is “unlikely to be prosecuted”.

In the UK, the Telegraph’s Damian Reece agrees with the actions of China and Rio Tinto, writing that “China can show it’s getting tough on corruption” and the mining giant “can show it’s co-operating with the Chinese”. On the Times Online opinion pages, Jane Macartney writes that the bribery charges are “surprising” in that the Rio men were convicted of taking bribes instead of offering them. She also writes that the story is not likely to cause more than a ripple in business dealings in China, “corruption is so widespread in China that small-scale cases can cause little more than raised eyebrows”.

Also at The Times, David Wighton weighs in, writing that foreign companies should be concerned about the verdict because in “suspicious” countries such as China “everything becomes a secret”. Wighton shares the concerns of the Australian government, writing that it has become “hard to discern the line dividing what is acceptable and unacceptable practice” in China and that the “line can move depending on prevailing commercial and political interests”.

In the Guardian, Nils Pratley also takes a shot at Rio, arguing that it should have “summoned the courage” to echo the point made by Stephen Smith that the case left “serious unanswered questions” and that “the failure of Rio, in its rush to rebuild bridges, to make that additional point is regrettable”.

The Independent’s David Prosser shares his view, writing that by washing their hands of the executives, Rio has left them out to dry. “It’s not just that Rio staff have been found guilty of paying bribes and stealing commercial secrets, but also that the miner allowed the rest of the world to reach its own conclusions on the basis of popular prejudice.”

Meanwhile, at Business Spectator, Alan Kohler joins in, writing that “Australian business people should not think for a moment that the conviction of Stern Hu on charges of bribery means that bribery is now out of bounds in China.”

Kohler agrees with two lessons that John Lee sets out in Forbes. Lee writes that foreign businesses should be “very worried if any civil or legal disputes arise” and that they should realise that “whenever negotiations involve state-controlled entities, assume that one is ultimately dealing with the state.”

In summing up, the real lesson from the Rio case, Kohler adds the defining point: “It’s who you know, not Hu, you know? That is, it’s all about influence and trust.”