Population growth — it’s time we talked about it

Australia's population is growing at twice the rate of the rest of the world. Is growth a dirty word?

Australia’s population is currently growing at twice the rate of the rest of the world.

On Friday, the Australian Bureau of Statistics (ABS) released an update on the nation’s population, which reached 22,066,000 on September 30, 2009.  66 per cent of population growth was due to overseas migration. 34 per cent was due to there being more births than deaths.

Like Prime Minister Rudd’s speech yesterday, political discussions about population growth are usually couched in terms such as liveability, innovation, sustainability and planning. Others are more blunt –“Growth doesn’t have to be a dirty word,” Queensland Premier Anna Bligh said yesterday ahead of the Growth Management Summit she’s hosting this week.

But the fact is, population growth isn’t a very popular notion.

Take this polling from Essential Research from just over a fortnight ago. When asked the question: “It has been estimated that Australia will have a population of 36 million by 2050. Do you think this will be good or bad for Australia?” — this is how people responded: 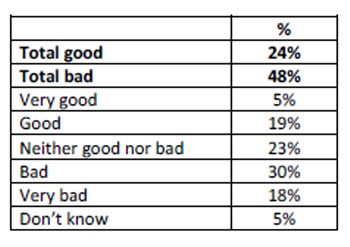 Drill down deeper and it gets more complicated. Take this set of questions from Essential Research posed in late February:

And Greens voters were more likely to agree that Australia has a fragile environment that cannot cope with a much larger population (66%).

This week we’ll be exploring the subject as it relates to areas such as housing, infrastructure, climate change and immigration. Today Bernard Keane weighs in on housing supply, Chinese investors and xenophobia, and Charles Berger expands on the Australian Conservation Foundation’s campaign around population growth and the threat to biodiversity.

We also want to know what you think — populate our inbox with your thoughts by emailing [email protected] with ‘Population Growth’ in the subject line.

It’s all a selfish whine because the world’s population will continue to expand and we cannot cull humans or put a little wall around Australia with “do not enter, we are full” on it.

2 billion human beings don’t have enough food, we grow enough for tens of millions and waste billions worth of it every year and then whine that we can’t accept more people.

8 million people come here each year, the country neither sinks nor do we have people bringing their own water or dying of thirst in the streets.

While I respect the environment and have always done my bit to preserve it I find this whinge about population control to be Orwellian and rather selfish and sick.

This is not our island, it is part of the world and we have no right to pretend otherwise.

What are we proposing to do? Penalise couples for having too many children? Implement Hansonesque immigration policies? I just don’t see how people plan to “limit” population in any reasonable, liberalistic and democratic way.

In any case the fact is that some nations are facing a rapidly declining population that threatens the viability of these states themselves. Russia may not be a viable nation in 50 years if population trends continue along their current trajectory; comparatively we are in an envious position. Australia’s geopolitical weight, its long term security, its economic prosperity and the continued vibrancy of Australian society are all improved by an increasing population. It seems like a no brainer to me, the real question is how do we manage it in an environmentally, socially and economically responsible way?

Well, I am probably one of the aforementioned Green voters. And while I strongly believe in aiding the Third World and give to Oxfam and Fred Hollows every month, no, I don’t think we should be increasing Australia’s population beyond current levels (and indeed should be trying to reduce the population in a gradual and sustained fashion).

For one thing, there isn’t much evidence to suggest that emigration from third-world countries will reduce their populations over time. Uganda has the almost the highest emigration rate in the world at 8% per year – yet despite this, its population manages to grow at 3% per year, thanks to high-fertility rates. Without addressing the underlying causes of high fertility absorbing more migrants will at best only buy time for overpopulated countries.

Why is any mention of population limitation immediately met with Tea Party-ish screams of “They’re going to cull humans!” or ” Environmentalists want a one child policy!”? It’s lunatic and doesn’t help the discussion.

What we should be talking about is balancing baby bonuses with baby taxes. Encourage couples to replace themselves, but put a substantial tax levy on further offspring.

It would also tilt the playing field toward satisfying those who fear being outbred by immigrants by making the white middle class the most likely to be able to afford to breed.

As the mother of 3 children, I can’t be bombastic about limiting the number of kids people have. I agree a lot with SHEPHERD MARILYN and insist on what I’ve said before – education, education education. If a responsible govt took the initiative and spent our dollars on educating people, then it may raise peoples’ consciousness. However, the number of kids women are having in this country still isn’t 2 per woman. There are other avenues to explore re conservation of food, water and other resources. Let’s educate people. I also agree, that we need to get rid of just thinking of us on this continent. The world belongs to the world’s people! We should start by acting accordingly!

(It certainly makes using high quality land suitable for growing our food, handed over to wealthy mining companies to mine even more coal – in the NSW Hunter region???) How dumb is that?

SANCHO – I agree. Perhaps we shouldn’t hand out a baby bonus after 2 kids? Or support paid maternity leave for a 3rd child?
There’s only been 22,000 asylum seekers accepted here over 35 yrs? Last year, the immigration figure was over 140,000 people. The present hysteria over asylum seekers arriving by boat is ludicrous – apart from the horrific human misery involved!
We need facts and common sense, not taking advantage of global problems to make stupid and unjust rules etc!