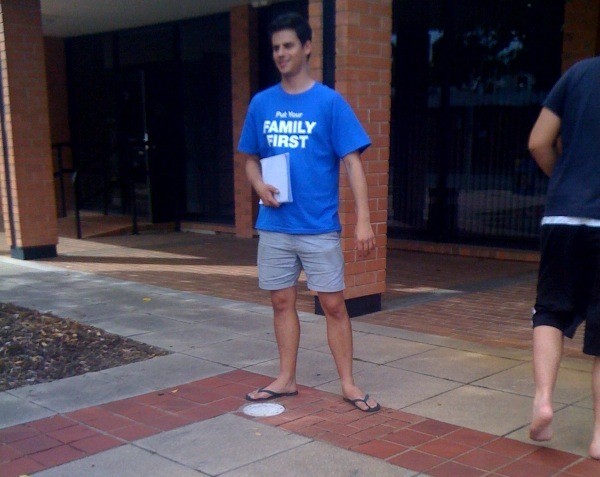 Labor’s Family First fraud in South Australia last Saturday has broken state borders. An ALP apparatchik from Queensland is now proven to have had a hand in the scandal and there may have been other fly-ins from other states.

No longer confined to one renegade state branch of the Labor Party, it involved sanction by high authority and with a federal election this year, the scandal could taint Kevin Rudd as happened to John Howard for Liberal’s use of fake election material at the last federal election in the NSW seat of Lindsay.

One volunteer in the SA scandal has been exposed as Nino Lalic, a Queensland delegate to Young Labor’s national conference connected with the Queensland Public Sector Union. When he’s not volunteering to get involved in an electoral scam in Adelaide, he works in the office of the Queensland Minister for Disability Services, Annastacia Palaszczuk.

The gist of the story is this: Labor, down in the polls, staring at possible defeat. Every consecutive poll shows growing support for Liberal leader Isobel Redmond. The ALP hatches a plan to use ALP members and volunteers covertly. They’re sent out in the disguise of volunteers of the Family First Party. Same colour clothes, same use of capital letters on the T-shirts … Put your Family First.

Then, on election day, these two-visaged volunteers distributed how-to-vote cards, which looked like Family First’s and that said that to follow Family First, voters should put Labor above Liberal.

That’s completely the opposite of how Family First wanted its preferences to go.

“It’s a corruption of process,” said defeated Liberal candidate Joe Scalzi. Had Liberals won in marginal seats where such chicanery went on, there could now be a Liberal Premier. That likelihood — that Liberal would win in a fair and just election — is why Labor did what it did.

When asked about the fake card during ABC-TV’s televised election coverage, Deputy Premier Kevin Foley responded, “…clearly anything from the Labor Party would have been done within the Electoral Act” and that the tactic was “what you do in politics.”

Family First is outraged but Labor doesn’t give a fig leaf. The votes are in and Labor won government.

Stricter legislation, much greater polling booth scrutiny and harsher penalties need to be applied here. There’s far too much of these types of shennanigans clouding the integrity of our democratic process. Most worringly is that much of the foul play is being perpetrated by the two major parties and it’s obvious the decision makers in these parties are not deterred by the risks of making fools of themselves.

(1) A corporation shall not, in politics, trade or commerce, engage in conduct that is misleading or deceptive or is likely to mislead or deceive.

Rann and his party show themselves to be the scum they are. I don’t hold any liking for Family First, but I do hope they find some way to sue the b*stards.

@GAT (Melb.): Does politics need to be included? It is business, these days, so could be included under trade or commerce.

Thanx Meski. The High Court has interpreted ‘trade or commerce’ reasonably broadly to include all buying and selling of goods or services but not so broadly as to include what we broadly understand to be ‘business’. So the core activities of churches, trade unions and political parties would not be included unless a church returned to selling indulgences, trade unions became trading cooperatives as Hawke tried when he was president of the ACTU, and political parties returned to buying votes.