It seems that the traditional mainstay of the public relations industry, the humble media release, is increasingly being usurped in newsrooms by its more comprehensive successor: the audio and visual news release.

These products deliver edited sound bites, interviews and footage straight to the journalist’s desk, in a conceptually complete pre-package. Suddenly, the day’s bulletin draws from public relations material that has been downloaded rather than faxed or emailed.

The companies that produce these audiovisual releases, like VnR and Media Game, then distribute them to the media on behalf of clients as diverse as public relations giants like Hill & Knowlton to retailers like Coles, focusing on specific people, events, products and locations. It is then formatted as a completed, and unfiltered, news bulletin ready for broadcast.

On 19 November 2009, Media Game sent out an audio news release about their client the Commonwealth Bank of Australia’s $40 million financial literacy program for school children. The release included grabs of CBA spokesperson Lisa Cartwright and generated media coverage on regional and metropolitan radio stations that day, including 2GB’s Money News segment and Vega’s 7.30am news bulletin.

In the following days, articles carrying the core message of the original media release would be published in the Herald-Sun and syndicated to The Advertiser and The Daily Telegraph, while The Australian carried a brief mention.

Stephanie Barry, CBA general manager of public relations, said the day after the media launch, “Not only did we receive feedback from various media, various stakeholders have also had access to that material and it has actually driven a lot of positive stakeholder feedback and engagement from business organisations that would not have otherwise necessarily approached us,” she said.

Only The Sun-Herald ran a critical story on 22 November: 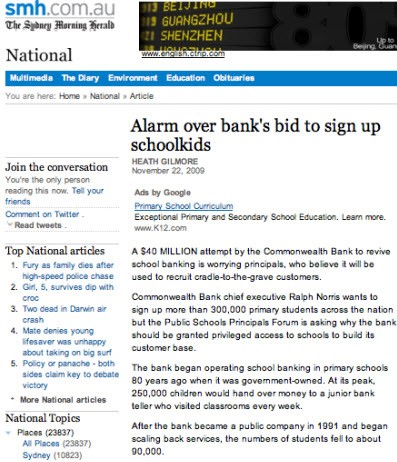 The article focused on the concerns of school principals and consumer advocacy group Choice about whether the CBA was: “…appealing to kids and their parents about money management or more about building a customer base.”

Chairwoman of the Public Schools Principals Forum, Cheryl McBride, who was quoted in the Sun-Herald article, in an interview with the reporter of this story said:

“In fact we [PSPF] have policy around those things to ensure children are not exploited so their minds are not polluted by biased advertising. And that is what this is all about. It is not altruism. It is not about a financial literacy program. If it was then they would provide that without all the Dollarmites people and gimmicky toys etc. etc. This is about marketing – and it’s quite clever. And maybe as a Commonwealth Bank shareholder I think it is a great idea, but as an educator I think it is appalling.”

Media Game made headlines again in July 2008, when an interview with Australian champion hurdler Jana Rawlinson, announcing her withdrawal from the Beijing Olympics, was exposed by the ABC’s Media Watch as a staged PR sham. Made with the help of her Elite Sports Properties team, the ‘interview’ was neither recorded at a press conference nor conducted by the media. The audio news release was aired on radio stations around the country, but not all reports disclosed the use of the prepared statement.

ABC local radio program The World Today explained to its listeners the Rawlinson grab used was from “an interview with her management team.”

According to Media Game Managing Director Warren Sim, it’s not necessarily the company that spins the story. “Ultimately it will be the client who comes up with the story and news angle they want to get across and then we either formulate the questions on behalf of the client or the client provides them and we follow through on their brief”.

Media Game’s services have another appealing feature, according to Sim, who says his company can turn an audio news release around within 45 minutes.

“So it’s a very effective to tool for companies or PR companies to utilise as a crisis management tool,” he said.

Sim said a story put to air by a metropolitan commercial radio station could be repeated on its regional networks.

“It may filter out through their network, for example, Macquarie Regional radio network provides news to 120 different regional stations throughout the country. If Macquarie Regional Radio picks up one of our audio grabs there is a fair chance that it has appeared, has been heard on a majority of those stations,” he said.

Alison Drower, the group news director for regional TV and radio stations owned by the Macquarie Southern Cross Media, which Sim was referring to, said audio news release material might be used for less than one per cent of news produced each year because of format constraints and the need for local content.

“We don’t do any pre-packaged content as far as I know. Like every newsroom we get video news releases and we receive audio grabs attached to email press releases and things like that.

“…We have a news force of 56 journalists for regional Australia doing TV and radio. And they’re fairly resourceful themselves and on the radio side of the business they resource their own content in the way of audio grabs and seeking their own interview opportunities.”

But she said that when supplied audio content is used, it is not disclosed by the radio station.

“Not really. I think anything blatantly advertorial sticks out like a sore thumb anyway and that is not a path we go down. Why would we promote someone else’s client when we have a whole network of clients to promote ourselves…Not that news is ever compromised on that level,” said Drower.

Despite the fact an interview with CBA chief executive Ralph Norris promoting the CBA’s financial literacy initiative featured on her radio station, Sydney AM radio station 2GB news director Erin Maher said the general policy is not to use audio news release content.

During the interview, Norris said the fund injection into the financial literacy program would enable school children to learn about net banking in an entertaining way.

“I think we have reached the stage now where children are much keener and probably looking at what their balance is on the net, being able to, as you say: use a debit card in conjunction with the product,” he said.

“I think we can really do a lot in actually improving and innovating the school banking product and that is our intention, but with that a series of education programs that are fun. They have got to be delivered in a way that is going to make them entertaining and we’re doing work with Disney to bring out a new range of initiatives in that area.”

“If it is for a charity or something like that we would consider it but otherwise we would prefer to actually do the interviews ourselves,” said Maher. “It’s too much PR if someone is sending us something they want to say. That’s not what we’re here for to be honest. They can buy advertising space if that is what they want to do.

She said their station uses charity-generated audio content infrequently: “The best I could say is once or twice a month but I couldn’t even be confident of that.”

And what about the stations’ policies of disclosure, when the supplied audio content is used?

“No, they are provided to us from Media Game and places like that. They provide it to us and let us use them with no credit there,” said Maher.

Monique Dews, News director of Vega, another radio station where we heard the CBA message, said pre-packaged audio grabs will be used if it passes the news evaluation process.

“We would assess it like we would any other news story that comes across our desk,” said Dews. “First we want to know is it a genuine news story with a news hook or is it a PR company or private company pushing their own barrow with their audio attached? So that is the first thing we look at. We don’t want to just run a piece of audio which is like an unpaid ad in the news as opposed to a genuine news story.”

But the CBA promos certainly slipped through.

Like Maher, Dews said charity-generated audio releases might commonly get a run if the story is relevant to its audience, but it would probably be placed at the end of a bulletin.

And when it comes to disclosure about the source Dews did not see it as an issue: “(It’s) not relevant to our listeners, they don’t care.”

Biwa Kwan is a student doing a combined degree in Journalism and International studies who is currently studying in China.

Now the news … and an ad: 2UE tests radio rules

No show in radio business: jocks make way for ‘integration’

One of the key reaqsons that the pre-generated, audio visual media release is uncommon, is that the vast array of individual organisations who issue media releases simply cannot afford to utilise these services.

For example, manufacturing company A has a new wingnut making machine, which allows them to produce new wingnuts faster, cheaper and with fewer quality control errors.

That’s good news for A and their legion of customers. They get either their Sales / Marketing / Comms person to whip up a release, or they get a small (usually suburban) PR agency to do so.

Compare that cost with the time involved to produce an Audio-visual release. The costs will be significantly higher, and then there is the distribution channels required.

In addition, many of the specialist media are not set up to use such a release, with trade publications usually text-only mediums.

The audio-visual media release is really for the largest of organisations who have messages of interest to the daily electronic media and who are willing to pay for it.

It’s alarming to see journalism standards caving in to commercial pressures in the media. Newsrooms that use pre-packaged content often do so because they do not have the human resources to pursue the stories they’d like, in the manner they would prefer. PR companies know this and target pre-cut audio at smaller radio stations in particular, where there is usually only one journalist who may not have the experience or the time, to send it to where it belongs – the computer’s wastebasket. By the way, our radio stations have a firm policy stipulating that pre-cut audio is not to be used in our news services under any circumstances.