Electioneering pollies get the coverage

Beyond the state contests, the media focus last week remained totally on health and on the leaders, with Nicola Roxon dropping a spot and Peter Dutton not even making the Top 20.

A quite extraordinary study in targeted campaigning in the face of huge swings from the ALP this week, with Mike Rann’s government hanging on, in the end almost comfortably, with only 48% of the TPP vote, while the Tasmanian ALP still has a chance of having more seats despite being two per cent behind the Liberals in a proportional voting system. Some lessons for campaigners everywhere amongst that lot.

Beyond the state contests the focus remained totally on health, and on the leaders, with Nicola Roxon dropping a spot and Peter Dutton not even making the Top 20. Tony Abbott is maintaining his far greater level of coverage than his two predecessors, the Government’s decision to focus on him and the fact it’s an election year adding to his own concerted media efforts.

Wilson Tuckey and Colin Barnett the only other upwards movers, Wilson mainly due to his delightful comments the week before, Barnett owing to the massive storm that ripped through Perth. 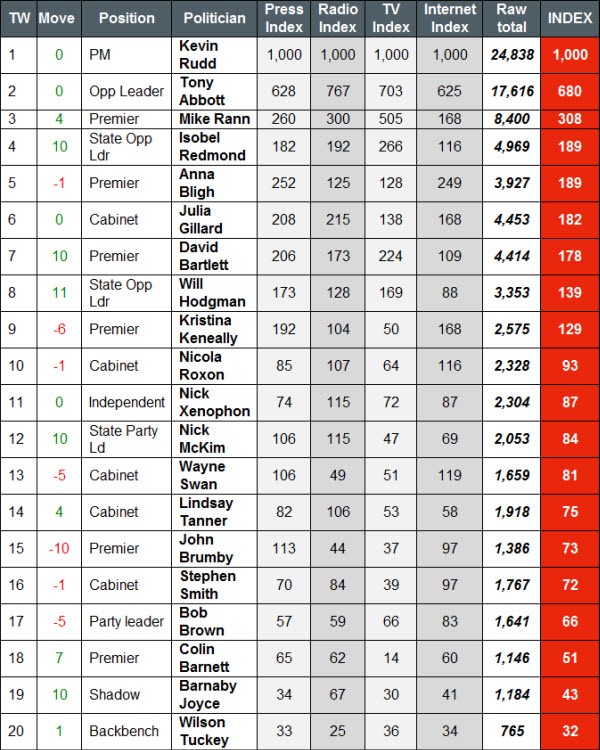 The media rendered almost entirely irrelevant by the completely closed Chinese “justice” system, as we all just have to guess at what the future holds for Stern Hu.