Critic ­and AMP judge Clem Bastow offers a inside perspective on the Australian Music Prize winner "controversy": there is no great conspiracy.

For an award that many of Australia’s rock cognoscenti and armchair critics claim not to give a rat’s arse about, the announcement of the Australian Music Prize winner — Lisa Mitchell’s Wonder — last week certainly inspired a lot of passionate blogging.

Over at Pedestrian.tv, in a piece titled Conspiracy Theory: How Lisa Mitchell Won The Australian Music Prize By Default, “Ash” offered up in-depth theorising as to why and how Lisa Mitchell won The Amp 2009. It was a compelling tour de force, with just one problem: none of it was true.

Central to Ash’s argument was a graphic that tallied a series of notable artists’ success rates across three major awards — Triple J’s J Award, the ARIAs, and The Amp — since the AMP’s institution in 2005; the point being to prove that no artist who has won either a J Award or an ARIA can also win The Amp (i.e. suffer the little Hilltop Hoods): 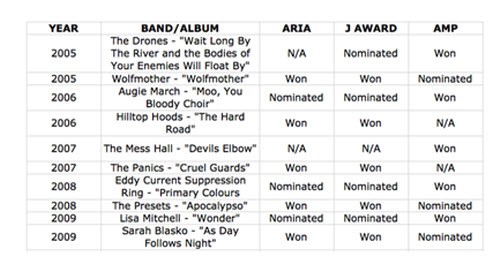 It’s bunkum. If a particular artist had also won a J Award and/or an ARIA and was deemed, throughout the judging process, to be the worthy winner, they would win. Such a suggestion plays into the commonly held idea that The Amp “should” support independent music, or artists without a major label deal, when what The Amp does support is good Australian music. Whether it was recorded at eye-watering cost on a ProTools rig made of platinum, or for $78 in a public toilet with a tape recorder, it’s the music that is judged. Likewise, major label signings or mainstream exposure has no bearing.

In short, as The Ampy 2009 Charter notes, commercial sales, success (or lack thereof) or musical genre are immaterial when it comes to the judges deliberation.

Elsewhere in the blogosphere, Everett True — in a post subtly titled The Ongoing Disgrace Of Australia’s Critical Community — argues, like Ash at Pedestrian, that Sarah Blasko was the rightful winner. Referring to the Pedestrian piece, True demands, “If you were one of the critics involved waking up yesterday morning to this article, wouldn’t you resign your post as judge in shame?”

No, Everett, I wouldn’t, because the article is hooey.

Then again, I have probably “disgraced” my profession in True’s eyes, because I think — and always have, for those who care to wade into the annals of my street press output — that Lisa Mitchell is making some of the best music in the country.

There’s a playfulness to Wonder, coupled with the poignant openness of her lyrics, that is utterly captivating; her arrangements, thrown together in a haphazard manner, feel new. Blasko has also made a beautiful album, but its beauty has a glassiness that is distancing, and the arrangements — while glorious at times — draw deeply from a pop wellspring that reaches back through Joni Mitchell and beyond. To suggest that As Day Follows Night in some way broke new ground is off the mark; instead, it revisited old ground in a beguiling way.

Who cares, though? All nine albums in the shortlist made it there because they all had the potential to be deemed the year’s best; at the end of the judging session, it was Mitchell’s album that was voted the best of the best.

The great irony of both True and Ash’s pieces is that they fall into the hole that we AMP judges have apparently been wallowing in since the judging process began last year: dithering over the need to award an artist not on the merits of the album released, but because the artist is a woman. This is why we can’t have nice things.

Evidently, this choice — drawn from all the myriad female artists in Australia, and particularly, the four (Mitchell, Blasko, Lucie Thorne and Bertie Blackman) who made it to the AMP shortlist — comes down to one between Mitchell and Blasko.

Or, as True puts it: “The Australian Music Prize For Anyone Who’s Female (Because We Arbitrarily Decided In Advance We Were Going To Give The Award To A Female This Year), But Not Sarah Blasko (Because She’s Already Got A Couple Of Awards And She’s Becoming A Bit Of A Tall Poppy) And Definitely Not Anyone Who Won An Aria Or J Award.”

Let me pose a question to those complaining about the result: have you listened to Lisa Mitchell’s album? In full? In full, multiple times over the course of a number of months? Because that’s what The Ampy judges did, for all nine of the records on the shortlist.

We’re human; not everyone who works in the music business, whether in retail, performance, or journalism (the three pools The Amp judges are drawn from) has either the time or inclination to hear every piece of music released each year. Some judges entered the judging process having already listened to and loved (or hated) albums that ended up on the longlist and then the shortlist. Others were hearing them for the first time.

I was in the former category in the case of a number of albums that ended up staying the distance. Both Mitchell and Blasko, and Black Cab’s fellow shortlisted record Call Signs, had featured heavily in my 2009 ‘playlist’ (both on my radio show as well as in my own time). There were also plenty of albums I loved and would have argued to the death for that didn’t even make it to the longlist. And there were, perhaps most relevantly, records that I came to appreciate on a deeper level throughout the judging (listening) process.

This is how, as mindblowing as it seems to be to some, a record that “barely factored into [the judges’] personal recommendations at all”, as Ash put it, ended up winning, and how Blasko “lost”. One record revealed its strengths to more of the judges, and others’ diminished with more time spent examining them. And despite True’s deeming the result as a collective failure of critical thought, it’s worth noting that the critic/journalist portion of The Amp judging panel is outnumbered by artists and music retailers.

There’s so much for people to complain about in Mitchell having been announced as winner that the detractors must have clapped their hands with glee at the result: she’s female (tokenism!), she’s young (she hasn’t paid her dues!), she was once on Australian Idol (hurting our artists!), and she made a pop album (that’s not real music!).

But the most important factor in Mitchell’s having won the Australian Music Prize is the one that is so frequently forgotten in the maelstrom of such invented “controversy”: her music. If more people actually listened to it, we likely wouldn’t be having this conversation, but imagining a day that will happen is truly a thing of wonder.

It’s good that recognition is given across the musical spectrum and there’s not really any controversy other than, shock horror, different people like different music. Of course, some of these people have more influence over the listening habits of others than the rest of us, but that’s just life.

So is the chart accurate or not? Just interested to know.

“Let me pose a question to those complaining about the result: have you listened to Lisa Mitchell’s album? In full? In full, multiple times over the course of a number of months?”

Yup, much to my own surprised pleasure despite 30 years on the judgemental side of the industry. It’s superb and lastingly so, just like her steadfastly independent, characterful and distinctive appearances on what may just be the root cause of all this hoo-haa, Australian Idol, were. I can hardly imagine the pressure a teenage singer/songwriter is under from all sides to conform to one of the generic Idol templates, but to resist the inevitable dismissals and slagging-off and come up with this collection of durable, eccentric, revealing and engaging tunes and songs (without being remotely trite or over-familiar) is a ringing testament to her musical and personal character. And to an exceptional songwriter’s lifetime of observations to date. Now comes the really tricky bit: the second one. Onya, Lisa, and onya judges . . .