Tasmanian Greens in a quandary

Don't take Tasmania's Greens for granted, why Rann can thank the pollsters for his victory, expect an increasingly thorough analysis from the Coalition of Hawker Britton's client list, and more thoughts from Richard Farmer.

A big problem for Nick. In all the commentary I have read about what will happen in Tasmania there seems to be an assumption that the Greens can be taken for granted. It is as if the only relevant statement is that of Labor Premier David Bartlett that the leader of the party with the most members should be asked by the Governor to become Premier and if two have the same number the nod should go to the leader of the party that gained most votes statewide.

Now that may be a very fair and just approach if you think the wishes of the overwhelming majority of Tasmanians who voted for a party to the left of the Liberals should be ignored. Liberal Leader Will Hodgman clearly thinks that his team’s tick over 39% of the vote should win over the combined 58% of Labor and Greens. He was very eager on Saturday night to take Premier Bartlett at his word and award himself the Premier’s mantle when it emerged that 10 Liberal, 10 Labor and 5 Greens was the most likely result. 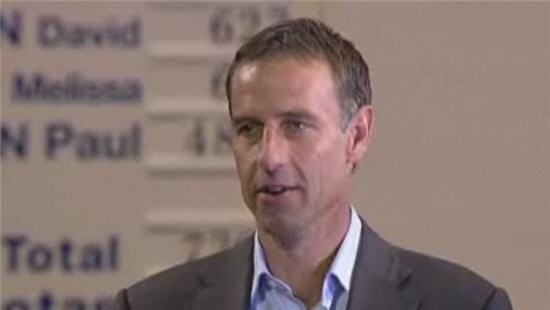 The Greens leader Nick McKim (pictured) was naturally enough taking a different view. For him the sensible course of events is for there to be discussion between the three parties to work out the best way of ensuring the state has the most stable government possible when no one has a majority of the 25 seats.

Labor under David Bartlett ruled out such discussions, so the commentariat reached the immediate consensus that Hodgman, if the Liberals do reach the 10 seat figure or more, will be called on by the Governor to form a government. Yet what if the Greens unilaterally declare they would guarantee a Labor Government the passage of supply and thus a basic stability to administration but would not do so if there was a Liberal Party Premier?

Such a thought should enter the McKim mind because the overwhelming majority of those that voted for his party are to the left of the Tasmanian Labor Party, let alone the Tasmanian Liberal Party. They surely did not vote Green so that there would be a truly conservative administration. If the Greens elected to Parliament anoint conservative rule for the next four years, there will be much disappointment among their supporters. The risk of losing support next time around would be considerable.

That makes me think this is not yet the open and shut scenario that is being so widely predicted.

A classic case. The impact that can come for an incumbent government of being seen as the underdog was never so evident as in this South Australian election. The way that Labor got punished in its safe seats yet hung on in areas where people knew that their vote really mattered is a classic case of underdog benefit. If Mike Rann survives as Premier, as seems likely, he can thank the pollsters for his victory. It was Newspoll in The Australian and the polls in the Adelaide Advertiser showing Labor facing defeat that saved him.

A little myth making. Things must have been very convivial on the set of Sky News on Saturday night between commentators Peter van Onselen and Bruce Hawker because the van Onselen piece in this morning’s Oz gushingly gives praise to the Hawker role in the South Australian Labor victory. “As Labor prepared to enter the final week of a fraught election campaign,” wrote van Onselen, “the news was particularly alarming. The ALP was tracking behind the Liberals, and the momentum was with the opposition. Rann’s standing had become a drag on the party vote, and some of his closest advisers were losing their nerve. They wanted Rann to tear up his campaign script about low unemployment, strong economic growth and access to the ear of Kevin Rudd. Instead, Rann should respond to the lines being put out by the plain-speaking Opposition Leader, Isobel Redmond. But Bruce Hawker knew better. This was no time to blink, he told the doubters. The strategy he had led from the start — based on holding a handful of key marginal metropolitan seats — was sound.”

Now it’s true that Premier Rann was effusive on election night in his praise of Bruce Hawker as “the greatest strategist in Australia”. That was certainly a big rap and worthy of noting but we could hardly have expected a party leader to give thanks to his true campaign geniuses. Thanking Newspoll for giving him a truly underdog campaign just wouldn’t have sounded right to the assembled Party faithful as a prelude to remarks about the sweetest victory of all.

Expect many Hawker Britton examinations.  We can now expect an increasingly thorough analysis from the Coalition of Hawker Britton’s client list and decisions made by the Rudd Government in the run up to the Federal election. 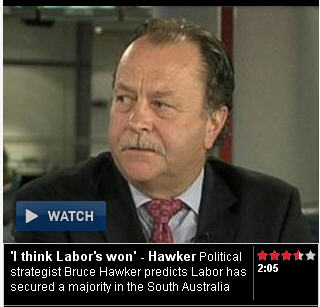 The Liberals are already getting some traction with their claim that Federal Labor is all spin and no action. Having the acclaimed spin doctor on television panels as a commentator might not be the wisest strategy in the months ahead.

Crikey Clarifier: why does the govt spend big on media monitoring?

After the chaos of Rudd, Hawker not invited back to SA

Make it harder to select and to depose

So if the polls had predicted a Rann victory he would have lost, but since they predicted his defeat he won???

Richard Farmer, I don’t know that you’ve been following the campaign closely enough. It wasn’t front and centre in the Liberal campaign, but there were many instances (e.g. making positive noises about restoring the size of the Lower House) when Hodgman was clearly reaching out to the Greens and their supporters. Not through any realistic hope of gaining their first preference, but in anticipation of precisely the current situation. The level of disgust with Labor within many elements of the Tasmanian Greens should not be underestimated. The distribution of Greens preferences will be a very interesting pointer to this.

Nigel
Precisely.
This politics is a very perverse game
Richard