Could the Weight Watchers deal with Maccas promote weight gain?

Adrian Bauman, Lesley King and Louise Baur explain how a new deal between McDonald's and Weight Watchers to promote "healthy choices" could actually see more people eating junk -- and both companies will reap the rewards.

The complexities of nutrition politics and food marketing are starting to rival those of big tobacco, car producers and the sedentary-inducing entertainment industry. Most recently, McDonald’s has announced a partnership with Weight Watchers, initially in New Zealand, to market healthy choices in all McDonald’s stores. These choices are indeed healthier than the usual Maccas choices, but the new development is they are now endorsed by Weight Watchers NZ.

What is not clear is whether consumers are likely to actually choose these healthier items, or whether having the Weight Watchers co-endorsement on the door brings more customers in the door, and produces a differentially greater increase in the consumption of “less healthy” McDonald’s food items.

Actual sales data are always “commercial in confidence”, so we will never know the truth on this, but in three hypothetical diagrams below we illustrate the possible trends in McDonald’s food sales, and in figures 2 and 3 what the partnership with Weight Watchers might hypothetically do [shown after the arrow]. The status quo (Figure 1 below) shows the healthy options as a small fraction, perhaps around 10% of sales of the less healthy [non-core] options, such as burgers, fries and soft drinks. 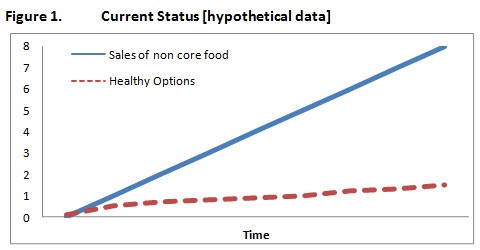 The partnership with Weight Watchers could have a detrimental effect on the population’s diet (Figure 2 below) if the Weight Watchers co-branding brought more people into McDonald’s, and the majority of these consumed “less healthy McDonald’s choices”. Then, over time, the total sales volume would increase, but most of this would be attributable to sales of burgers, fries and soft drink. 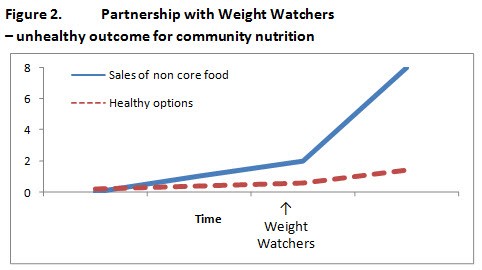 Only in the scenario depicted in Figure 3 (below) would the community have a potential benefit. This scenario shows the proportion of total McDonald’s sales that comprise “healthy choices” increasing relatively faster over time, as a result of the Weight Watchers’ badging. 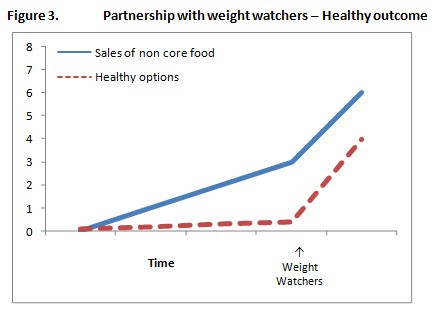 We will never know which of these scenarios really occurs, as this information will be considered as “commercial in confidence”, but scenario 2 is commercially advantageous for McDonald’s and potentially, Weight Watchers. In this scenario, McDonald’s will gain in total sales and the financial bottom line. So will our bottom sizes.  The proportion of these sales that are healthy may actually diminish as a result of the Weight Watchers intervention.  Nevertheless, the community perception could be that McDonald’s “cares about healthy nutrition” and is partnering with a credible agency.

From the Weight Watchers perspective, the number of referrals through direct links on tray mats and in McDonald’s stores could boost their bottom line just as much.  Thus the commercial outcomes outweigh the health argument. The latter may just be about creating the perception of corporate social responsibility.

With due acknowledgment, McDonald’s has made real changes to the saturated fat and oils in its cooking, and to the amount of sugar in its bread (sugar added to bread ?! — perhaps it might not have been needed in the first place, other than to habituate the palates of millions to high fat, high sugar foods).

Previously, Maccas has partnered with the Heart Foundation on the Pick the Tick campaign. Many food multinationals have similarly partnered with non-government organisations in other countries.

If only we could see which of scenario 2 or 3 actually occurred in this type of “partnership”, we could understand whether this was in fact improved public health, or just promoting the corporate [and our] bottom line.

*Adrian Bauman, Lesley A King, Louise A Baur are from the Prevention Research Collaboration at the University of Sydney

OK, it may not be a race. Let’s just call it a competition for the harshest lockdown

Just so you know, there are already plenty of decrees directing your daily life

I think the verdict is already in on this. A number of US studies that found that the presence of ‘healthy choices’ in fast-food venue is a great PR move for these companies but not does actually encourage consumers to make health choices. (See, for example, ‘Healthy fast-food options encourage unhealthy choices’, the report of a US study at: http://www.ausfoodnews.com.au/2009/04/27/healthy-fast-food-options-encourage-unhealthy-choices.html) Apparently what happens is that adding one or two healthy items to a menu causes most consumers to make drastically worse choices. Why? Perhaps a closer working relationship between health promoters and consumer behaviour experts would be productive in answering questions such as this.

Marketers of mega calorie foods are always trying to think up clever ways of getting by someone they call the “Gatekeeper or Guardian” (or less politely – the dragon). In other words, to sell the food that the addicted masses want to eat (i.e. high fat, high sugar, high salt plus additives delivered in a medium), they have to work out a way to make it psychologically acceptable for the family “gatekeeper” (usually mum), to be able to give in to the constant urgings of her mind controlled progeny and visit Kalorama.

So marketers have devised a very clever technique. You offer a bunch of foods that are on the menu which hardly anyone buys (because they are low in sugar, fat and salt among other things) which the customer feels so much better about when they arrive because they are on the menu. Voila! Instant reduction of cognitive dissonance. So thereafter, customer feels free to indulge in what they really want. Instant absolution is another way of looking at it. I think it is a bit like telling a junkie that if they buy from you, they don’t have to buy the hard stuff ; no no no… you also sell aspirin and other painkillers which will also ease their “pain”.

In this Babylonian Mercantilian economic system we have been herded into, the only way to get out of it is to stop being part of it. Stop buying the crap that could contribute to your physical demise or which is capable of removing an additional IQ point every month. But few are likely to do that in the next 20 years and why would they when they can have Idol, Dancing with Stars and a takeaway high fat, high sugar, high salt plus additives in a medium delivered, for $25.

I am being too harsh?

RICHARD WILSON: No, you’re not being too harsh. But there’s another aspect to it.

I live in an area where tourists like to come and visit. The other week I was having lunch at a café/restaurant when four people came in. The parents were morbidly (is that the right word?) obese-grotesque, in fact. They had two boys with them-sons, who were heading in the same direction as their parents.

The café does a lot of business at lunch time, and offers basic Italian food, nothing exquisite but OK.

I don’t know how they managed it but they found a way to order a huge helping of food saturated in fat, followed by a sweet course that would have sunk the Titanic.
My question is: Why go to all the trouble of visiting a tourist area just so they can eat the same crap as they have at McDonalds, at home?

This grubby little coupling is as odious as the CWA throwing their lot in with Woolworth’s.

They knew full well what this corporation and its little mate has done to rural food producers. They should do, many of them are the wives of those farmers.

But…, a buck or two was to be made so sod the principles!

Likewise, this latest two, but I suspect;-I hope,-it will rebound on WW.

As ugly as any junk food outlet trying to sanitise itself by sponsoring school programmes.

The Heart Foundation engagement with McDonalds has been going now for some time. Here’s a piece I wrote in the SMH in Feb 2008 http://tiny.cc/L7Y5S The outstanding question — asked by my three colleagues again now re WW, is whether the net effect of these deals is to increase total consumption of the non-tick products, an effect which would swamp the benefits of increases in the tick products. I and other colleagues have raised this since with the Heart Foundation, but I have still not seen any data addressing that point.

The “commercial in confidence” response is surely past its use-by date. This is a major dietary initiative and it is in the public interest for an icon like the Heart Foundation to be more transparent about whether its introduction has been associated with a reduction or an increase in consumption of McDonalds non-tick fare.