Ziggy voted down in public debate on nuclear energy

A pro-nuclear camp led by nuclear physics boffin Dr Ziggy Switkowski failed to convince a crowd of sceptics that uranium is a solution to a carbon-constrained future, Timothy Roberts reports.

Apparently, we absorb more radiation from bananas than from nuclear power.

Which was easily the silliest contribution to a debate on Australia’s energy future at the Melbourne Town Hall last night. But even the more reasoned responses from a pro-nuclear camp led by nuclear physics boffin Dr Ziggy Switkowski failed to convince the crowd uranium is a solution to a carbon-constrained future.

Ziggy insists nuclear is safe, cheap and, now, virtually ubiquitous. Even Ukraine is building more reactors in the wake of the Chernobyl disaster, he says, and Australia remains alone as the world’s largest non-nuclear economy.

“Reasonable people agree…coal makes way to gas makes way to nuclear,” he said in the first of a series of Intelligence Squared debates organised by the Wheeler Centre. It didn’t play well.

James Hansen, who brought the global warming problem to the world’s attention in the 1980s, backs nuclear as a solution. “Fourth-generation” reactors have improved safety and efficiency, he told the debate.

Nuclear supporter Dr Erica Smyth went on to declare nuclear a “perfect solution” given Australia’s “ideal population”. Her centrepiece suggestion: matching sets of nuclear and desalination plants (needed to cool the reactors) up and down the Australian coast.

But opponents insist safety remains an issue. “We cannot ignore the very real fear of catastrophic nuclear accidents,” EcoFutures‘ Molly Olson said, pointing to US nuclear industry subsidies of US$500 million a year as a sign the technology is an economic white elephant.

Those on the anti-nuclear side of the debate want to shift the focus to renewable energy. Why go nuclear, they ask, when renewable power sources like solar are more readily available. Ziggy and team are “renewable energy deniers”, according to Dr Mark Diesendorf from the Institute of Environmental Studies at the University of NSW.

Dr Diesendorf believes Australia could install a 100% renewable mix by 2020 using off-the-shelf technology — at an affordable cost of 3.5% of annual GDP. Renewables can provide base-load power, he insists, with new-generation 24/7 solar plants able to manufacture hydrogen or ethanol to export clean fuels to other countries.

In contrast, nuclear is “slow, dangerous, expensive and unnecessary”. And the audience agreed, voting overwhelmingly for the anti-nuclear cause after the debate. Ziggy has some work to do. 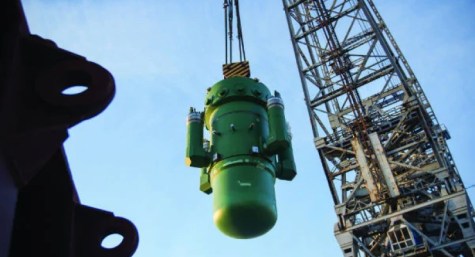 Australia was not ready for James Hansen

You state the audience was a not-in-favour group. I suspect you had an overwhelming eco/green group there to criticize. Those that would consider nuclear as a positive source of energy are the quiet ones who are not the natural attendees in such a debate.

A colleague of mine used to do an alternative energy journal called Third Opinion and it carried heaps of internationally sourced stories. When I read Peter Costello in the SMH recently with a cheap throw away line about more killed by the insulation programme than by nuclear industry (here, world?) I remembered the front cover of one edition.

It was a nuclear plant in the USA that was de-commissioned. Guess what? There was a uniform reduction in cancer rates. Statistically significant and all that. A profound before and after population analysis. A slam dunk on the poor safety of that facility. I recall in about 2002 quoting that study to NSW Health bureaucrats at a public meeting at the commissioning of the unfiltered M5 tunnel freeway in Sydney and

1. They knew of the study.
2. They agreed baseline health statistics of health of local people was valid way of measuring likely health impacts of the pollution plume.

In other words Costello didn’t have a clue about public health issues around nuclear energy. No doubt I will have to drag the study out from my files and blog it. Stay tuned.

the dangers of the whole cycle, which includes mining, milling, enriching and security & secure storage of wastes – including low level to high level waste, such as plutonium.

the costs of building the reactor, and what percentange of the costs is met by govts – that is the people; us

the cost of securing the site/s and transport etc for the removal of waste, to include that of the intelligence organisations(ASIO for instance) and State police forces;AFP and others.

the proliferation of nuclear material; human accidents/incidents/ honesty of govts reactor owners and others who have a vested interest in not informing the public – plenty of cases to refer to? Can’t safely install pink batts, I’m not inclined to put any govt in charge of the nuclear industry, particularly on a grand scale? It took Julie Bishop at least six questions before she admitted, that the Lucas Heights reactor had to shut down not long after it started up! Then she attacked the Opposition for even asking the question?

Howard gave the people the middle finger over the invasion of Iraq. In fact, he didn’t even allow discussion in the Parliament? Not good enough for me! Secrecy and a police state – no thanks! And that’s the only way so called security can be guaranteed – and then it’s not fool or foul proof!

as a person who lives on the east coast of NSW, and having the knowledge that reactors require plenty of water – much of which is wasted via steam etc( a resource not plentiful in this country – the driest inhabited continent) I can safely assume, that a site near me would be a suitable one, from the perspective of the pro-nuclear lobby – no thank you – in fact it was even mentioned prior to the 2007 election, and near a large industrial complex including BP and Mobil???

Everywhere in the world that a reactor has been de-commissioned, costs have blown out to the extreme, meaning that govts have no choice but to contribute – what do you do with an old reactor site – plant trees and allow the kiddies to fly their kites on it?

The US still does NOT have a permanent storage facility for high level waste? Each time it’s raised, the people start a legal case to stop it! This has been going on for some time now – even the Military are running out of storage space, and the domestic reactors have passed their use by date!

The US/Britain & France also use Depleted Uranium to make weapons – with horrific results. Watch, ‘The doctor, Depleted Uranium and the dying children of Iraq’? The numbers of these bombs dropped on Iraq during this last invasion has markedly increased from 1991/2? Deformed babies, childhood cancers and the same or similar for those military people who are/were there!

I find it amazing, that those who calmly push nuclear power, with very little honesty re the questions above are held to be calm, rational people, but people like me(particularly women) are irrational and emotional. There’s nothing calm or rational about giving birth to a baby with no brain or a huge, deformed head, or blindness or suffering many miscarriages and/or genetic mutations. That’s a reality to the women of Iraq, Bosnia, Afghanistan and too many others!

I read sometime last yr, that the first US military person who was in Iraq, died from cancer – linked to DU! How many Australians, and will they have to fight like those who witnessed atomic tests, or those who were in Hiroshima after the war ended?

Australia gets enough energy via the sun each day, to provide enough energy for the world for ONE YEAR! (ACF President, 7.30 Report ’07?). An Australian bloke is in California working on solar energy that will provide base load power – he says cheaper than nuclear, and maybe even cheaper than coal – that’s for me! He left this country as Howard wouldn’t help with financial support(and he’s not the first). A company in CA is and they’re most optimistic – Dr David ? said it would take about 5 yrs – this was in 2007(on 7,30 Report in Oct? ’07 – the transcript was still there late last year – look it up!) so it’s not long to wait now!

I’m not a scientist or physiciast or ?? but I do know, that I don’t want nuclear power in this country – it’s being pushed by those who are making money out of uranium mining etc, and as usual, they’re greedy bastards who don’t give a toss about my health and safety – or anyone elses’ either!

Not overly surprised the crowd voted against, it’s fairly easy to mount a scare/doubt campaign against nuclear.

The reference was here:

“Dramatic declines in local infant death and childhood cancer rates occurred soon after the closing of eight nuclear power plants, according to a new report announced by New York State Assemblyman Richard Brodsky, Radiation and Public Health Project, and the STAR Foundation. The study documents a 17.4% reduction in infant mortality in the downwind counties within 40 miles two years after reactor closing, compared to a national decline of just 6.4%. Large declines occurred in all eight areas near closed reactors, and remained above national trends for at least six years after closing. The information appears as an article published in the March/April 2002 edition of Archives of Environmental Health.

“We finally have reliable peer-reviewed accurate data attaching the nuclear power plants to death and injury in the host communities, this is a sobering and significant scientific study and we all need to take it seriously,” stated New York State Assemblyman Richard Brodsky. “It is critical that more studies of this type be performed, so that we fully understand the risks posed by nuclear reactors,” added Westchester County legislator Thomas Abinanti.

“Nuclear power is a failed experiment that is expensive and dangerous,” said Scott Cullen, Executive Director of STAR. “This study confirms the best of public health principles: that when you remove a known cause of illness, health improves,” said Cullen. “What is gratifying about the research is that it showed childhood health measures increasing so dramatically and quickly after the reactors closed and provides good news that we can strive towards.”

In three of the eight areas with available data, cancer diagnosed in children less than five years of age declined 25.0% in the seven years after reactor closing, compared to a 0.3% increase nationally. Children exposed to radiation are of increased risk for cancer, says Joseph Mangano, MPH MBA, the principal author of the study who is affiliated with the New York research group Radiation and Public Health Project.

This study is most relevant to New York City because over 8% of the nation’s population lives within 50 miles of the Indian Point reactor. Counties downwind and within 40 miles of Indian Point include the Bronx, Dutchess, Manhattan, Nassau, Putnam, Queens, and Westchester in New York, and Fairfield County in Connecticut. Over 8.5 million persons live in these counties, where 110,000 babies are born each year. ”