Naked Aboriginal kids on postcards: the line between art and exploitation?

You can buy postcards featuring naked Aboriginal kids in newsagencies and Australia Post shops across the country. Why aren't these pictures treated with the same outrage as Bill Henson's photos of naked teens?

Yesterday I walked through the Alice Springs Mall, stopped at a few tourist and souvenir shops and bought a few postcards. One group of postcards that caught my eye was those with pictures of naked or semi-naked Aboriginal children.

You can buy these cards in many outlets in the Alice and across the country — souvenir shops, backpacker hostels, newsagents, Australia Post, hotels. And if you are too slack to walk down the road, you can get them on the net — have a look for yourself here, here and here.

The release by NSW Attorney-General John Hatzistergos of his Government’s Report of the Child Pornography Working Party last month raised questions about what is child pornography in the strict sense. The postcards are a prime example. 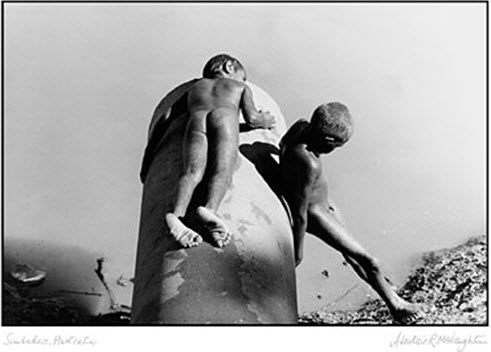 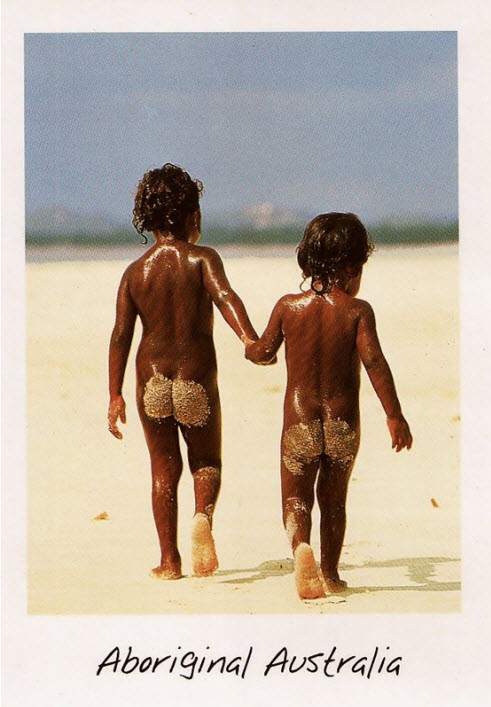 But most of the media appear to have missed what is the real meat-and-potatoes in the report. As page 35 the report notes:

That is, there is no objective measure by which the courts can assess the severity or otherwise of one image depicting abuse against another. The Working Party recommended that the joint Queensland and Federal Police adaption of a Microsoft program known as the Child Exploitation Tracking System (CETS) be implemented in all Australian jurisdictions.

CETS would provide the courts with prescribed categories based on escalating degrees of the seriousness of what would be categorised as Child Exploitation Material (CEM): 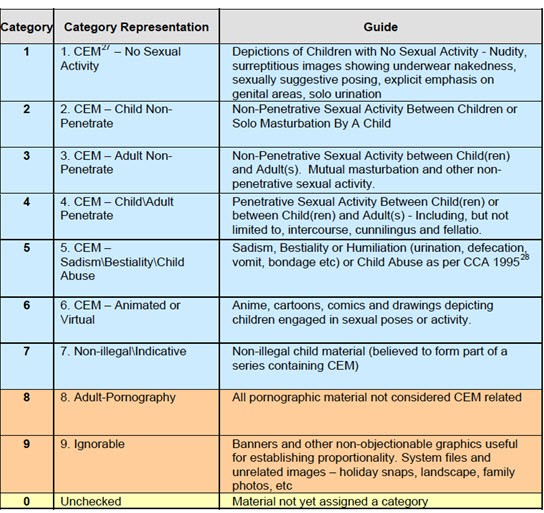 It’s pretty clear that Henson’s photographs would fall firmly within CETS category 1, as would most of the postcards. As it states:

But there are issues other than the categorisation of the content of the postcards that warrant closer scrutiny.

Crikey spoke to Charlie King, an Aboriginal man who for many years has worked in the field of child protection and abuse prevention in the NT and currently runs a family violence awareness program for the charity CatholicCare. We asked King if people would bother to produce or buy postcards that depicted naked white, Asian or Middle-Eastern kids?

“Just try it! Go and get a photographer, shoot the exact same photos with white kids and put them in the shops and see what happens. There would be an absolute outcry, an absolute outcry. It would be totally unacceptable,” he said.

“This gets back to the double-standards and stereotyping of Aboriginal people that we see far too often. Many non-indigenous people have very little understanding of what indigenous people are all about.

“Who wants to buy these pictures of naked Aboriginal kids? Some of these kids are very close to teenage age … I don’t think shops should be allowed to sell this sort of image. I think if you asked people what they thought of these postcards that a majority of people would say that some of this stuff is very close to pornographic.”

Crikey also showed the postcards to Professor Larissa Behrendt, of the Jumbunna Indigenous House of Learning at UTS, during her recent visit to the Ampilatwatja walk-off camp 300 kilometres north-east of Alice Springs. She called them “disturbing”.

“On my way out here I’ve just driven past maybe a dozen huge NT intervention signs that have ‘no p-rnography’ plastered all over them. Knowing the strict line that the Rudd government takes on these issues it is rather disturbing to see these postcards that are so exploitative of Aboriginal kids,” she said. “The cruel irony is that when you see all of these punitive measures put in place to supposedly make people ‘better parents’, nothing has been done to stop this kind of blatant commercial exploitation of Aboriginal kids.”

Crikey contacted three of the photographers involved in the production of these postcards: Craig LaMotte, Peter Lik (postcards here) and Alastair McNaughton.  At the time of going to press only one responded.

McNaughton states on the back of his postcards and website that:

Royalties from his Australian Aboriginal images series of postcards, art prints and bookmarks are paid to the Aboriginal communities and Alastair maintains a close relationship with his friends there.

And, as McNaughton explained to Crikey, his photographers have a “background and context”, which should be considered. He says he lived and worked in the western desert community for four years before forming his Desert Images business.

“These photographs were all taken with the support and encouragement of the parents or guardians of the children and a legal agreement was made through the Aboriginal Legal Service,” he said. “This has been an ongoing agreement since 1996. The intention of my photographs has always been to show the more positive side to Aboriginal life in remote communities. I believe they suggest the joy and innocence of childhood.”

But King says parental permission is not enough.

“There are times when parents are going to make arrangements and sign things that they say are OK and that they are going to get paid money for it. I think we need legislation that backs up a system of classification,” he said. “And despite some photographers being able to strike a deal with mum and dad, there still should be strong legislation that prevents that being distributed. But there is a broader moral issue outside of that — we should not be peddling this sort of image around.”

Professor Behrendt points to the importance of context when considering this issue.

“Bill Henson’s photographs explore issues of teenage sexuality but we see them in the context of an art gallery,” she says. “These photographs are not taken with any notions of creativity or exploring a theme or trying to capture a moment that is meaningful and poignant — these postcards are just about crass commercialisation, that is all. The sandy beaches of Australia on young Aboriginal bums.”

Barns: Henson a victim of abuse of process

IANALB my understanding of the law is that if these are considered child p-rn of any sort all of us who have downloaded these pictures, and that includes the Sole email Subscribers, are guilty of p-rnography.

If you see anything s-xual or p-rnographic in these images, then I pity you and suggest you seek help. You have a dirty, poisoned mind. If you believe the rest of us should have restrictions placed on what we can see based on the fact that you get some weird titillation from viewing it yourself, then you are no better than the imams who insist women wear the burqa because otherwise men won’t be able to control themselves. And while we’re on the subject of damaging children, how healthy do you think the next generations will be if they are brought up to believe that any sight of a naked person is dirty and deviant?

It’s also ridiculous that cartoons are considered to be CEM as well.

This is a good article. The double standards whereby such postcards are socially acceptable if the subjects are indigenous children but unacceptable if they are mainstream children usually remain invisible to us.
A few years ago a teacher gave me the following insight – ‘racism is not necessarily what you do but also what you do not do, or see.’
Thank you for your article placing this topic into our view and consciousness. Also for making us conscious of a further example of the double standards in our society, where once again, the innocent and undefended amongst us are abused.