Garrett’s insulation scandal gets even hotter

Already under fire over the government’s foil insulation scheme, the scrutiny on Peter Garrett is set to reach boiling point today, with a report on last night’s ABC Lateline revealing that thousands more Australian homes could be at risk of fire from poorly installed solar panels, due to lax regulations and standards.

Meanwhile, the insulation scandal continues to burn, with dodgy businessmen and criminals coming out of the woodwork, and the Aluminium Foil Insulation Association calling for an immediate end to the scheme, with claims that up to 400,000 homes could be at risk.

With attacks on Garrett heating up again — and the wider debate on ministerial responsibility running equally hot, thanks to Stephen Conroy — he better slip, slop, slap.

Jennifer Hewett: Who’s gonna save me?

Rudd has no desire to wear the political cost of losing another minister, at least not yet … But that level of support isn’t guaranteed to continue if the political damage is seen as too great.

Every day the bungled home insulation program provides new disasters and every day the government jumps through linguistic hoops to avoid admitting responsibility, as if spin alone will absolve it.

… celebrity politicians can become dangerous because they usually don’t have the crucial political instincts, and don’t understand the culture, the accountability, or the boring things they must do to be on top of their game. 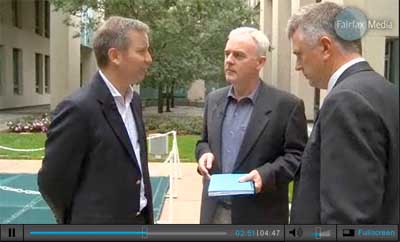 … surely common sense demands that before Peter Garrett is sacked, there should be coronial inquiries to determine why four people died, and who was responsible?

Peter Garrett is exonerated, nobody cares

Peter Garrett and the perpetual present of politics

“… celebrity politicians can become dangerous because they usually don’t have the crucial political instincts, and don’t understand the culture, the accountability, or the boring things they must do to be on top of their game.”

Midnight Oil made some good music but Garrett is dieing a slow and painful death in the world of politics. I still think he would have been better off joining the Greens than a major party.

I am tipping that Garrett will resign rather than a Rudd sacking.

Abbott asks “what moral universe does Rudd inhabit?”. The answer is- the same one as Howard, who finished off the convention of ministerial responsibility.

Rudd’s first response to the Garrett disaster was to say (to paraphrase) “Tragic deaths have occurred, but industrial accidents happen all the time”. His second response was along the lines of “the minister acted on advice from departmental advisors”: i.e. blame the suits.

The media have failed to grill Rudd on this- they don’t seem to appreciate that the type and locus of responsibility is the key. They should be down at the cemetery interviewing Mick Young and his teddy bear.

Abbott the Catholic moralist should be asked what he would do in Rudd’s position.

Where are these installers who did the work? Are they being attacked or blamed for the mistakes they made? Are they being peddled before the press with targets on their backs?

To say the minister is responsible for their actions/mistakes is just like saying a publican is to blame for an alcohol induced car accident miles away, three weeks later, because the bottle was bought at his hotel/bottlo. Sorry, the person who drank the bottle is the culprit.

A government can make rules and regs to protect people from themselves but they cannot be there to prevent every accident, just as the inister cannot be in every roof checking that people are doing the right thing.

The people who did the job need to take some responsibility for their actions. Our society seems hell-bent on blaming others for our own mistakes.

Now they are drawing a long bow with the solar panels. The Lateline story drew an unconnecting link to the insulation problems and suddenly every solar panel is faulty and its the govts. fault.

Give me a break!

The press and opposition need to take a long hard look at themselves. Abbott must be spending hours a week in the confessional with all the porky pies he’s telling at the moment.

For god’s sake grow up. Look at the bloody stats. 10,000 fires per year, not one due to solar panels and only 86 attributed to insulation.

What a pathetic frigging beat up.

So, if a publican tosses a crate of bottles over a fence into a closed-in field, and someone dies from alcohol-induced violence, would you not blame the publican even a little?