A tale of drinking, driving and bloody idiots

Some nice confected tabloid outrage at the increasingly negative Herald Sun today, with a cover story of a drink driving charge from seven years ago. Compare that to a rather similar drink driving story about the Hun's own editor.

“Drink drive judge”, screamed the splash in today’s Herald Sun atop a story concerning a new magistrate who blew 0.07 in 2003. 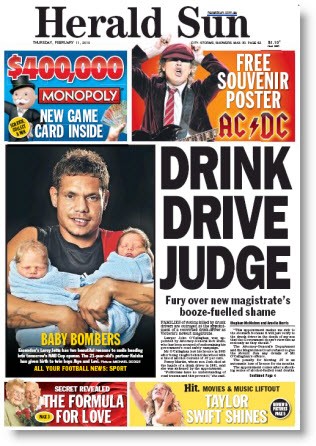 I was straight on the phone to Faine’s producer pointing out that then Herald Sun editor-in-chief Peter Blunden once went down with a reading of 0.125 but the coverage amounted to the following derisory 92 words on page 14:

The editor of the Herald Sun, Peter Blunden, was yesterday disqualified from driving for 12 months and fined $235 after pleading guilty to a drink-driving charge.

Defence lawyer Brian Bourke told Melbourne Magistrates’ Court that Mr Blunden, who was stopped for a random test in Melbourne on May 28 last year, had driven for 25 years without incident.

“There was nothing about his driving, your worship, other than the fact a booze bus was there,”‘ Mr Bourke said.

Mr Blunden said yesterday: “It was a serious mistake and I regret it deeply.”

Faine, as his prerogative, simply pointed out there were senior editors at the Herald Sun who had gone down but refused to name names saying he would “leave that to others”.

How gutless is that. So, dear readers, it is our humble duty to remind you of the tale of Peter Blunden, who for the past three years has been managing director of the Herald & Weekly Times.

As The Age reported at the time,

Blunden was not in court. Senior Constable Anne Marie Hindle said Blunden could not provide a proper breath sample because he has asthma so he was taken to a booze bus where a blood test was made.

Blunden told police he had had five drinks at the Red Emperor restaurant in Southgate — two pots of full-strength beer at the bar and a shared bottle of wine at dinner. He said he had been drinking since 7pm, more than three-and-a-half hours before he was caught.

While the Herald Sun omitted the great angle about Blunden claiming asthma prevented him from blowing into the bag, it did at least mention the conviction after the court case in their brief coverage.

However, Blunden certainly didn’t follow the earlier lead set by the then editor of The Age Mike Smith, who in 1992 broke the story of his own drink-driving folly before charges were even laid.

The Herald Sun, under Piers Akerman, ran a long story on page 3 about Smith, which was probably justified given the reading was 0.25 — exactly double Blunden’s effort, who himself was almost double the magistrate done over on today’s front page.

Blunden was furious with The Age’s editor Michael Gawenda for the coverage of his troubles in 2002 when it was a pretty straight up and down case of covering an embarrassing blunder by a powerful public figure who controlled much of the debate about most other powerful public figures in Melbourne.

As for the Herald Sun of today, this latest beat-up just confirms the increasingly negative tone being taken under the combative editor-in-chief Phil Gardiner and editor Simon Pristel.

Not since the days of Akerman has there been such a darkness about the paper, whether its crime beat ups, Andrew Bolt’s raving or petty attacks on councils.

And for Melbourne’s worst mainstream feedback sewer, you only have to go through the comments posted by Herald Sun readers.

At 9am today there were already 73 comments on the Magistrate hatchet job including this shocker at 12.26am from Patricia Colliver of Heathcote Junction: “Rob Hulls is a C#@* Head, he should be sacked”.

Let’s hope no one thinks that is “coke”. It will be interesting to see if attempted comments on Blunden’s own sins are published before the day is over.

Sam Maiden could be going to the big house

If memory serves, the other recent very public mea culpa was from Julian Ricci, Editor of the often maligned NT News who proactively splashed his own DUI story.

Perhaps the Hun should get a subscription to the NT News and pick up a few tips about journalism and editorial responsibility?