Finally: ACMA ruling on Elmo and Abby the ‘muppet fairy in training’

ACMA has finally responded to pressing viewer concerns about Sesame Street and its menacing connections to witchcraft. About time.

An anonymous Crikey reader sent us a link this morning to an important ACMA ruling filed in December. It concerns an ABC viewer’s complaint about Sesame Street: 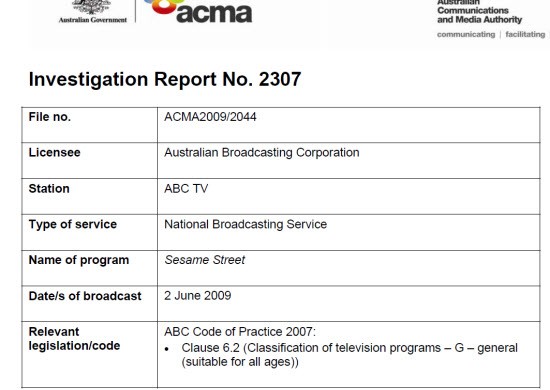 The complainant considered Elmo and co’s “witchcraft” to be “totally inappropriate for the target age group” and was unhappy with the ABC’s “invalidation of [their] complaint”:

In the licensee’s submission to ACMA, the ABC contended that they did “not believe Abby’s use of her magic wand in this context was an inappropriate theme for the program”:

The ABC based this decision on the “very mild scenes,” including the fact that “at 10 minutes”, Abby’s spell to “create more hats” backfires and “bats with hats appear on Elmo and Zoe’s heads instead.”

And, “at 13 minutes, Abby Caddaby calls her mother on her phone to ask for help, saying, “I need a spell.”:

Furthermore, the character of Abby Caddaby, who is described as a “three-year-old muppet fairy in training” is depicted in the program as a fairy, and has fairy-type wings on her back, and carries a pink fairy wand, which she uses to cast spells … The casting of spells in this context is not considered to constitute a depiction of witchcraft … While young children may mimic Abby’s use of a wand, and wear fairy wings, this is not considered to be dangerous behaviour”:

ACMA agreed with the ABC’s ruling and concluded that the themes contained a very “low sense of threat of menace.”

Commercial networks lobby to axe their own kids’ TV shows

For starters, what is referred to in the article has little if any relevance to witchcraft; the stereotyping here is innaccurate. And if it comes to dangerous things on TV, can we get a warning that watching fundamentalists could be dangerous – for people of all ages?

I’m sure the complaining parent has no such qualms about exposing his/her child to tales of a zombie god who is his own father – who came to Earth to die twice to save us from an eternity of agony because some tart took the advice of a talking snake.

If this complaint had been made to the relevent agency about an internet site or page would it have resulted in the site or page being banned?

It cannot just be co-incidence that this article is positioned immediately following the one on mental health.