The problem with peeking at dirty pics…thank god we have an heir!

Some pot calling the kettle black down at The Oz over the Packer heir affair, plus the trouble with looking at rudey pics at work: it helps if you're not on national television at the time and other media tidbits.

Peeking at dirty pics while on the job: The power of the internet means it’s now everywhere, but in case you haven’t seen the banker getting busted on national TV looking at some nakey pictures of Miranda Kerr, we present you the video:

Viral Kerr = GQ marketing gold: A tip for the marketing director of Conde Nast, publisher of GQ magazine — see if you can get a Macquarie banker to hold up a Miranda-Kerr-displaying iPad next time one of the bank’s boffins is being interviewed.

The viral element of the ‘Miranda Kerr’ news story, which has now gone global may not impress Macquarie clients (then again, male ‘independently wealthy’ types might have some sympathy for the Macquarie Private Wealth staffer’s habits), but for GQ the exposure is pure marketing gold.

GQ is tipped to be one of the early movers to publish an iPad-formated digital edition. The Guardian reports: “…Condé Nast is preparing for the iPad since quite a while [sic]. Sarah Chubb, president of Condé Nast Digital, said the company plans to have some of their magazines ready when the iPad ships in March. Stephanie Clifford of the always well informed Times’ Media Decoder blog is as specific as saying that Vanity Fair, Wired and GQ are likely candidatest to be the first. Sports Illustrated of Time Warner is also ready for take off.”

But how to convince a junior banker to hold up the iPad, which is so obviously optimised for peeks at Kerr? Perhaps arrange a discreet cocktail with the ubiquitous model? Perhaps give him a free iPad and a GQ subscription? Perhaps offer him a job as lens-polisher on the magazine’s exotic photo-shoots? Work that out, and your next viral marketing campaign is ready to roll. — Rob Burgess, former marketing journo and media studies lecturer.

Does global humiliation make you want to work in finance? Interesting ad placement on the banker/Kerr scandal. — Anonymous Crikey reader 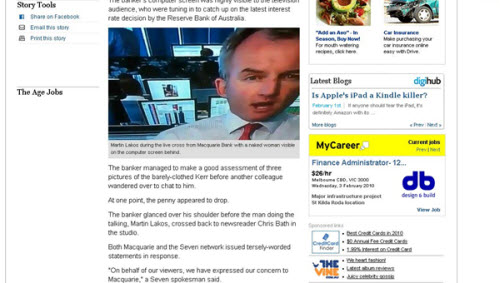 Thank god, we have an heir! Today’s Strewth column in The Oz takes a swipe at Andrew Hornery for mentioning the Packer heir in the cradle: 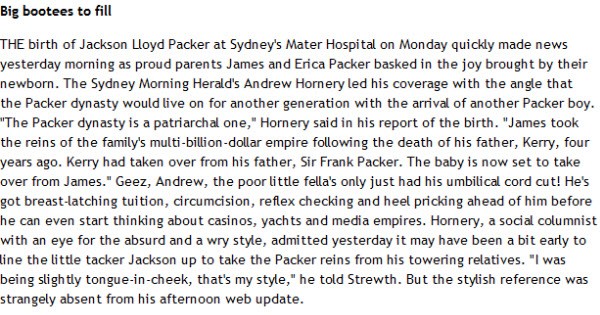 But look what we have here, the Daily Tele has a story about the Packer heir:

Will Strewth take a swipe at the Daily Tele? Surely not. — Anonymous Crikey reader

The Church of Scientology is planning its first above-the-line advertising push in Australia in a bid to turn around its public image.

TV and cinema are among the media being contemplated.  – mUmBRELLA

Grassroots TV to get big-time recognition

The 2010 Logie Awards will allow Community Television broadcasters to submit for its Outstanding categories for the first time.

The shift follows a campaign in 2009 by Channel 31 producer Shannon Marinko to submit The Bazura Project for consideration in a year when comedy was considered fairly slim. — TVtonight

Google Inc. is preparing to launch a store selling online business software that integrates with its Web services, according to people briefed by the company, enlisting software developers in its battle against Microsoft Corp. — Wall Street Journal

Spain is flouting European Union laws on maximum ad time by allowing telepromotions — features that blur the boundaries between programming and advertising — to air over and above the 12 minutes of commercial airtime that is legally permitted each hour.  — AdAge.com

Promising to announce major developments “in the next two months,” the owner of the Sun and Wall Street Journal said consumers want content on an array of devices, and are willing to pay. — The Telegraph

One of the things Sarah Palin has sought to do since stepping down from the governor’s office in Alaska is seize control of her image. So it is perhaps a sign of how difficult a task that remains for the GOP’s former vice presidential nominee that a new single-issue magazine has hit newsstands and convenience stores around the country. It claims to present “Sarah Palin: The Untold Story…in her own words!” — and it was produced, according to its publisher, without her knowledge or participation. — Washington Post