The Australian Hotel Association is making a fairly controversial move to keep their members' staff down in a lower pay bracket, more Myki gems, and which Queensland Labor Senator likes to play dress ups?

Australian Hotels Association is advising its members (ie. hotels, bars, etc) not to give training to staff OR recognise training staff have undertaken previously. This is because it would put staff into a higher pay bracket under the new Fair Work Australia legislation.

Another Myki gem: Keane India asking how to write a testing script for Myki in November last year. I hope they’ve changed the usernames and passwords! Project management for this project is non-existent!

The Nine Network is well into promoting its Golden Mile version of Underbelly. It’s all about Kings Cross in the 1990’s, allegedly. Some of the scenes are of Darlo and Bayswater Roads in the Cross, others are a bit of a mystery. They look all Kings Cross sleazy, but guess what, they’re not.

Because Kings Cross never sleeps, Nine and its producers, Screentime, couldn’t close off the main streets for all the shooting at night. So they were forced to go suburban, to the suburb of Lane Cove, which is middle class and a very long way from the Cross. So they paid Lane Cove Council a lot of money to close Longueville Road (the main drag) for several nights for filming of exteriors, such as ‘girls of the night’ walking down the street, shot in close up. Shops along the street were altered by set designers to look like the gaudy exteriors of King Cross joints. So far, it looks convincing.

$50m for NOT doing R&D — Under the car industry assistance plan, Holden, Ford and Toyota were to share some $150 million in Commonwealth R&D assistance from 2006 to 2010. Somehow these fine companies could only find enough projects to use up about $100m of the funds — but the taxpayers will be still be stumping up the extra $50million as a generous handout.

Which Queensland Labor Senator likes to play dress ups? None other than Mark Furner, ALP Senator for QLD, and former right wing union official, dressing up in army fatigues for his Christmas photo shoot. 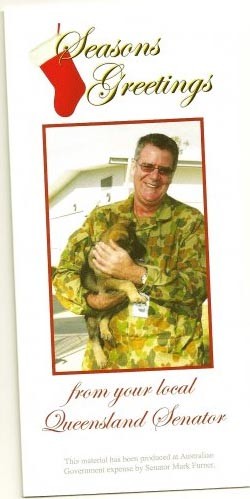 Aw, those loveable uber PC types down at Oxfam. Email sent to AllStaff:

This program is designed as an introductory session to get participants thinking about Indigenous issues.

As the very first white explorers rowed their way up a log-tangled river, they found their passage blocked by a small but formidable waterfall. Unable to go further they gave this river the local Aboriginal name “Yarra Yarra”. It was not until later this same party realized they had misunderstood the local Aboriginal inhabitants, the Kulin people, and had incorrectly named the river.The Ancestral Kulin name is Birrarung: the ‘River of Mists’.

In around ninety minutes this special walk gives patrons a sense of a small but significant portion of the ancestral lands of the Kulin people.

A place we today call Melbourne.

This experience evokes the memories of a vibrant natural, and cultural landscape. A memory that now lies beneath our urban existence today. Come and dispel some old misunderstandings for yourself and see the city with new eyes.

Please note this training requires you to meeting along the Yarra River – Please bring a packed lunch with you on the day!