Tony Abbott has announced a confusing and sketchy direct action policy on climate change centring on an unfunded multi-billion dollar "Emissions Reduction Fund". Just what this debate needs: another acronym.

Tony Abbott has announced a confusing and sketchy direct action policy on climate change centring on an unfunded multi-billion dollar “Emissions Reduction Fund” that will invite carbon reduction bids from firms and, as expected, a major drive on tree planting and biosequestration.

The fund, to be overseen by an as-yet undetailed “expert body” is intended to be a “market mechanism” for polluters such as coal-fired power generators to seek Government funding for lower-emission projects. Abbott also referred to the possibility of unspecified “penalties” if polluters undertook activities that increased their emissions beyond “business-as-usual” levels.

A priority for the Fund will be funding the abatement of 85m tones of CO2-equivalent via soil carbon projects. The Coalition has also committed to a $1000 rebate for solar panels or solar hot water systems, at up to $100m a year, and plant 20m trees by 2020 in “urban forests”, although Nationals leader Warren Truss later appeared to say that additional trees would be planted on marginal agricultural land. There will also be investment in algal energy technologies.

The entire package will cost $3.2b but no detail has been provided on how it will be funded, with Abbott promising to provide details later.

It’s hard to pass judgement on the Coalition’s direct action climate package announced by Tony Abbott this afternoon, because quite how it will work is either unclear, or yet to be announced.

How will the whole package be funded? Well, that’s for later.

Who will oversee this multi-billion dollar fund? That’s for later.

How will it ensure money is well spent? Later.

How will it deliver a 5% reduction in emissions? Well, there’s nothing to indicate it will, but Tony Abbott boasted of consulting with a huge range of industry and environment groups and produced a sheaf of endorsements from them saying the plan could achieve a 5% cut. On closer examination, the endorsements turned out to be industry groups who stand to benefit directly from the fund, like soil carbon companies, coal seam gas energy companies and the National Association of Forest Industries.

Where will all these trees – 20 million of them – be planted? Well, in urban forests or marginal farming land, depending on who you asked, but there was confusing talk from Abbott of also putting electricity wires underground.

How is this a “market mechanism” when the Government will pick the projects? Abbott talked about building a bridge.

What will happen if the rest of the world agrees to higher emissions targets? Well, that’s actually a matter for Kevin Rudd, says Abbott.

In truth, the Abbott fund proposal is a great idea. We should be investing more in carbon-reduction projects, and Abbott is proposing to invest directly in some emerging technologies like algal synthesis.

But the idea that this is going to get us within cooee of a 5% reduction on our emissions with a growing economy and growing population is complete nonsense, regardless of what any self-interested industry might say. There is simply no system here for restraining or slowing our growing carbon emissions. The Coalition has proposed one of the few carbon abatement mechanisms that is even worse than the Government’s CPRS.

Ripping the guts out of Abbott’s climate change policy 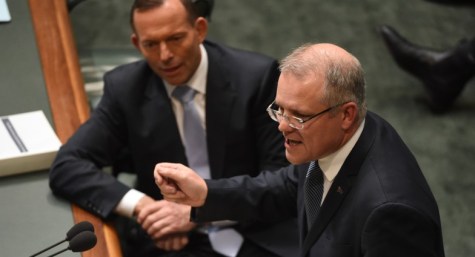 Abbott meticulous about his jockstrap, no so on climate change

I heard Tony Abbott talking today about sticking solar panels on a million roofs. So let’s say that’s 1kilowatt per home we have a “power station” distributed across the country and rated at 1000megawatts.
It’s something, but only the equivalent of say ONE coal fired unit. Neither Abbott nor the other lot get it. We need legislation that enables the financing and construction of megawatt sized solar power plants ( PV or thermal).

Indeed Bernard, not within cooee.

In fact, Bill, it’s less than 1kW. The sun doesn’t shine all the time. Abbott’s suggestion is pissing against the wind. And the tree growing scheme is a platitude too. 20 million trees won’t even make a dent in Australia’s emissions. And anyway, it’s not a real LONG TERM sink.

I think Abbott is just as much of a denier as the other dingbats in his party. This is a platitude so that he can look like he’s got a policy because most people still think “something should be done”. If he actually won government (god help us) this would be all forgotten, just like the ETS he took to the last election.

Nice to have a few more trees, but utterly trivial.

This is the equivalent to sacrificing a chicken to the Climate God.

Bob Hawke planted the first of “one billion trees” at the Murray/Darling confluence in 1989…I think the poor little bugger died (the tree, not Hawke, dammit). It’s not clear if any of the “one billion trees” every made it…In 1998, in response to a question in parliament, an MP inquired about the welfare of the missing trees. The answer was
“The One Billion Trees Program has now been subsumed within the Natural Heritage Trust’s Program—
Bushcare: The National Vegetation Initiative.”

Don’t you just love the verbiage- “The national vegetation initiative”…jesus.

Anyway, “Greening Aust” claimed to have them in the ground:

“Greening Australia has estimated that over the life of the program, approximately 1.1 billion trees and
shrubs were established by planting, direct seeding or assisted natural regeneration.”

I smell rubbery figures burning…but never mind, the point is that one billion trees might make some difference to Australia’s ravaged environment. 20 million won’t. Sadly, neither quantity will have any effect on global climate, whether you’re an AGW cult devotee or not.

It is great to see alternative policy that doesn’t revolve around a tax.

Further more, it is great to see Urban Forests and green corridors receive mention at a national level. Urban Forests have a multitude of social, environmental and economic benefits that contribute to the liveability of Australian communities. For example, they reduce cooling costs and peak energy demand, improves thermal comfort in outdoor areas, reduces heat-stress related events and in general, enhances the liveability of Australia urban environments. In addition, Urban Forests can also fix carbon dioxide form the air and store the excess in woody tissues.

Interestingly, the Food & Agricultural Organisation of the United Nations promotes Urban Forestry as a component of sustainable urban development. http://km.fao.org/urbanforestry/

Moreover, Urban Forests has been recognised at a state level (i.e. SA Million Trees Program as part of the SA Urban Forest Biodiversity program) not to mention the Housing NSW Green Street Program.