An interest rate rise seems certain, house prices are back up and ignore all stories that report that a politician said something. For this is an election year and words are cheap and normally meaningless.

An economists’ certainty. All 20 business economists surveyed by the financial news agency Bloomberg believe that the Reserve Bank is certain to raise official interest rates when it meets tomorrow. In The Australian this morning we were told “financial markets have backed off confident expectations of a rise in interest rates tomorrow following a bad stretch for stockmarkets last week.” Now is that all perfectly clear?

Meanwhile the Crikey Interest Rate Indicator at noon put the probability of a 0.25 per cent rise at 73% with a 2% chance that the increase will be 0.5%. 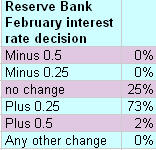 So much for the end of housing price rises. Australian Bureau of Statistics figures this morning show that the decline in house prices triggered by the global financial crisis was a short lived affair. In all eight capital cities there were substantial gains in the December quarter. Darwin and Perth are leading the median house price race with Sydney still lagging behind. When the answer is a question. Some examples from Sunday morning’s Today Show of why the refusal to give a straight answer makes interviews with Kevin Rudd the most boring thing on television. The man just keeps on ignoring questions and then asking himself his own.

Laurie Oakes: Is that how you see it?

PM: You know something, Laurie?

Oakes: What do you see as his weaknesses, though?

PM : Well, my question is not about Mr Abbott personally. I simply go to the question of policy.

Oakes: His position is that climate change science is crap he said.

PM: … But you ask what is a second area of big policy difference – health and hospitals. … So you want to know what the policy battle terrain is already

PM It is a commitment … How would we do that in a practical way?

Oakes: But don’t you agree that this is turning against you politically. I mean Tony Abbott has over turned the Turnbull stand, Mr Turnbull is now being sneered at by Liberals as having being the 21st member of you cabinet. Tony Abbott’s campaign that this will just mean a big new tax on everything does seem to be biting doesn’t it?

PM: There is a fundamental question in politics and in policy which is what do you stand for.

Oakes: But is it a big new tax on everything?

PM: … Let me just go to the absolute core of it. What is an emissions trading scheme?

PM: That’s our approach. It is very simple. What’s Mr Abbott’s alternative? … So where does all this come from? I tell you where it comes from …

LO: But isn’t the Government trying to sort of pin the Captain Catholic label firmly on Tony Abbott for political reasons?

PM: Well, let’s go to the core of this, Laurie. On various questions – and I make no comment at all about Mr Abbott’s religious views at all – I mean, I’m a person of faith, however flawed. But the question is this – Mr Abbott has a whole range of pretty extreme views.

And a refreshing difference. Perhaps the only thing more boring than listening to a Rudd interview on television is listening to him in Parliamentary question time. There too he makes an art form of avoiding any attempt to deal with points raised by his questioner unless it is a Dorothy Dixer from his own side of the House of Representatives to which he can read out a prepared answer in the most monotonous fashion.

What a contrast was provided last week in the United States when President Barack Obama met with Republican Congressmen for a televised question-and-answer session. There we actually had a fair dinkum debate between political players. You should listen in or read the transcript before torturing yourself with our question time this afternoon.

I suppose the one criticism we should make of the Obama style is that having a brilliant gift of the gab has not done much towards actually getting anything done.

These are certainly not boom times, with the ABS showing that Australian retail turnover fell 0.1% in June 2011, seasonally adjusted, following a fall of 0.6% the previous month.

Crikey Media Wrap: Joe Hockey and his "Hockeynomics" proposal calling for tighter banking regulation kicked off an almighty round of bash the banks, and now it seems everybody is joining in.

Stutchbury: Why nobody picked the rate rise

Before heaping blame on the RBA's rate rise people need to remember that Australia's economic circumstances are rapidly changing. Asian demand for our iron ore will drive a massive mining boom and the RBA is determined to keep inflation under control, writes Michael Stutchbury.