The National Enquirer misses out on a Pultizer, The Oz and the Sunday Times sprout the same climate change tale, and other media gems.

The OZ exposed climate change flaws, but the Sunday Times helped: Most Mondays for the past month or so, The Oz has been running big with whatever dirt-digging expose on the UN’s Intergovernmental Panel on Climate Change (IPCC) the UK’s Sunday Times has had that weekend.

It usually syndicates the piece verbatim, but this morning’s muck-raker, More flaws emerge in climate alarms, had one small change.

This is the third time in as many weeks that serious doubts have been raised over the IPCC’s conclusions on climate change. Two weeks ago, after reports in The Sunday Times, it was forced to retract a warning that climate change was likely to melt the Himalayan glaciers by 2035.

And from The Australian’s version:

This is the third time in as many weeks that serious doubts have been raised over the IPCC’s conclusions on climate change. Two weeks ago, after reports in London’s The Sunday Times and The Australian, the panel was forced to retract a warning that climate change was likely to melt the Himalayan glaciers by 2035.

Yep, we’re sure The Australian’s 400,000-odd readers (versus the 3 million who read the Sunday Times) had the world’s peak climate body quaking in its boots.

Feeling insipred to rise above their circumstances: Just watched National Nine News in Sydney (Fri 29/1) and stumbled upon one of the most ironic pieces of journalism you could possibly see. Lovely shot of the Chifley College Dunheved Campus school sign. Chifley is ranked the 550th (i.e. last) school on the Sydney league tables , with the motto “Learn, Discover, Insipre”. With the school council unable to spell “Inspire” what possible chance do the kids stand? — Crikey reader Michael Downes 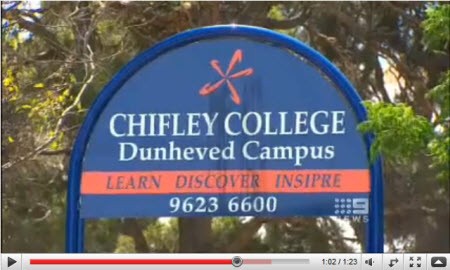 Tabloid, err, magazine, denied Shot at Pulitzer: American tabloid, The National Enquirer, has been denied a chance to take-out the prestigious journalism award; not because of its questionable muck-raking techniques, but its classification as a ‘magazine’.  The “flamboyant tabloid” hoped to contend the prize with an expose on US Politician John Edwards, which blew the lid on his affair with a campaign worker and resulting love-child.  — Newser

Brookes vs. McManus: ignored?: Myer boss Bernie Brookes and “showbiz promoter” Andrew McManus nearly came to blows at the G’Day LA promo for Australian tourism; and none of the journalists present seemed to notice.  According to Andrew Hornery for the SMH, McManus was angered by Brookes’ dissatisfaction “with the tickets he had bought for a recent Fleetwood Mac concert which McManus had been promoting”.  Hornery points out that of the several journalists, who were flown to LA and had their accommodation paid for by Myer, all seemingly missed this story. — mUmBRELLA

ISPs to Act as Copyright Cops: The Federal Court will make a decision on Thursday in a case which has Hollywood and Australian film and TV producers up against iiNet, Australia’s third-largest internet provider. Internet rights groups are fearful that the outcome of the case could force internet service providers to become like ‘copyright cops’ and limit internet access to customers who illegally download. — The Age

Fascism App Fashionable: A new iPhone app that contains the text of more than 100 of Mussolini’s speeches has proven popular in Italy.  An archive of valuable historical evidence, or something more sinister?  The Naples based creator of ‘iMussolini’ claims it is the former and not a fascist nostalgia trip. – Der Spiegal

China’s Bout with Google a Long Time Coming: According to Ian Baruma, China’s internet censorship and crackdown on Google is just another stage in a struggle against Western culture that has been raging for hundreds of years; from 17th century missionaries to 21st century internet providers. — Wall Street Journal