The mystery of The Smirk

In a news flash of epic proportions, fresh information is emerging about one of the great mysteries of Australian politics: why Peter Costello always has an arrogant smirk plastered across his face.

In a news flash of epic proportions, fresh information is emerging about one of the great mysteries of Australian politics. The mystery of The Smirk.

For years, former Treasurer Peter Costello continued to display The Smirk, even though everyone knew it made him look like an arrogant, supercilious schmuck. Some political insiders even theorised that The Smirk was a reason why Costello could never become Prime Minister.

Now one of his key former staffers, press secretary Niki Savva, has shed new light on The Smirk and why its owner was unable to wipe it from his repertoire. In her new book published this week — So Greek: Confessions of a Conservative Leftie (Scribe) — Savva reveals that Costello actually spent years trying to eradicate The Smirk through constant practice and secret surgery for his teeth-grinding. 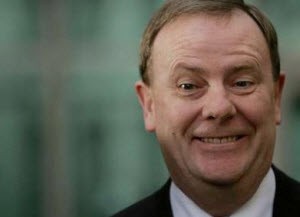 “The smirk had developed because Peter was sensitive about his teeth and tried to hide them when he smiled — not because he was always satisfied with himself. He recognised that it was a problem and that he had to stop it, but it took years of practice and a bit of dental work brought on by nocturnal tooth-grinding to straighten out that kink.”

The revelation of the truth behind The Smirk — that it was a physical rather than hubristic flaw — sheds a whole new light on Costello’s failed attempts to become Liberal leader. Political history will require a rewrite. Paul Kelly will need to write another tome. Malcolm Mackerras will have to re-chart. Peter’s off to finish the deforestation of Cambodia. He’ll have to oil some palms, which should come naturally to him.
But remember not to open the hotel room door to strangers, Pete…

“Peter’s off to finish the deforestation of Cambodia.”

Jesus… like Cambodia doesn’t have enough to contend with already.

What a discerning lot we are!!

@ Frank – whilst I am a big fan of captain smirk, your comment made me laugh out loud!