Bob Gosford found a bird that no one has ever before recorded in Australia. Unfortunately, it was dead.

This week I found a bird that no-one has ever before recorded in Australia – the Common Paradise Kingfisher Tanysiptera galatea. 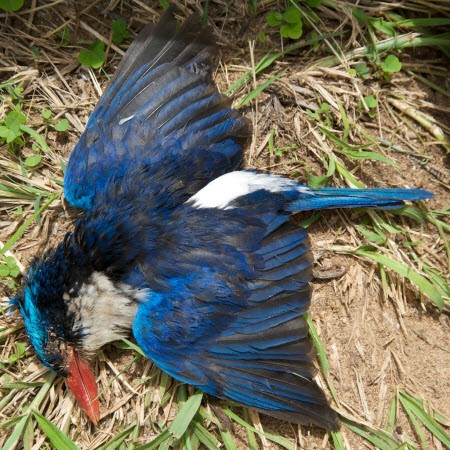 Unfortunately it was dead.

I’d like to be able to say that I was the first to see this bird on Australian soil but Saul Aniba, a new friend from Saibai island, told me that he’d seen another – also dead – not far from where I found this specimen.

I’ve spent the past week or so on two islands that are the northern-most reaches of Australian soil. Saibai and Boigu islands are a few hours flying time from Cairns – but just a few kilometres from the southern coast of New Guinea.

I travelled to Saibai and Boigu to do some final fieldwork for my book, to be published later this year, in Aboriginal and Torres Strait Islander bird knowledge and spent more than a few happy hours talking to islanders about their unique relationships with the birds that they share this most wonderful part of Australia with.

Saibai and Boigu are both “mud” islands – having been formed from thousands of years of alluvial deposits from the Mia Kusa River that drains the flatlands on the New Guinea mainland.

In may ways the inclusion of these most northerly islands as part of Australia is a polite and convenient fiction settled, as legend has it, by Joh Bjelke-Petersen’s vigorous advocacy at the time that Australia granted Papua New Guinea independence in 1975.

Also on the islands at the time I was there was a small team of fellow birders led by Dr Rohan Clarke from Monash University who are conducting long-term research into the occurrence and nature of avian flu infection in the birds that live and pass through these islands. That work involves many hours sitting in the mosquito and sand-fly infested mangroves and swamps that are the dominant habitats on these islands, catching birds, recording data and taking blood samples.

Anyway, back to Tanysiptera galatea.

Last Monday I was walking past the small group of Papuans that come across by banana-boat each day from the mainland with trade goods for sale on the islands and noticed a small shiny blue item on the ground outside the Saibai council offices. At first I thought it was a plastic bag or piece of rubbish but on closer examination I saw that it was a small Kingfisher.

Now there are a few small kingfishers that are only found in far north Queensland, the Torres Strait and the PNG mainland and I couldn’t immediately identify this one to species level.

Fortunately Rohan Clarke was walking nearby and I called him over. He immediately reacted with pleasant surprise – “This is a new bird for Australia!”.

I sat down and had a chat with Rohan later that day and he was able to tell me a bit more about Tanysiptera galatea:

Crikey: So this is a bird that has not been recorded in Australia before?

Rohan Clarke: Well, yes and no – it is a little bit tricky. There has been one other report and I think it is from Darnley island [adjacent to Boigu & Saibai] but the record was a sight record and it was never accepted.

And so there has been a bird that is superficially similar, possibly the same species, seen before, but never confirmed. Whereas we have a dead one, and we’ve had a [close] look at the tail and there are two little pins growing through.

They are the tail streamers and they are white, which…we haven’t as yet looked in any field guides yet but we are pretty confident that that makes it a Common Paradise Kingfisher.

Crikey: And that will be the first…

Rohan Clarke: That will be the first confirmed record for the country.

Crikey: And I found it!!

Rohan Clarke: I’m not quite sure whether I’d put that on record (laughs). My recollection is that we both spotted it at about the same time…

Crikey: No, no, no, no, NO!. My recollection is that you were about twenty-five metres away and I pointed to the ground and said “What’s that?”…(laughs)

Rohan put the bird into the freezer and will confirm its identification and verification as a new record for Australia.

And, as usual, the locals have the last laugh. Just before I left Saibai I had a yarn with Saul Aniba about this most beautiful bird. He told me that he had seen one a few months before – also dead – not far from where we found this latest specimen.

Remembering Martha, the last passenger pigeon, with hope for those we might yet save

We feel a sense of loss for the last passenger pigeon, who died alone in a cage. But will we act to save other species threatened with the same fate, asks Sean Dooley, editor of Australian Birdlife.

Bird of the Week: a Eurasian Hoopoe

Australian birders -- well some of the twitchier variety anyway -- have been all in a lather since the recorded arrival late last week of a single Eurasian Hoopoe at the Roebuck Plains Roadhouse, writes Bob Gosford.

Roadkill of the week: Coucal Pheasant

Coucal Pheasants are clumsy fliers that seem often to flutter or stagger clumsily across roadways in front of cars and trucks. Bob Gosford records the recent death of one by the Stuart Highway, NT.

Terrific stuff Bob. Sure it wasn’t breathing even a little bit? Maybe a little ‘twitch’ or 2?

Are you going to tick it?

I posted this piece off to Crikey earlier today while in Cairns.

I’m now back in Alice Springs and have just seen the following post on Birding-Aus (a birder’s web-based discussion room) that clarifies the identification of the bird – it seems Rohan’s early identification of the bird as a Common Paradise Kingfisher (which as he notes was made without the benefit of a relevant field guide or other reference material) was incorrect, and that it is a Lesser Paradise Kingfisher.

“Hi All,
Just back from some avian pathogen screening in Torres Strait. Lots of good birds but the best record was that of an adult Lesser Paradise Kingfisher (also known as Aru P. Kingfisher, Tanysiptera hydrocharis) found dead in the township on Saibai Island on the 25th January.

This is a new bird for Australia. Some pics of the specimen can be found here.

The bird was found by Bob Gosford and myself. John Ewen, Laura Sisson and Adrian Boyle were also present. Given it’s location in the street, it most probably hit powerlines.

The specimen is now in transit to a museum. The most obvious feature that makes it a Lesser Paradise Kingfisher and not a Common Paradise Kingfisher is that with the exception of the tail streamer (a recently erupted white-tipped pin), the entire tail is blue.

The species is reported to be common in the Trans-Fly region of Southern PNG. Feedback and comments welcome.

I am about to head back into the field again so will post a more detailed trip report with pics of other bird species that were recorded in TS when I return next week.

I run a little school in an Aboriginal Community out on Rockhampton Downs Station. We have either those birds or ones almost identical out on the Barkly Tableland. The Indigenous call them rain maker birds (their name is Loomba). They live in burrows in the grass and we see them around the house from late November onwards. When they come it means the rain is comming.

I’d be pleasantly surprised if you have this species at Rocky Downs in the Barkly – but what you most likely have are Red-backed Kingfishers – judging by your tunnel-nesting observations and other clues.

Another clue is the name you give them of “Loomba” – this is very close to the Warlpiri name from the western side of the Stuart Hwy of “Luurn”and further west at Balgo of “Luurn”.

Another indicator is the colour of the bill- most mainland Australian kingfishers have black or partially bone-coloured bills, the exception being the Yellow-billed and Buff-breasted Paradise Kingfishers, both from FNQ, and which have Yellow and Red bills respectively.

My old honours supervisor (I never completed) for study and banding of white browed scrub wrens (!) in Canberra Botanical Gardens – widest distribution of sedentary bird in Australia – used to say you can never really understand a critter …. until you’ve eaten it!

Ha ha. My favourite bird would have to be Azure Kingfisher. Never knew there was such a variety.