Age shall not weary them: this is the face of climate denialism

If your average climate denialist stopped and thought about what they have to win and lose from climate change action, they might reconsider their hostility.

These are, courtesy of the Sunshine Coast Daily, the four Noosa gentlemen who organised to bring Christopher “Nobel Laureate” Monckton to Australia. 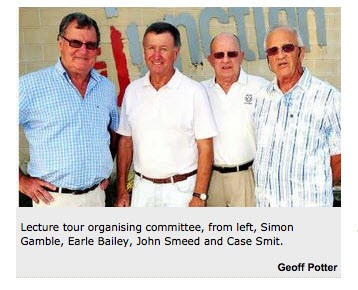 His Lordship wanted $100,000 to travel all the way here (with “Lady Monckton”) and so they got some assistance from mining heiress Gina Rinehart  The Sunshine Coast Daily is also helping by providing details of where people can make a donation to pay for “Lord and Lady Monckton”.

Kudos to them all for bringing Monckton, who seems to believe in every conspiracy theory going, to Australia, so that we can see first hand how barking mad he is – so much so that even Barnaby Joyce is avoiding him.

Note the demographic represented above, though: old, white and male.

The Noosa gentlemen are the perfect face of climate denialism. Demographic data on climate denialism from pollsters shows it is stronger among conservative voters than Labor voters, strong amongst older people and weak amongst young people, and stronger in men than women.

The demographic was best reflected in an amusing moment in 4 Corners’ piece last year on Joyce and Nick Minchin, when palaeontologist Bob Carter, giving a lecture on climate change (like most denialists, Carter’s credentials are unrelated to climate science), asked his audience to raise their hands if they were under 50, and hardly anyone stirred.

Some, undoubtedly, have genuine doubts, or have actually read enough about the issue to understand climate science is extraordinarily complex and that credible scientists can differ on significant issues.  But we’re talking here about outright denialists, those for whom no amount of evidence will ever convince that climate change is real, and, like Monckton, tend to think it’s a big plot to… well, do something. Take over the world. Tax them. Something.

This is the reason why climate denialism dominates the Liberal Party base – the Liberal Party membership is a similar demographic – and gets such a strong run on talkback radio, a medium mostly given over to retirees who like to ring radio stations (many spruikers of denialism on radio, like Alan Jones, are elderly themselves). It is also why they can constantly bombard climate scientists with the factoids, dodgy graphs, conspiracy theories and meaningless points about IPCC process culled from blogs and denialist websites – because they don’t have day jobs.

Andy Pitman, about whom I wrote yesterday, has referred to climate denialists (he more charitably uses the word “sceptic”, which suggests some of them have genuinely open minds) as “well-funded, well-organised”.  Certainly the denialist thinktanks in Australia and overseas benefit from the largesse of resource companies (much as “Lord and Lady Monckton” are doing).

But I’d suggest that Pitman’s off-beam on your average denialist, who is likely to be a retiree (and probably a self-funded retiree) who can spend all day trawling the internet for purported climate science “gotchas”.

This is not to suggest an automatic connection between age and denialism. Some of the most determined and energetic climate change activists I’ve met are retired and elderly Australians determined to put their spare time to use combating a problem that deeply, deeply concerns them.  With their investment of time, money and effort, they make most of us look like dilettantes on the issue.

But let’s not pretend the age issue doesn’t matter. It is young people, and our kids and their kids, who will bear most of the massive economic cost of climate change, who will be here long after Messrs Gamble, Bailey, Smeed and Smit – may you long and healthy lives, gentlemen – have gone, which will hit Australia harder and earlier than any other major economy. It is they who will have to pay the cost of adaptation, a cover-all term that encompasses abandoned farms, job losses, greater mortality from heat and bushfires, higher food prices and lower economic growth.  Those costs can’t be wished away no matter how hard the denialists try.  They’ll have to be paid.

Denialism is best summed up by Anna Rose, the splendid young Australian climate change activist and co-head of the Australian Youth Climate Coalition, receiving graphic death threats from denialists while she was attending Copenhagen. (Crikey is not suggesting anyone mentioned in this story would have anything to do with any kind of violence.)

But climate denialism is in effect economic war on our young people.

The worst part is – well, the worst part is that at the moment denialists are winning – but the other worst part is that not merely will your average climate denialist not live to see the worst impacts of climate change, they won’t even pay the costs of combating it. Under the Government’s CPRS, which is the nearest Australia has come to doing anything substantive about its carbon emissions, big polluters wouldn’t have started to pay more than a tiny fraction of the costs of their emissions until the mid-2020s.  Not that people on fixed incomes – mainly retirees – wouldn’t have been more than fully-compensated from the get-go.

It’s thus hard to see what drives denialists, other than sheer bloody-mindedness and a contrarianism that ignores reason and fact in favour of confection and conspiracy theory.

Denialists have nothing to lose from taking action on climate change, but their children and grandchildren have so much to gain.

Even more old pyjamas. The ETS is dead, can we get on with fixing pollution issues?

Thanks Bernard, good article. Can I just own up to being part of the massive conspiracy to do, um, whatever it is the denialists say we’re up to.

To be fair, as well as being the face of climate denialism, the old white male demographic represented by the Fantastic Four above is also the one most likely to be able to pay for extended jaunts halfway around the world and keep their Lord and Ladyships in the manner to which they are accustomed.

Now we need a piece on how the ETS is supported by young, white, conservative, male voters. As for Anna Rose, why not ask Simon Sheikh about how effective she is as leader of the AYCC?

The climate debate is far more sophisticated than “old vs young”. It encapsulates all demographics with many varying nuanced views. No wonder any of the punters have any clues about what needs to be done.

“It’s thus hard to see what drives denialists, other than sheer bloody-mindedness and a contrarianism that ignores reason and fact in favour of confection and conspiracy theory.”

As a Fifty-something, or late “boomer”, I am becoming more and more convinced that the reason for my cohort’s intransigence is the same as that behind most other forms of “denial”, unadorned (and unacknowledgeable) guilt. Those of my generation fortunate enough not to be born disabled, destitute or in the Third World have spent the last fifty years living so high on the hog we are instinctively hyper-sensitive to anything that might suggest we are over-exploiting the planet or future generations. Despite 35 years of authors, thinkers, scientists, statisticians and “revolutionaries” (as well as that much maligned sect the hippies), pointing out precisely that conclusion again and again. In fact we have been so steadfast in our denial of our excesses, and their damaging consequences, we have increased our rate of pillage enormously – all to “prove” our consciences are wrong.