The state of the union

A bad day for the navy, George Brandis and Julie Bishop do Tony Abbott no favour by jumping into the virginity debate and the Crikey Oscar contest starts to heat up.

A bad day for the Navy. It is becoming clearer why the Labor spin doctors worked so hard back in April last year to prevent details being released of what happened when the fishing boat loaded with Afghani refugees caught fire. Evidence given to the coronial inquest in Darwin suggests that the Navy hardly covered itself with glory. As one who wrote at the time that Malcolm Turnbull was wrong to suggest the Government was engaging in a cover-up by its silence and I can but apologise to the former Opposition Leader. Clearly he was quite right.

The state of the union. The vast majority of Democrat voters in the United States have so far stuck loyally to their man but Barack Obama is now presiding over a much divided nation. The Gallup organisation, in an analysis of its polling over the last year, has found the 65 percentage-point gap between Democrats’ (88%) and Republicans’ (23%) average job approval ratings is easily the largest for any president in his first year in office, greatly exceeding the prior high of 52 points for Bill Clinton. 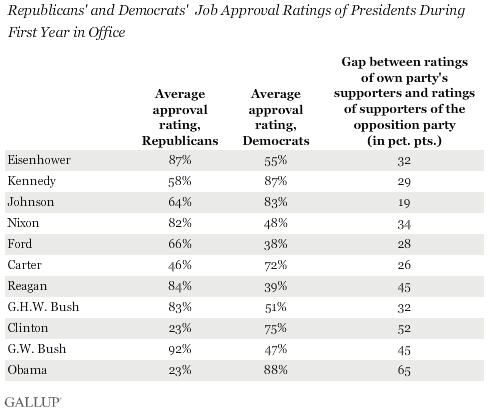 Gallup reports that overall Overall, Obama averaged 57% job approval among all Americans from his inauguration to the end of his first full year on Jan. 19. He came into office seeking to unite the country, and his initial approval ratings ranked among the best for post-World War II presidents, including an average of 41% approval from Republicans in his first week in office. But he quickly lost most of his Republican support, with his approval rating among Republicans dropping below 30% in mid-February and below 20% in August. Throughout the year, his approval rating among Democrats exceeded 80%, and it showed little decline even as his overall approval rating fell from the mid-60s to roughly 50%.

Now it seems that even that loyal support from Democrats may be about to wane. The liberal commentators I read are beginning to express disappointment at the performance of their man whose overall approval rating has slipped below 50% No gain from loyally defending the leader. Queensland Liberal Senator George Brandis yesterday and deputy Opposition Leader Julie Bishop have done Tony Abbott no favours by buying into the debate about the importance of virginity for modern youth. Both were trying to come to the aid of their Leader whose comments in an interview with the Australian Women’s Weekly have had the egg beater taken to them by journalists and Labor politicians.

This is an issue of no lasting importance provided the Opposition allows it to peter out as the silly political season comes to an end with the return of the kids to school. Keeping on responding to Labor gibes, no matter how unfair they might actually be, simply reinforces the idea, in the minds of young women, that Tony Abbott is not a politician on their wave length.

The race gets more interesting. The failure of Avatar to get the gongs at the two guild award presentations in Hollywood in recent days has made the contest for the Best Picture Oscar a much more interesting affair. Avatar is still favoured on the Crikey Oscar Indicator as a 49% probability of winning but The Hurt Locker has now improved to be given a 27% chance with Up in the Air on 9% and Inglourious Basterds at 5%. As someone who hates sci-fi films, even if they have a political message, I’m punting on The Hurt Locker.

Sorry Telstra, individual excellence, noble though it may be, does not help us all

I just want to claim this re Avatar: The SMH film reviewer had a piece mid January and I commented there that the upside down mountains were like from China’s landscape of similar mountains. (I saw on a slide show at the Australian Climbing Festival in Katoomba 3 years back).

And now there is a little postage stamp story in the SDT about China naming a mountain after the movie because it was the inspiration in the movie. (Not to mention highest grossing movie ever, and China banning the movie now?).