Get ready for the battle of Abbott vs. Gillard

Julia Gillard's fingers are crossed that the 2010 Federal Election is going to be fought on social issues rather than economy or the environment? Tony Abbott certainly won't back away from an ideological fight.

So perhaps the 2010 Election is going to be fought on social issues rather than economy or the environment? That certainly seems to be Julia Gillard’s preference, and Tony Abbott’s whole political persona is based on not backing away from an ideological fight. Most pundits would expect the hip pocket and that little climate change thingy to be nearer the fore when it comes to the pointy end of the electoral cycle, but we shall see…

Wayne Swan clearly extremely well rested, back into the fray and ready for another year of warning us about terrible things that need to be done for our own good, while at the same time avoiding making any actual tough decisions. Speak loudly and carry a limp lettuce leaf…

Joe Hockey also back on deck for what surely will be the most critical year of his political career, will he be effective from Opposition in a campaign year? You would guess many of his colleagues will be watching very closely. 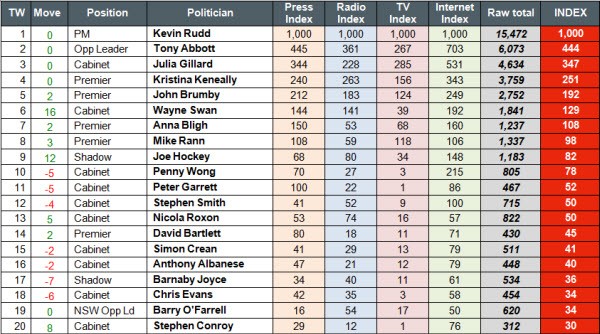 Near parity at the top, this will be an interesting battle on talkback, and will the PM repeat his FM only tactic of three years ago or be up for the fray?

At last some real celebrity, stand by for Brad and Angie to swoop down on the huddled masses of Port-au-Prince to bring them joy and prove their togethernessness. Of the 2,000 odd items, 1,500 were television.