What’s the place coming to when something as intrinsically Australian as the Southern Cross is linked to something as abhorrent as redneck racists and Swastikas? asks Crikey sub Michael Vaughan.

Under the Southern Cross I Stand
A sprig of wattle in my hand,
A native of my native land,
Australia you little beauty.

I had a disturbing chat on the eve of Australia Day — with First Dog on the Moon — so the disturbing bit wasn’t entirely beyond the norm.

Dog suggested that I had broken the mould by a) having a tattoo of the Southern Cross on my arm, and b) by being a half-decent, non-racist bloke.

But Jesus wept. What’s the place coming to when something as intrinsically Australian as the Southern Cross is linked to something as abhorrent as redneck racists and Swastikas?

Have a look at and the entry from Corro and you’ll get the drift.

I used to think of the Southern Cross as very Australian and to me it had the associated connotations of what it meant to be Australian. Now it seems to be the complete opposite. I hate what the Southern Cross stands for now. It’s the compulsory tattoo for every racist, redneck f-ck that hides behind this symbol that used to be quintessentially Australian.

My pride in the Australian flag is nearly completely gone and the Southern Cross is now one of my most hated symbols. If I see a person with the Southern Cross as a tattoo or a car sticker etc. I immediately judge them as being tools and as it turns out 99% of the time I happen to be right.

Then go to and check out filmmaker Warwick Thornton’s welcome plea for some sanity.

Thornton called on us to consider what the flag means, considering the Southern Cross constellation had for 40,000 years been a beacon to guide Aboriginals across the country.

We don’t want to turn the Southern Cross into a Swastika, that’s bloody important.

I can fly the flag a bit, having spent most of last year wandering the deserts, bush and rainforests of Oz, as a grey nomad.

I’m eminently qualified on the grey bit … I make KRudd look like a blackhead. Read into that what you will … as a pointer to his hair, which I reckon is darker than mine, or perhaps it’s simply a reference to him being a pimple on the arse of Australian politics.

I ended the tour flying three flags: The Aussie, the Aboriginal (One Mob) and the Eureka. My Aussie flag was just one of thousands I saw along the way. The Aboriginal flag got me the thumbs up from indigenous people in  places as disparate as Coober Pedy to Tennant Creek to Karumba to Tamworth and beyond, and as for the Eureka, that’s essentially a message from Nimbin, which is another story.

It was in North Queensland that I became indelibly inked with the Southern Cross after a chat with a French backpacker, Vincent, who I’d met several times in various parts of the country. He told me he wanted to take something really Australian back to his home country and wanted a Southern Cross tattoo. Yeah, believe it or not, national pride in Australia from a French national. If he was doing it, so was I.

We were pointed in the direction of the tattooist by a true North Queensland feral (read Deliverance with a Southern Cross tatt), who, the tattooist told us, vented his aggression at home by drinking beer and rum and shooting from his verandah at empty bottles in his garden.

For the first time, the tatt didn’t hurt (yeah, I’ve got a few), and sitting having a beer later in the day I felt proud to be wearing my heart where my sleeve once had been. 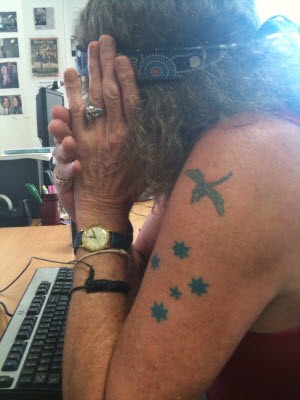 If the majority allow a extreme minority to steal the image of the Southern Cross, it is our fault. We should not actively leave it to them. The KKK love the American Flag, the British Skinheads sport the Union Jack. So what! They do it without integrity or understanding. Surely we can be a bit deeper than your entry from Corro who has now prejudged anybody with a Southern Cross as a ‘tool’. I am not a tatt person, but I am (almost) minded to get one after reading this beat up.

Yeah, but how do you tattoo fur?

I like this article, but on the whole issue one absurdity keeps distracting me;

Everyone in the Southern Hemisphere can see the Southern Cross. It’s been used by people from all over to navigate for a very long time. It is on the Brazilian and NZ flags. It is not quintessentially Australian.

@paul: If more ‘thinking types’ got southern cross tattoos, it would tend to skew the data away from the racist rednecks.

They are just stars. Why do we have to appropriate this sort of crap and call it “Strayan” anyway.

Straya is just a bit of dirt with people living on it and buggering it all up.