Usually there is nothing more interesting crashing a politician's event than a greenie in a koala suit. Except, when it's your fame hungry ex-lover. Plus, pollies avoiding shopping centres and hip-hop meets the holocaust.

What inflationary pressures? The markets moved again this morning in the belief that the newly released December consumer price figures from the Australian Bureau of Statistics make another rise in official interest rates more likely. Just why that was the reaction is unclear to me because the figures themselves provide no evidence that inflationary pressures are rising. On the contrary, all the measures that the Reserve Bank looks at are pointing downwards. 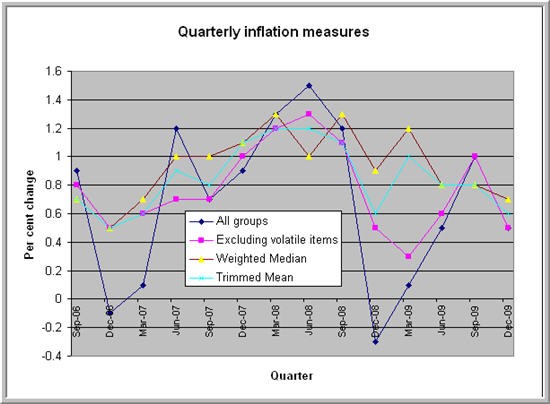 No matter by which measure, inflation has been going down.

More interesting than a Wilderness Society koala. Every election brings out the publicity seekers endeavouring to gate-crash a politician’s event. It just goes with the campaigning territory and they are normally nothing more than keen young greenies from the Wilderness Society dressed in koala suits. Over in South Australia, though, the Labor Party’s state election campaign looks like having to deal with something potentially far more entertaining for the masses. Entertaining for the masses maybe, but not for Premier Mike Rann. The thought of meeting up with his old friend Michelle Chantelois on the campaign trail is clearly not a happy one. Yesterday he thought it necessary to cancel his scheduled appearance to open the annual Australia Day Show at Greenhill Galleries, which he does each year, because Chantelois was in attendance.

Chantelois’ husband is facing charges of assaulting Rann by hitting him with a rolled-up magazine although Rann claims he had nothing more than a “flirty” relationship with the former Parliament House waitress.

The Premier’s itinerary between now and the March election in future will surely be a closely guarded secret and confined to venues where upstaging is difficult.

Respecting shopping centre owners. At least Premier Rann will be able to say he is not avoiding shopping centres because he is concerned about a confrontation with Chantelois or anyone else but merely respecting the wishes of centre owners who have grown tired of providing politicians with a backdrop before which they can show their popularity and people skills.

The Melbourne Herald Sun reported this morning that some owners plan to ban politicians campaigning in their shopping centres because their hunt for votes causes too much disruption. “Politicians don’t understand that shopping centres don’t exist for their benefit,” said Milton Cockburn, the executive director of the Shopping Centre Council of Australia.

Being savvy businessmen some owners are prepared to allow their customers to put up with a little political discomfort if there is a dollar involved. Former Labor Party federal secretary Gary Gray, now a Perth MP, told the paper he was charged $460 to set up his card table at one centre during the last election. Maybe this year he should just set up on the footpath outside and save himself the fee.

Certainly Rann should not be the only party leader to avoid meeting and greeting in shopping centres this election year whatever the owners’ say. The practice has become increasingly dangerous as a bored media strive to find every little incident that reflects badly on a campaign and the demonstrators cotton on to the knowledge that they can easily provide just those incidents.

Following in the Bush footsteps. George W. Bush, as US President, was a big advocate of abstinence as the best form of preventing unwanted teenage pregnancies, so Tony Abbott is certainly not politically alone in putting an emphasis on the virtues of preserving virginity. What will not become clear in Australia for a few years yet is whether the Abbott influence will have the same consequences as some are  now arguing Bush’s has had in the United States.

A just-released report from the Guttmacher Institute, a non-profit group that studies reproductive and sexual health, shows the teen pregnancy rate in the US rose 3% in 2006, the first increase in more than a decade. Preliminary data on births for 2007 showa further increase in the birthrate among all women, including teenagers and those aged 20–24. While conceding that it is too soon to tell whether the reversal is simply a short-term fluctuation, a more lasting stabilisation or the beginning of a longer-term increase, the report notes that other research points to “the growth of abstinence-only sex education programs at the expense of comprehensive programs”.

Guttmacher’s Lawrence Finer told USA Today that “the focus on abstinence and the shifts in pregnancy occurred about the same time”.

Hip-hop meets the holocaust. And now some music for political junkies. Esther Bejarano, one of the last surviving members of the Auschwitz Girls’ Orchestra which was forced to play as trains full of Jews and Roma pulled into the camp, has joined with the Cologne-based rappers from Microphone Mafia to make an enchanting album with a documentary film to follow.

It is all rather musically different to what this remarkable 85-year-old woman is used to. But as she told Der Spiegel: “But I know this hip-hop stuff is popular among the youth. I thought if we worked together, then young people could learn more about what happened back then.” 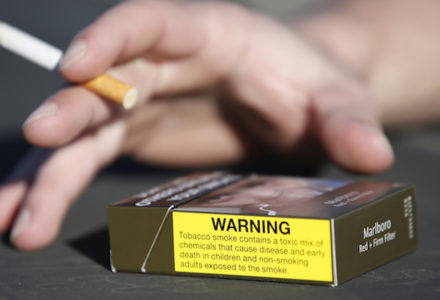 It was most ungentlemanly behaviour for the Gallery owner to have thrown Ms Chantelois out of the Gallery. She did nothing wrong and is not involved in any litigation. It was not her fault that Premier Rann isn’t prepared to be in the same room. One can only wonder why Premier Rann is so shy. His attempt to keep the matter out of the public eye appears to be backfiring. For an innocent man he is acting rather oddly. His MPs will not be thanking him for making their life difficult.

Re Hip Hop meets the holcaust: Thanks for showing this, I had a hear into it and found that the german Hip Hop movement is quite different to the american one, as it takes on general society problems and describes them in song. This one is extremely anti war, made even more impressive by the ‘involvement of the old lady’ (should be german “Mitarbeit der Alten Dame” which is much more respectfull). I also remember the melody but can’t really tell what it is, will have to look into that a bit more.