The Financial Review's "$1,000,000" subscription promotion looks like a cracker. But read a little closer and it seems the chances of getting your mitts on the moolah are very slim indeed.

The Australian Financial Review‘s attempts to prop up its disastrous adventure into premium online content continues to amaze with a promotion on page 14 of today’s edition screaming about the chance to “win $1,000,000”. But read a little closer and it seems the prospects of getting your mitts on the moulah are very slim indeed.

The promotion applies to existing, renewing or new subscribers that take out a 12-month prepaid or direct-debit subscription to the Fin for the princely sum of $780 for the hard copy edition, $528 for afr.com (but not the hard copy) and a gargantuan $1308 for both (no discount).

The catch? Instead of picking a new subscriber at random to win the $1 million, the “winner” is corralled into a “secure room” containing 100 Deal or No Deal-style envelopes (instead of briefcases), one of which contains the cheque for a million. The other 99 contain a substantially less valuable trip for two to the “calming waters of the Maldives”. The odds of securing the cold hard cash? Very low indeed.

Fairfax insiders told Crikey this morning that afr.com currently has about 7000 subscribers and 35,000 for the physical paper. Assuming the promotion nets the paper an extra 1000 payers — a good result for an offer such as this one — the odds of winning the $1 million are in fact 1000 multiplied by 100 — a massive 1:100,000.

But there’s another finicky detail. The Fin is promising an extra four entries for subscribers who take out the afr.com and hard-copy package deal, increasing your chances fourfold, you would think. As as Swinburne University statistics guru Stephen Clarke explained, an extra four entries does nothing of the sort. For example, if every one of the 1000 extra subs took up the joint offer the chances of entering the secret chamber aren’t 5 in 1000, but 5 in 5000 (or 1 in 1000). In essence, if you were trying to game the system you’d be hoping that as few other subscribers take up the joint offer — your chances plummet as more punters pile on. 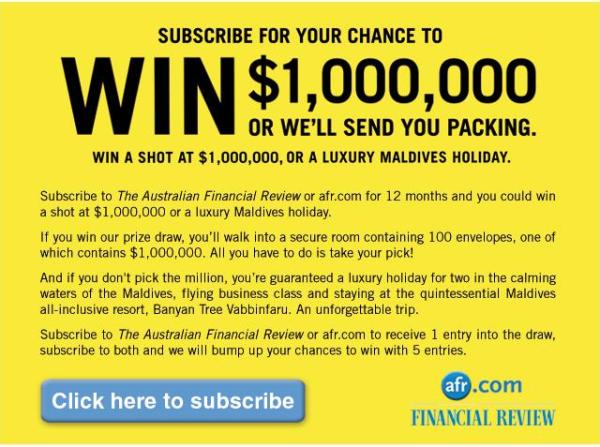 Clarke said that assuming the entrant attaches no value to reading the Fin‘s news, the competition is only “worth” $10, assuming an average subscription cost of $1000, or to put it another way, a 1% discount off the massive yearly impost.

Still, compared to Tattslotto and Powerball, the odds of emerging triumphant are reasonably good. In Tattslotto, the chances of walking away with a first division prize is one in 8.25 million, while Powerball is about in 1 in 55 million. In the case of Tattslotto, if your purchase a ticket one hour before the draw you are more likely to die in that hour than secure the cash.

And although we were unable to confirm this, sources have suggested that Fairfax may well have insured itself for the 1% chance the $1 million will be paid out. Another dubious promotion cited by Clarke was US fast food giant Taco Bell’s 2001 ploy to cash in on the break-up of the Mir space station. The restaurant erected a target in the Pacific, promising a taco for every American if the space junk hit. The cost of insurance in that instance? About $1.

Interestingly, in the promotion’s terms and conditions, the total prize pool value is listed as “$1,001,500”, which doesn’t appear to take into consideration the $30,000 Maldives trip, which the paper has presumably secured on contra.

It’s ok, I always buy my lotto two hours before the draw.