The Pope decrees that Catholic priests should blog, Facebook is pressured to switch off hate sites and other tidbits from the mediascape.

Identity crisis rocks Victorian College of the Arts. Students of the Victorian College of the Arts were dismayed last Friday to learn that Melbourne University had removed the sign and logo from the front of their college. Concerned that the sign would be replaced by a generic Melbourne University sign in contravention of an agreement the university has with VCA students, the 13,000 strong Save VCA Facebook group mobilised against the move. 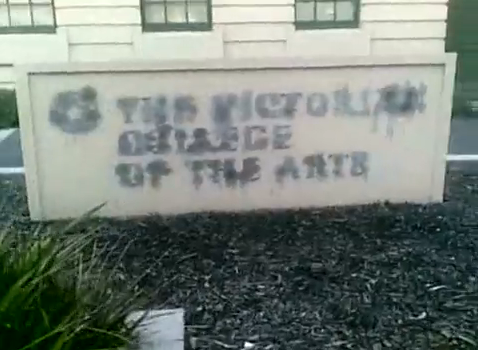 The following day tradespeople returned and told concerned students that the sign, which had been chipped out of the cement the day before, was to be replaced with an identical sign.

When Crikey asked the University why the sign had been removed a spokeswoman revealed that: “the workers had to take the letters off to paint the fence.”

“It’s part of the normal maintenance cycle, you can’t paint the fence with the letters on there,” she said. We can’t help but hope maintenance of the ‘fence’ won’t become an annual event. –Flint Duxfield

Facebook urged to switch off hate sites. More than half a dozen Australian groups that are specifically anti-Indian are still active on Facebook. On top of that, there are many broadly racist groups, including F— Off – We’re Full and Speak English or Piss Off!!!, which has 54,000 members and is growing at a rate of about 2000 people a week. –Sydney Morning Herald

Papal Decree: thou shalt blog. Pope Benedict XVI has a message for priests of the Catholic Church: they must proclaim the gospel by not only having a website, but by blogging and utilizing new web communication tools. In his message, the Pope acknowledges that priests face new challenges due to cultural shifts that have brought the conversation online. Thus, priests must do more than just take the Word of the gospel to the web. –-Mashable

News sensitivity fail on Haiti. It seems news.com.au may want to review its sponsored links after a series of funeral and gravestone ads appeared today in the sponsored links above a story about the Haiti earthquake.

Read all about it: Keneally wears same dress twice. This week’s Wankley hopefuls already have tough competition with the Dailey Telegraph reporting the shocking news over the weekend that NSW Premier Kristina Keneally may have worn the same dress twice. What’s worse, the Tele reports that the second time she donned this particular outfit was during a harbourside walk with Prince William.

Sadly they missed the scoop on the outfit Kevin Rudd appeared in (above) after being nominated for Australian of the Year over the weekend by The Australian, which looks suspiciously similar to that he wore whilst enjoyed a rap with the Prince last week. Hopefully the Tele will let us know the next time any male politician wears the same suit twice. – Flint Duxfield

Journalists try to survive on a diet of Twitter and Facebook. Five journalists plan to lock themselves in a French farmhouse and try gathering news using only Facebook and Twitter. During their 5-day sojourn, the journalists will be cut off from all other links to the outside world—there will be no TVs, and other web surfing is strictly prohibited. — newser