Fixed four-year terms means that once you've decided to keep a stale government in place they will rot before your own eyes for the entire term. Plus, the cheap book prices hike and trouble in The Age advertising.

South Australia’s Auditor-General has completed separate special audit reports on (a) government advertising and (b) the economic wisdom of using PPPs as a procurement model for major projects. Sadly, neither report will see the light of day until after the March 20  state election because parliament is not sitting again this term.

Both reports will be a headache for government, but the delay means  voters will go to the ballot box blissfully unaware of the problems. As Crikey’s Bob Gosford reported earlier this week, Adelaide is a world of sporting events and festivals right up till election day.

As New South Wales voters have discovered, fixed four-year terms means that once you’ve decided to keep a stale government in place they will rot before your own eyes for the entire term. Such is the price to be paid when you “Dance with Lance”.

Which posh Melbourne hotel is red-faced this week after its parking valets crashed the same high-performance car twice in 24-hours in the hotel driveway ? The guest was less than impressed.

People are now leaving Quest Newspapers in advertising and all over. The pressure on us that stay is all too much and they are asking questions about what we know. The people leaving are higher ups and they are obviously starting something new against Quest. This place is a mess. The HR manager has now threatened us all for talking and everyone hates him. Crikey is the only place we can get it out but all of us are being told we can’t say anything to outsiders.

Irony in this Australian story. Worth looking back to an editorial in The Oz on the Centaur. The item, which sat below a spray about whaling and Japan, discussed the sinking, but managed to avoid mentioning who had sunk the hospital ship! Funny that …

Are hard questions being asked of The Age advertising department today? Page 19 of the Green Guide features a big ad — almost half a page — for TV sets. The headline reads: “Expertly rated as a top flatscreen buy by the Herald Sun.” 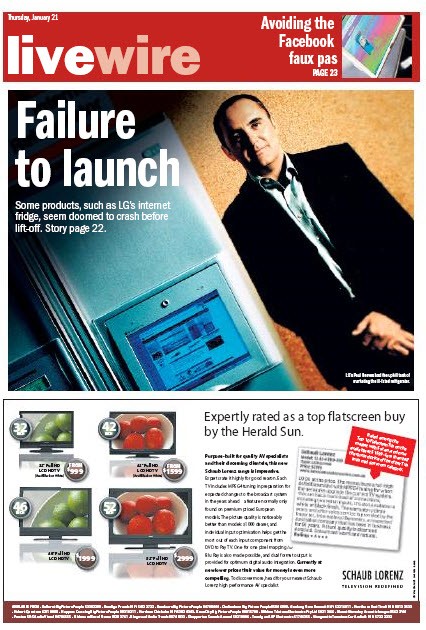 Bookdepository.co.uk, which was THE place to buy books online, just hiked its prices in the last day or so. By 100% in many cases. Looks like I’m back to retail.

News Corp Australia will stop printing a huge swathe of its newspapers. This is the full list of titles that will no longer be printed.

Tips and rumours: Labor sniggers quietly into their lattes

Why exactly is the Labor government staying quiet while Tony Abbott blabs his mouth to the media about his plans to take full control over the Murray-Darling Basin if elected?

Who is the new Queensland Union boss? Hint: he likes Akubras

Who will replace Jan McLucas in the Senate? Hint: someone with a penchant for Akubras. Also, Rudd money niceness backfires and Quest journalists' pay rates.