The shine is coming off Kevin Everywhere

If the hard slog of governing a country can take the gloss off Barack Obama within a year, Kevin Rudd has no reason to think he cannot suffer the same fate. Plus, the Copenhangen promise that last 33 days and other political snippets.

You might not like Piers but … The man is not always wrong just because you regularly disagree with him. In his Sydney Daily Telegraph column this morning Piers Akerman gives a few words of warning to Kevin Rudd that he would be wise to seriously contemplate. Among the important lessons for the Prime Minister that can be drawn from the defeat of the Democrats in the US Massachusetts Senate poll is that the cult of personality that sweeps some into office can just as speedily evaporate. Another is the danger of a government claiming that any single piece of legislation is crucial to its administration. A third, argues the Tele’s columnist, is the danger in believing that a friendly media represents a friendly electorate.

The personality cult. That Australia now has the most presidential-style of government in its history should go without saying. From producing a book for children based on his household pets, to appearing with royalty at a refuge for the homeless to resuming duties as a breakfast television commentator, Kevin Rudd is, or soon will be, everywhere.

There is rarely a good news government announcement that he does  not gatecrash, pushing the relevant minister who has done the work developing it into a supporting role as a pictorial backdrop. Community Cabinet meetings, like the one in Adelaide yesterday, are given prominence over the fair dinkum ones that previous governments used to hold where ministers occasionally even seriously debated the merits of submissions. These days, apart from the deputy Prime Minister Julia Gillard, Treasurer Wayne Swan, Finance Minister Lindsay Tanner and leader of the House Anthony Albanese, ministers are less influential than prime ministerial advisers. The big decisions are made outside the Cabinet room rather than in it.

The carefully orchestrated exposure of Kevin Rudd as the personification of this Labor government has been tolerated by his colleagues because the primary concern of most of them is their own re-election. There is no willingness to challenge autocracy, even if it means accepting a role as a political eunuch, when the opinion polls show that this primary role is being well served.

The interesting times for a leader reliant on his abilities as a vote winner to control his party come if and when the polls ever turn bad. Labor is not at that point yet but there will be some nervousness among the backbenchers and irrelevant ministry at the trend in the latest Prime Minister popularity ratings. If the hard slog of governing a country can take the gloss off Barack Obama within a year, Kevin Rudd has no reason to think he cannot suffer the same fate.

A crucial piece of legislation? So far the irritatingly dead-pan Climate Change Minister Penny Wong has maintained that the twice-defeated emissions trading legislation is in the vitally necessary category. The plans are afoot to introduce it for a third time as soon as the Parliament returns next month from its summer break. And this will be occurring at a time when my Crikey colleague Possum Comitatus, after examining recent opinion poll trends, has concluded thus: “In a political nutshell — Labor is losing the ground war on generic global warming opinion in this country.”

A Copenhagen promise that lasted 33 days. In the rushed negotiations to salvage something from December’s United Nations Climate Change Conference “the heads of state, heads of government, ministers, and other heads of the following delegations present” came up with what they called the Copenhagen Accord, which is operational immediately. Perhaps the major part of substance in that accord was this: 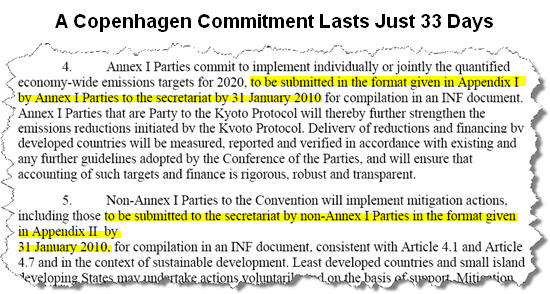 That January 31 deadline for all countries to officially state their emission reduction targets or list the actions they planned to take to counter climate change has now been dropped. So far only 20 countries (including Australia) out of 192 have signed up. Overnight, Yvo de Boer, UN climate change chief, said: “It’s a soft deadline. Countries are not being asked to sign the accord to take on legally binding targets, only to indicate their intention.”

With Democrats in the United States Senate now without the required 60 votes to stop Republican filibusters, the prospect of the US becoming a signatory to Copenhagen are not high. And without the US, the world’s major carbon emitting polluter, other countries are unlikely to be in a hurry.

Another reason, I would think, not to make emissions trading legislation Labor’s crucial piece of legislation.

The cries for further economic reform. With all the advocacy at the moment for further economic “reform” we could get the impression that Australia has become some kind of laggard when it comes to moving down the path of the free market towards what some call “economic freedom.” According to that bastion of American conservative thought, the Heritage Foundation, such an impression would be quite wrong. The foundation’s annual index of “The Link Between Economic Opportunity & Prosperity” puts Australia in third place, well in front of the United States.