An overnight stay in Adelaide is a pleasure to some: 133 riders in 18 international teams are competing in the Tour Down Under, bringing thousands of interstate and overseas spectators to the state to line the route.

But there was one man last night who very much looked like he’d rather be anywhere else but the City of Churches. Simon Crean, for 20 years a member of parliament and for two miserably unsuccessful years a leader of the Opposition, sat in a line of 17 other ministers and stifled a yawn. 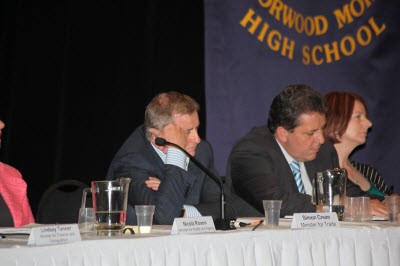 And around Adelaide, various federal ministers were with various local ministers, Labor candidates and MPs from marginal seats, beating the savannah in state and federal electorates such as Mawson, Kingston, Wakefield and Cheltenham.

Rann has an election in two short months, and Rudd will go to the polls six months or so after that. Which is why the Prime Minister has taken his “community cabinet” on the campaign trail to Adelaide, and why the federal  Crean, is so terribly bored.

At the community cabinet, not a question came Crean’s way. Trade is not an election issue, and other ministers — Jenny Macklin, Penny Wong, John Faulkner, Nicola Roxon and Rudd — know voters will decide elections on immigration, jobs, housing, and the health of the people and the River Murray.

Wong, a senator from South Australia, promised to do more to stop the Ramsar-listed Lower Lakes, already below sea level, from becoming a dusty paddock of acid sulphate soils. Rudd assured the noble 600 in the audience that a lot had been done already.

Floodwaters in the Darling River, which joins the Murray near Wentworth in NSW, are to fill Menindee Lakes east of Broken Hill before flows are released downstream.

But NSW has announced increased allocations to its irrigators, worsening fears that promises of extra water to SA are more a political gesture than a genuine remedy for the lower Murray’s plight.

The river below Blanchetown is now so salty that it’s approaching the upper limit for safe drinking, and some parts of the once-fresh lower lakes are above that limit.

So the people in Darwin where they have two seasons, wet and dry, and in Tasmania where the seasons are cold and colder, and people in the Gibson Desert where the seasons are rabbits and flies, and in every state and in every village and hamlet and where people no connection with the Murray or a $2 billion desalination plant at Port Stanvac or suicidal irrigation —  these will vote under  Abbott’s referendum.

Such a referendum will likely fail. Unless Rann and Rudd devise a practical, immediate solution, no community cabinet meeting in Adelaide will save Labor from a sea of voter anger.

Meanwhile, SA’s economy remains fragile. Unemployment is below the national average, in part because of a fall in the state’s participation rate. Youth unemployment is the county’s second-highest.

Access Economic’s latest Quarterly Economic Outlook, due for release next Wednesday, will show poor numbers in export performance — especially in wine and motor vehicles. Motor vehicle manufacturing is now at its lowest level in half a century. Australia’s last tyre maker, Bridgestone, will close its Adelaide plant weeks after the March 20 state election.

All this swirls around Simon Crean. He knows the Holden Commodore was exported to the US and that that program ceased when GM crashed into bankruptcy last year and the struggling Pontiac brand was killed off. The deal’s axing cost Holden millions of dollars in lost exports and endangered the very future of the Elizabeth plant. Production there is now well under capacity and shifts shortened or cancelled. Australian sales of large sedans have dropped for the past 15 years and exports were key part of Holden’s strategy to continue building large cars here.

And not a single question on trade. Not even a speaking part for the man who once imagined he might be Prime Minister.

Well that was nothing more then a bunch of useless information cobbled together in order to provide an opportunity to put sh-t on Crean.

Here is a tip about the lower lakes. The people now whining are the people who rooned it. And they get the frigging air time.

I think city journalists need to dig a bit deeper than their surface bigotry.

What no mention of cryin, whinein, who’s a pretty boy then, Chrissie Pynein to be back in Govt. The dear precious thing, was so angry those nasty Labor types came into his electorate and horrors held a meeting, shame. Whats a boy to do? Sitting on such a wee wee margin makes one want to stamp ones feet. Its all just to mean. Wouldn’t dare come into Chrissie’s home town if hero Johnny was still the head prefect, he’d show em. Now the boy has a headache, mean ole Mr Rudd shoo shoo go away.

Methinks Crean is burning the midnight oil on multicultural harmony issues in Melbourne, given the significant trading relationship with one huge brown skinned country to the north west.

If that means he’s working out of dateline, more strength to his arm. No one wants the poison of a racist splinter to go septic in our main southern city, or giving our international rep pleurisy.

The end of the article about Holden was the most poorly researched bit. Holden looks like it is going to be successful in exporting a police vehicle special to the USA. We also have a powerful friend in Bob Lutz, GM’s product guru. GM in the USA are looking to import high power version of the Commodore sedan and ute for the USA market. They are not looking at huge numbers by their standards but it has the potential to increase Commodore production by 30 to 50%. The Ford Falcon is probably the most endangered of the big 3 producers at the moment. It will have to tap into an existing program and become a world car with at least 80% in common with another ford platform. Not easy considering the lack of large, rear wheel drive platforms in the Ford world.