Figures just released show that 2009 was the warmest year on record for the southern hemisphere, troubles at the Canberra branch of the CFMEU and other politics tidbits. 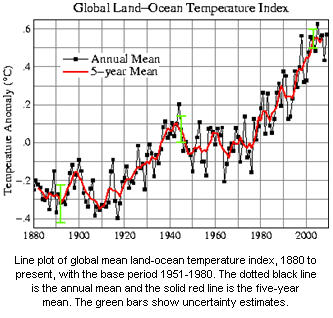 NASA mathematician Reto Ruedy commented to Science magazine before the release of the final official figures that while United States may be experiencing one of the coldest winters in decades, but things continue to heat up in the Southern Hemisphere. Ruedy said Southern Hemisphere temperatures can serve as a trailing indicator of global warming given that that part of the globe is mostly water, which warms more slowly and with less variability than land. Ruedy says 2009 temperatures in the Southern Hemisphere were 0.49°C warmer than the period between 1951 and 1980, with an error of +/- 0.05°C.

Asked if indeed 2009 was the second hottest year on record world-wide, Ruedy said yes, and then quickly clarified that, given the error bars on the temperature record (see figure), it’s really best to call it a 3-way tie with 1998 and 2007. In fact, he said, 2005 is “only marginally warmer than” the second hottest years.

This is especially impressive because we’re at “the deepest solar minimum in nearly a century.” Of 2009 being the warmest ever in the Southern Hemisphere he said:

That’s significant because the second-warmest year, 1998, saw the most severe recorded instance in the 20th century of El Niño, a cyclic warming event in the tropical Pacific. During El Niño events, heat is redistributed from deep water to the surface, which raises ocean temperatures and has widespread climatic effects. But last year was an El Niño year of medium strength, which Ruedy says might mean that the warmer temperatures also show global, long-term warming as well as the regional trend.

Exterminate Victorians. I noticed this little gem in this morning’s newspapers:

Climate for less migrants: greenhouse target fears – Australia would find it easier to meet its climate change targets if it slashed the migrant intake, a report by a top university claimed – Sydney Daily Telegraph

Those very perceptive academics from Monash University might just as easily have concluded that greenhouse gas emissions could be cut by killing all Victorians so that so we didn’t need to burn their filthy brown coal.

Troubles at the union. The Canberra Branch of the CFMEU got a few political noses out of joint last year when it persisted with attempts to buy the Territory’s money making Labor Clubs long after the Federal Executive of the Labor Party decreed that they should be kept not sold. Now Sarah Schoonwater, the Branch Secretary, has got the chop after the Union’s federal body threatened to amalgamate it with the NSW Branch if she was not dispensed with. Among the explanations is that Labor Party heavies demanded it as the price for even talking about getting rid of the special supervisory arrangements for the building industry that the CFMEU so dislikes.