Press coverage gets the royal treatment

And the very clear winner this week when it comes to media coverage is...well, the monarchy of course! Though Tony Abbott has also been successful at getting the media machine cranking.

And the very clear winner this week is…well, the monarchy of course! Prince William received just under 50% more coverage than the PM overall and over three times as many mentions on TV. Yes, three times. Nothing more to say really.

Nevertheless I will. Overall figures remain very low, clearly if 2010 is going to be a political storm with four elections on the way, then this is undoubtedly the total calm before that storm. Or perhaps the audience will remain switched off for the duration?

Tony Abbott has nevertheless started the machine cranking with his first speech getting that pesky environment thing out of the way nice and early, while still getting to say the word army. I foresee at least two thirds of a year of our PM talking about his “war on…” while the Opposition Leader responds with green armies and interest rate busting infantries. The horror. 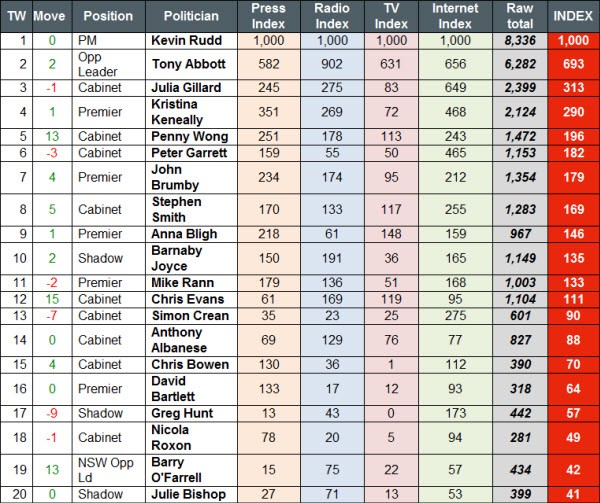 Low numbers here too, and yes, Prince William won on talkback as well, with over 320 calls (syndications included)

As Paris Hilton showed those who are famous for no good reason several years ago, doing your promotional tour to Australia in January is the probably the easiest PR hit in the world.

So Prince William is famous for no good reason? I really have to question this sort of slant. I guess the republicans (pretty much everyone at Crikey) are disappointed and scratching their heads. How could the Australian media be so stupid as to even cover this nonentity?