Sunrise II: Return of the Rudd…Willy off Women’s Weekly radar

Cheesy journalism from the NT News. This received the thumbs up from the Crikey newsroom this morning. It’s from today’s NT News and is possibly the funniest story of the year, nay the decade, so far: 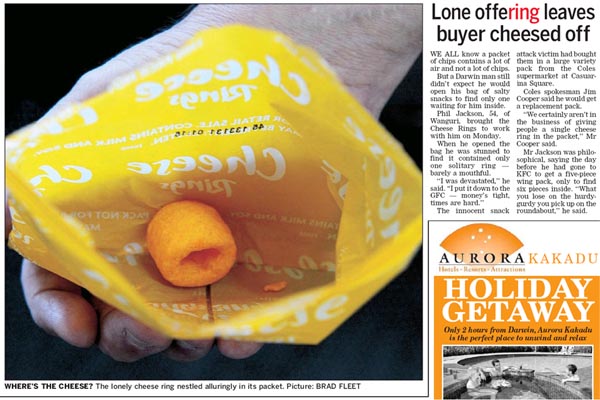 Sunrise II: Return of the Rudd. Prime Minister Kevin Rudd will appear in a weekly segment on the revamped Sunrise. Rudd was formerly a regular guest on Sunrise but ended his participation when he became Opposition Leader. A weekly television appearance will mirror what politicians, including John Howard, have been doing on talkback radio for years. — tvtonight

Willy off Women’s Weekly Radar. Prince William’s arrival in Australia has not sent a flurry of excitement through the office of The Australian Women’s Weekly. The lack of interest in William is also partly because he has a long-term girlfriend in Kate Middleton, a bald spot and… the personality of his father. So, there won’t be too many young Australian women begging for his hand in marriage. — The Australian

Who exactly lives in Melbourne? The Australian seems a little confused about how to spell residents of Australia’s second biggest city: “Co-founded by Melbournian Christopher Morris in 1978, the company listed in 1994 and has grown into the biggest global share registry player with 85 per cent of its revenue coming from overseas markets and 15 per cent in Australia.”

Is CNN reporting or becoming the news? CNN, like all the news networks, is devoting major resources to the Haiti earthquake tragedy and we’re seeing excellent reporting. But through a series of Haiti-related occurrences, questions are being raised about the murky line between journalism and becoming part of the story. — Mediaite

Firefox soars on German computers. Germans appear to be heeding the advice of their government and seeking out alternatives to Microsoft’s Internet Explorer Web browser. — Wall Street Journal

Rudd the dud…a weekly exposure will only quicken his downfall…

I notice Phil Jackson, 54, of Wanguri was quick to take back his packet containing a single cheese snack to the offending shop. But did he also whack his extra KFC chicken wing back on the counter? Hmmm.