Has the gay community really found a new friend in Mayor Robert Doyle?

The gay and lesbian community seems to have found a new friend in Melbourne mayor Robert Doyle, but not everyone thinks his change of heart is genuine or substantive, writes Luke Williams.

Melbourne Lord Mayor Robert Doyle is seen here in The Age launching the Midsumma Gay and Lesbian Cultural Festival with a drag queen and two drag kings (Melbourne City Council is, by the way, a long-term sponsor of the festival). 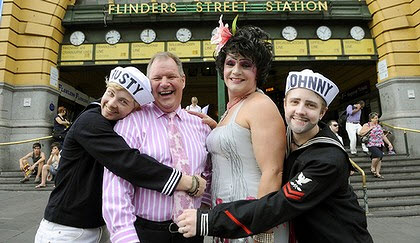 Doyle has been positioning himself as a new friend to the gay cause.  He was photographed last year holding a “Everyone Welcome. Everyone Safe.  Everyone Equal in Melbourne” for anti-homophobia day and has called on the Brumby government to extend the legally insignificant, but symbolically important relationships register for same-sex couples.

But gay lobbyists never got much joy out of Doyle when he was leader of the Victorian Liberal Party (2002-06). The pragmatic and politically insecure Opposition leader generally took the lead of the vehemently anti-gay shadow Attorney-General Robert Dean when matters such as  his relationship recognition and the removal of discrimination came his way.

“I had many negotiations with Robert Doyle on some key elements of anti-discrimination and relationship recognition legislation,” said Chris Gill, former convenor of the Victorian Gay and Lesbian Right Lobby. “Those negotiations were always tenuous … and I was frequently disappointed and surprised by his attitude to the gay and lesbian community.”

Agreeing to be photographed with a drag queen might have got him an “aw shucks” photo opportunity in The Age, but as Opposition leader he was quick to take the populist stance on transgender issues.  Take, for example, his rather nasty outburst at a transgender woman who wanted to join the Victorian Police force in 2003.

“In my view, there are some things which would discriminate against people joining the police force,” he said. “I mean, are you allowed to join the police force if you’ve been found guilty of an indictable crime? The answer is no,” he told journalists in response to questions on the issue.

He later apologised for the comparison of transsexuals to criminals, but his opposition to transgendered police officers remained.

When it came to a Bill proposing easier IVF access for single mothers and lesbians, Doyle proved he was more interested in the Christian vote.

Openly gay, expelled (and disgruntled) former Liberal MP and shadow minister Andrew Olexander told Crikey that he was astounded to see Doyle posing for the Midsumma Festival. “He told me not to be involved in anything with Midsumma and not to march in the (Midsumma) Pride March … because he was always concerned about upsetting elements within the party and the community.”

So what to make of Doyle’s new-found interest in supporting gay issues? Were his pro-gay ways simply held back by the Liberal Party all that time?  Olexander thinks not.

“The thing to understand about Doyle is that he is a creature of the media, he loves a PR stunt, he loves the quick-pick and would have jumped at the opportunity to get his photo in the paper,” Olexander said.

It’s hard not to see past the basic demographics of his new constituency has the underlying reason behind the new, gay-friendly Doyle.  His seat sits in a socially progressive urban area with one of the highest concentrations of gay and lesbian people in the country.

“The key issue here is that, whatever he feels personally, Doyle would not have made his recent statements if he was still Opposition leader. This is because there is still an assumption among politicians that you can appear more liberal when appealing to a metro constituency,” said Rodney Croome, spokesperson for the Australian Coalition for Equality.

However, Gill is not as cynical, he thinks years of lobbying efforts may have genuinely changed Doyle’s mind.

“I am surprised and delighted to see Mr Doyle as the public face of Midsumma. Mr Doyle has grown, learned and changed — he understands the diversity of the people who live in this state. It’s a sign that you never can write people off,” he said.

Many others within the gay community see their long-term adversary’s support as about as superficial, patronising and tokenistic as his decision to wear a pink shirt for the photo shoot.

Doyle told Crikey this morning: “Andrew Olexander has got absolutely no credibility, he is the only MP to be expelled from the Liberal Party in 30 years …   I never told him not to march in Midsumma Pride March, I myself have been a long supporter of the Midsumma Festival even before I was Opposition leader.”

Doyle also told Crikey that his views (on transgender and IVF) had not changed in any way.

I dont know what’s sadder?
Doyle, or the guys with him in the photo.
They all look pretty mixed up to me.
No wonder the Liberal Party in Victoria is such a basket case.
As the song goes, “when you dont know how to treat a woman, don’t know how to be a man, time to admit what you call defeat.”

Actually, the Lord Mayor’s comments about Olexander’s credibility are telling…

As Liberal Leader – Doyle opposed same sex marriage, civil unions, access to IVF for GLBTI people and equal opportunity for Transgender people in the Victoria Police… and still stands by all this. Credibility or Hypocrisy Mr Doyle???

Actually, Olexander’s credibility on these issues exists BECAUSE Doyle & Co expelled him from the Parliamentary Liberal Party when he spoke out in favor of these human rights issues – not DESPITE his expulsion. Let’s not forget that Doyle’s expulsion of Olexander was the catalyst that led to his own Leadership of the Liberals imploding just 3 months later – and the policy changes that followed!

The previous expulsions – 30 years ago, were of 2 Lib MP’s in the 1970’s who spoke out against the Hamer Government’s involvement in dubious “Land Deals”… which eventually destroyed Hamer’s Premiership – and led to Liberal defeat in 1982.

I bet the Libs wish they listened back then, too!

Convincing you of this when negotiating amendments to Victoria’s Equal Opportunity laws was “tenuous” – because you did not seem to get it.

Mr Olexander did understand – and fought hard to convince you that protection of citizens’ against discrimination should include their “sexual orientation” and their self identified “gender identity” free of the offensive and subjective “bona fide test” for Transgender individuals.

You opposed the exclusion of the “bona fide” test in the legislation Mr Doyle – and it’s still there today.

We are not criminals Mr Doyle, and we are not hypocrits either!