Melting glaciers: the canary in the mine shaft of global warming

The career-driven, social agenda-driven scaremongering frenzy of the IPCC over global warming is totally unnecessary when glaciers already tell the tale. 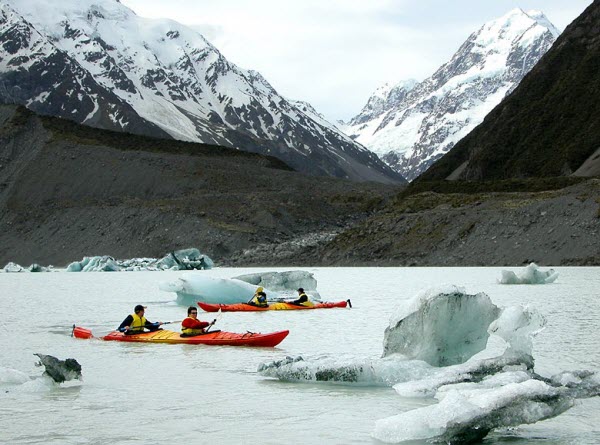 In New Zealand, the lies and counter-lies from the IPCC and global warming denialists about the world’s fast disappearing glaciers get their moment of truth.

The three longest piedmont glaciers in the southern alps, the Tasman, the Mueller and the Hooker, are disappearing at a speed unimaginable to this former alpine climber and my friends from that carefree and reckless past.

We crossed ice 400 metres thick near places where sightseeing boats now ply the vast lake that has replaced most of the lower Tasman Glacier.

Kids wearing board shorts, sunnies and face paint are windsurfing across another lake that is now replacing the lower Mueller Glacier, also close to the Mt Cook tourist village.

In the ’60s, the late bushwalker and early alpine climber Dorothy Butler took foolish youths to NZ Alpine Club skills courses so we’d be able to get out of crevasses, self-arrest and do all the other things that might stop callow Aussie kids dying like flies on their mountains,  it was … so different.

These lakes rapidly appeared out of nowhere, starting with huge crater-like sink holes in crumbling moraine covered black ice in 1978-79.

What was ice, massive, rock-hard sheets of slowing-moving ice, became vast reaches of shingle and streams and lakes. What became tussocks became the flowers of the plains, colonised each summer with specks of gentian-like blossoms. You can find seedlings that will grow into the first trees in places last covered by woods in the previous interglacial, maybe 120,000-130,000 years ago.

Why the IPCC sees a need to distort the tale that the glaciers already tell in abundance (and with immense beauty) about global warming is the question. Not just about glaciers, but about temperatures, and inferred warming that “eliminates” pesky ground station readings that show cooling, and outrageous scare tactic crap about decametre rises in sea levels within 20 years, 50 years or whatever number of years drives headlines and hysteria.

This career-driven, social agenda-driven scaremongering frenzy sticks in the throats of some of my friends in earth sciences here and abroad, and hey, back then, I climbed with a few them in NZ, in France, and America. In our lifetimes, the ice has disappeared and transformed some of those places beyond recognition.

The complaint is about the pressure to frame everything in earth sciences in terms of a catastrophic warming dogma. This involves a contempt for the research, which is difficult and complex and in places contradictory, yet also points inescapably to fossil carbon induced warming as real and serious.

Then the denialists buzz around the stink with their own lies. One of the most persistent is that most of the world’s glaciers are actually advancing. For sure. Nothing like confusing advance for “surge”, which is what happens when a heavy snow season sends a “ripple” of ice downstream, as happens on the NZ west-coast glaciers such as the Fox and Franz.

The large tributary ice streams that feed down into the Tasman, like the Hochstetter Icefall from the grand plateau halfway up Cook, or the Ranfurly that drains the Minarets, are thickening. The warmer temperatures up high actually mean more snowfall, and more glacial ice flow, but down low, on the main trunk of the Tasman, it means runaway melting, and a drastic retreat. Some of the Tasman ice feeders, such as the Ball Glacier have almost completely vanished. In the ’60s we used ropes and crampons to get from the Tasman to a scary place under the Caroline face on Mt Cook via the Ball Glacier. Now, the deeply crevassed glacier has vanished. Rivulets roar down slope there for all but a few months of the year and ravage metres of ice per day from the remaining middle Tasman ice.

These “temperate” glaciers are the canary in the mine shaft of global warming because they remained stable just above or below freezing point. Now that the main glacial tongues are above freezing from surface to bottom they are rotten with water. They will melt completely into lakes or shingle plains within decades, until the next glacial epoch comes.

The process of glacial retreat here, and everywhere non-polar glaciers persist, fits the rising concentrations of CO2 in the air from the onset of pre-industrial smelting and forest clearing in the clearest possible way.

It doesn’t need help from lies or distortions.

Take your children to New Zealand. Show them the places where the ice is being reclaimed by the flowers and trees and lakes, and pleasure boats. It is a rare moment in time to be able to witness what happened on such a huge scale at the end of the Pleistocene and the start of the Holocene, or “our time”.

May we use our time wisely, and truly.

The price we pay for the martyrdom of Peter Ridd

The Peter Ridd circus rolls on and on — and we're all footing the bill.

The 'energy expert' (who has no formal scientific qualifications) says he wants to blow 'hysteria and alarmism' away — but with fans and followers like his, that's blowin' in the wind.

Who are the 75 Australian ‘scientists and professionals’ who say there is no climate emergency?

Who is behind the latest petition attempting to throw doubt on the science of climate change — and who are the Australian signatories?

As an earth sciences practitioner myself, I dips me lid to you, Mr Sandilands. You’ve got this absolutely spot on.

A pox on both denialists and apocalypse pornographers.

Has anyone seen the actual passage in the report that is at the centre of these shenanigans? I went looking through the section on Asia: Himalayas in IPCCAR4 and could not see the claim that the Australian are referring to.

Can’t wait to read the armchair deniers hoeing into Mr Sandilands – how dare he know because he’s been there and seen it!

The IPCC have publicly acknowledged that they got their prediction of Himalayan melting wrong and said they will remove that bit in the next report. I’ve yet to hear any “skeptic” retract any claim, ever.

The original mistake seems to have stemmed from a mistype of “melting by 2350” to “melting by 2035”. Convenient mistake, perhaps, but easily made and easily corrected. Since, as you say, the research “points inescapably to fossil carbon induced warming as real and serious”, how can the IPCC’s reports which document this fact also be a “lie” or a “dogma”? Sure, Pachauri now looks stupid. Big deal. Given the level of animosity and abuse which climate scientists now face (Michael Mann had to have a Secret Service escort last time he went to Texas because of credible death threats), they’ve taken on a defensive mentality. Hardly suprising.

“inferred warming that “eliminates” pesky ground station readings that show cooling” – what on earth are you referring to? who/what are you quoting? If the glaciers are indeed melting as you say (even though the Himalayan glaciers are not melting at the rate the IPCC stated) why is sea level rising so implausible to you?

I’d better be quick and point out that the caption on the chosen photo is wrong in that it is taken on the big pond at the foot of the Mueller Glacier and not on the Hooker which is hidden up valley in the middle distance.