Barnaby Joyce publishes a sequel to Kevin Rudd's kids' book, why minor parties did so well in the latest Newspoll, and is the US Senate about to see a power shift?

Abbey and Jasper — the sequel. By Barnaby Joyce. Seriously, Barnaby published this yesterday:

Mr Rudd is releasing his children’s book today and I thoroughly commend the donation this book will make to charity but believe there needs to be more discussion in the development of the plot about what happened prior to Australia Day.

Abby – Hey Jasper what have you been up to you crazy cat?
Jasper – I have found a cheque book, so went on a great adventure, building for the future, zipping here and zipping there and hanging with lots of other cats in all sorts of interesting places.
Abby – that sounds revolutionary you crazy cat, but I do not quite get exactly what you are doing?
Jasper – Well Abby, if we have to plan for our future we have to build on what provides for us cats now. For instance where do we cats catch mice, rats, frogs and other cat food? Where do us cats hang out and get down and dirty with other cats?
Abby – Generally derelict buildings!
Jasper – Spot on Abby! So I have been building a whole new portfolio of future useless buildings, some buildings that aren’t even needed today, so our kittens will never be short of food again. I have put them in schoolyards so they can fill up with scraps of food and old mats and furniture – and mice!
Abby – You crazy cat, you really are revolutionary. Your kittens will be so fat.
Jasper – Ease up, we do not want any obesity, so we have provided other venues for kittens to roam where they will get exercise in safety.
Abby – Where?
Jasper – Roofs, Abby, Roofs! We are going to cover the ceilings with fluffy stuff so no more sore paws for this crazy cat.
Abby – You have been working hard but this sounds pretty major.
Jasper – I am a pretty major cat, Abby. You should see my plane and have a gander at my passport. I hang out with all the major talent and will fly anywhere in the world to do it and for absolutely any reason. No party is complete without me. You should pass by my alley and have a look at the photos.
Abby – But how did you pay for all this you crazy cat?
Jasper – Simple! Just borrow the money. I have borrowed more money than any other cat in the history of this alley, and I have made sure that we have stimulated the growth of the local tip with the purchase of a whole range of crazy cat consumables such as flat screens and toys and other electronics so if the school halls burn down we can head back to the tip.
Abby – You revolutionary cat! By the way what is the debt on the poor suckers account?
Jasper – About $120 billion and rising fast, but this cat is not the one paying for that. There’s no easier, more guilt free way to spend money, than by spending some other cats money on other cats!

Magnificent spinning. A great example of the political spinner’s art in the reaction of Julia Gillard to criticism by the Education Union of the way federal funds are distributed in favour of private schools at the expense of government ones. It was classic  “don’t mention the war” stuff as the Education Minister simply ignored those comments to declare: “The Rudd Government has welcomed a report released today by the Australian Education Union on school funding.This report highlights the unprecedented investment the Rudd Government is making in Australian schools.”

A possible explanation of the latest poll. Perhaps statements like that of Ms Gillard are the reason that the Greens, independents and minor parties did so well in the first Newspoll for the year. I detect among my Labor friends – some would call us the chattering class – a growing sense of disillusion with the way that this Rudd led government continually tries to avoid making any standards on what used to be the Party’s principles. When pragmatism rules so completely there is bound to be a search for a purer alternative and for the left the Greens are providing it. 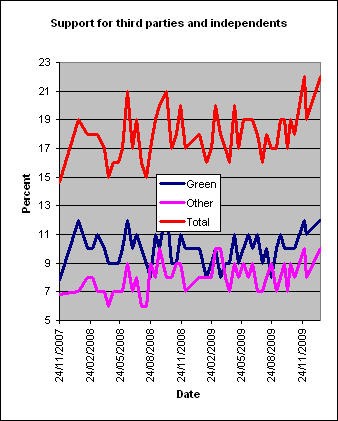 Not that I detect much joy in the numbers for the Coalition parties. Newspoll has Labor dropping three percentage points on the primary voting intention but the Liberals and Nationals gaining none of it. The voodoo science of the Himalayan glaciers. Clearly that page one story in The Australian yesterday about the dodgy evidence used by the Intergovernmental Panel on Climate Change was no beat-up. I note that the Times of India this morning has the Indian Minister for the Environment declaring the incident to be just as serious as the Oz did. Dangerous development for Rudd and Co. Prime Minister Kevin Rudd has stuck steadfastly with President Barack Obama on the climate change issue but that course is becoming more difficult as the chances rapidly reduce of the United States legislating for a “cap and trade” carbon scheme like Australia’s planned emissions trading scheme. The political trading markets now rate the chance of Congress passing Obama’s planned legislation this year as down to 25%. A Republican victory would see the Democrats lose the 60th vote needed to avoid Republicans using the filibuster to block legislation.

Plenty has happened here in Australia while you've been focusing on the chaos in the US.

Berejiklian is now the latest in a long list of politicians whose close personal relationships have made for embarrassing headlines.

That passage by Barnyard is incredible.

Love the constant use of ‘revolutionary’, like he’s really trying to push the Commy aspects…