Brumby falling on his sword over liquor laws

The controversial one-size-fits-all approach to Victoria's liquor licensing laws is again under fire after a Queen Vic Market wine shop was classified as a "high risk" venue in the same league as a 1,000-capacity South Melbourne superclub.

The controversial one-size-fits-all approach to Victoria’s liquor licensing laws is again under fire after a Queen Victoria Market wine shop was classified as a “high risk” in the same league as a 1,000-capacity South Melbourne superclub.

In a echo of the scandal that caused storied rock pub The Tote to shut its doors yesterday, Swords Wines, which specialises in refillable flip-top bottles, is regarded as dangerous because the produce markets in which it trades open before 9am. Under the new laws, “ordinary” trading hours are between 9am and 11pm.

Swords operates four outlets at markets across Melbourne and has a retail store at Clifton Hill. On a Saturday it opens at 6am at the Queen Victoria Market, alongside other shopfronts in the Dairy and Produce section.

Managing Director Brendan Beattie told Crikey he has been saddled with an extra $11,697.60 in fees this year, which were due to be paid on 1 January. Beattie applied for an exemption, but because he employs over 5 full-time staff, the request was slapped down in a tersely worded letter from controversial liquor licensing chief Sue Maclellan.

“The recent amendments to the Liquor Control Reform Act 1998 do not provide a process for an exemption from payment of fees or an alternative classification for premises such as yours,” Maclellan wrote on 7 January.

“I regret I cannot be of further assistance.”

In a previous letter, Maclellan infers that Swords’ business could propagate “alcohol related harm”, presumably wrought by early-morning revellers on their way home from nightclubs that share its “high risk” status. 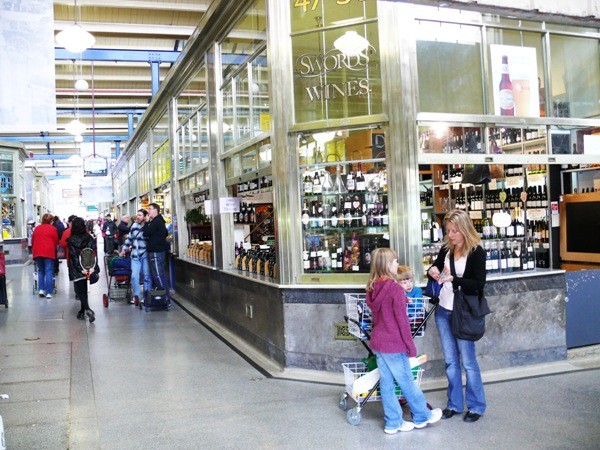 Swords Wines, which is in the same “risk” category as King Street nightclubs under the Brumby government’s liquor licensing laws

Beattie said the new fees had the potential to gut his business.

“It’s going to be huge, it’s just another overhead that’s added on and it’s not as if you can turn around and increase your prices. The last 12 to 18 months have been very tough, with the GFC and the wine glut.”

Beattie said that liquor behemoths, including many Dan Murphy’s stores, were only required to pay the base fee of $795 — $5565 less than Swords’ Victoria Market outlet.

“When I spoke to Sue Maclellan she simply said you are obliged to pay the fees this year and we’ll try and consider you next year. There was never any consultation and I don’t believe they’ve given it any thought.”

He said he has no choice but the pay the fees, which are now due on 21 January, otherwise he would be forced to shut his doors.

The controversial changes to the Liquor Licensing Act, based on a contested report by a group of external consultants, have already claimed one scalp with yesterday’s forced closure of The Tote amid a $60,000 doubling in compulsory security costs.

Victorian Shadow Consumer Affairs Spokesman Michael O’Brien told Crikey the laws, introduced into state parliament last year, were a “disaster”. “The fees have increased to $35.8 million this year and this is just an excuse for a $20 million tax grab.”

“The law can’t be risk-based if it doesn’t discriminate between a King Street nightclub and The Tote, or a mum and dad corner store and a Dan Murphy’s.”

In country Victoria, O’Brien said some small business had decided to stop trading rather than cop the massive fee increase for trading outside the normal hours on public holidays, which places them in the same category as a tranche of troubled regional nightspots.

In an emailed statement compiled by her advisers, Maclellan said Swords Wines was able to apply for a reduction in trading hours, which would see a “significant reduction in fees”. However, Swords told Crikey they were required by market management to align their opening hours with other stores on the premises.

Last night at The Tote’s swansong, high-profile bands including The Meanies and Spiderbait slammed the state government and the Liquor Licensing Commission and expressed their support for outgoing Tote licensee Bruce Milne.

On Sunday, Maclellan launched an extraordinary attack on Milne, lashing The Tote for a string of license breaches and accusing the music scene stalwart of dishonesty.

Pressure is growing on controversial Victorian Liquor Licensing director Sue Maclellan over her enforcement of the state government's liquor licensing laws following a backflip on live music by the Brumby government.

Vic government set to slash security to save live music

Security requirements for inner city Melbourne music venues are set to be slashed in an desperate government bid to save live music from the scrapheap amid spiralling liquor licensing compliance costs and a looming state election.

White knights circling to save The Tote

A trio of white knights look set to assume control of iconic Melbourne rock pub The Tote, which was scheduled to close its doors for the last time today due to a combination of liquor licensing requirements and fees.

Spose they could open at 9am and avoid the huge fee though?

The management of the market requires that Swords open at the same time as the other vendors.

This is just another example of bureaucratic incapacity which pervades the whole Victorian government under Brumby. Stupid examples like this and the Tote show how far out of touch public sector bureaucrats are with business reality.

On the other hand the big end of town Woolworths/Crown/Bruce Mathieson are well looked after probably as a consequence of political patronage, while the small fry get screwed.

If the liquor licensing authorities cannot differentiate between strip clubs and wine retailers they should be sacked. Similarly if the police are doing their job you would notneed to have paid security staff, the bulk of whom are relatively inoffensive minders standing outside the door, with limited capacity to deter real troublemakers, but adding a substantial real cost to operators.

I wonder, does it make a bureaucrat feel big when they harm innocent businesses with the mere stroke of a pen / tap of the keyboard?

I have a contrary streak so I was wondering is this a story for wine snobs? Who really gives a rats?

Alcohol is the worst drug in Australia and this is just the high end of the damage. How quickly would the rowdies colonise a section of the otherwise family friendly market and put at risk the rest of the traders? Cost of police etc?

Why don’t they open early and sell coffee or non alcoholic stuff until 9am? How much trade could possibly be lost between 6 am and 9 am for high end booze in a produce market anyway? I don’t remember seeing Coles or Woolies liquor section open at 6 am.

I worked in best regional Vic wine selection shop for 12 months in 1982 and our biggest sale item always, was … beer. Not everyone seeks out merlot or botrytus dessert wine. Do they sell beer? I bet they do.