Rumours are rife in suburban Brisbane that Fairfax or APN is about to make a move and take on Quest Newspapers in what promises to be a vicious turf war in the community newspaper market.

Rumours are rife in suburban Brisbane that Fairfax or APN is about to make a move and take on Quest Newspapers in what promises to be a vicious turf war in the community newspaper market. Real estate agents and other business owners have been given advertising proposals and the rates should blow Quest out of the water.

Copies of Quest advertising budgets (both revenues and profits) have been leaked and are doing the rounds and the money that News Ltd makes out of its suburbans is astronomical. They are the “rivers of gold” that the other big players want a piece of.

Was it deliberate or just coincidence? Channel Ten in Adelaide recently ran a story on Michelle Chantelois, the one-time parliamentary barmaid whose allegations of an affair with Premier Rann have resulted in denials, defamation actions et al.

Ten’s story featured Chantelois emerging from talks with lawyers saying she didn’t regret her tell-all interview late last year. Then as Ten went to a break, up popped a promo for Ten’s new series The Goodwife , the story of a wife and her bed-hopping husband come corrupt politician.

Perhaps it’s a sign of the deteriorating relationship between Rann and local media, recently exposed in the Australian Financial Review‘s feature on the coming election. In that piece Rann is quoted as saying several journalists have taken a set against him after being offered jobs by the Liberal Opposition. It sounded conspiratorial and a long way from Rann’s past relationship with local media where he literally wrote their leads for them. If the local pack turns on Rann, life could get tough.

As a Myer shareholder, I am somewhat dismayed at the report that they are a sponsor of G’day LA. What the?? As if Americans are going to jump of a plane (Qantas, of course) to come to Sydney or Melbourne to race into Myer and buy some Basque or Blaq, house brands that Jen Hawkins will be spruiking. Myer is splashing a huge amount of money on a questionable event and sponsorship that will deliver no return for the brand (apart from the News Ltd PR highlighted on Crikey yesterday). This will not grow sales, which are pretty dismal, nor will it positively impact the share price, which is a few cents off its all-time low.

Commonwealth Departments in Canberra are bracing themselves for an extremely tough budget this year as the Rudd Government attempts to pay back some of the debt that was accrued in 2009 due to its stimulus spending.

While it will be attempted to keep government expenditure within a rise of only 2%, huge cuts are expected, especially in areas of consultancy and research. This can be seen as an attempt by the Rudd Government to neutralise the Opposition’s argument that too much was spent last year to keep Australia out of a recession.

In much of the literature about Tony Abbott, it is reported that he “has brains and a heart” given that he was a Rhodes Scholar at Oxford and earning a masters degree there.

What is not reported is what is required of students to achieve a Masters at Oxford. Basically you pay for your Masters. There is no formal assessment and the title of Masters is awarding for attending classes and reading for the degree. Anyone serious about academic study at Oxford completes a DPhil or higher in their chosen field.

This information begs the question of Abbott ‘earning’ his Masters and therefore the commonly used justification for his ‘brains’. A call to his press secretary about the topic of his research study as part of his Masters would surely be given the answer that a research project was not required.

Following on with ANZ’s excessive fees, it appears that in October the ANZ started charging overseas transaction fees even for charges processed in Australian Dollars overseas – This is a big problem for people using websites as currently the fee for Visa and MasterCard is 3% and in some cases you have no idea whether the charge will be processed in Australia or overseas. I fail to see how this can be justified in a global banking environment.

It seems this is a problem for them as they stated in their form letter:

As a goodwill gesture, ANZ is currently reversing the Overseas Transaction Fee charged by some of these Merchants.

In these cases you will still be charged the fee; however it will be reversed at a later date (usually the following business day).

Pyrmont parks and walkways are very popular for picnics, fishing, relaxing… What a shame then that neither the Sydney council nor the Harbour Foreshore Authority want to take responsibility for emptying the bins along the water front. The council says it’s the Foreshore Authority, but despite numerous calls from numerous people to foreshore people they’ve left the bins like this for over a week. The longer they leave it the more is falling into the harbour — thus presumably making it somebody else’s problem. 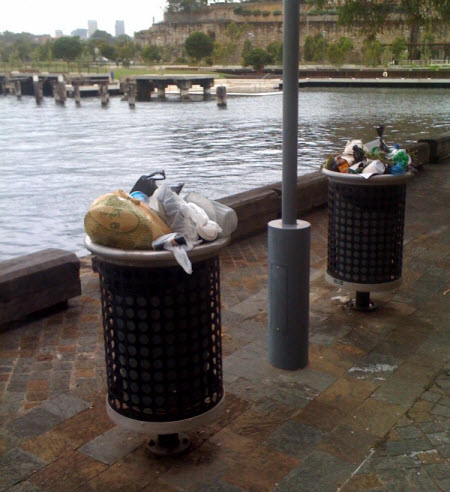 I was at the Art Gallery of South Australia on Sunday and went to the toilets off the front foyer and was appalled at the condition of them… so I took these pics… and then came the news regarding the Gallery boss, Christopher Menz, quitting over funding. Certainly changes my perspective on these cracks… I was going to blame the Gallery for not keeping things up to date. I guess that cap fits better on the state government. Sorry about the quality of the pics. They are from my iPhone: The Nationals are threatening to undermine Australia's financial stability to help their coal miner donors. But they're not the only ones embracing fossil fuels because it pays to.

Agriculture Minister David Littleproud is worried about banks acting like moral arbiters. We're here to tell him not to stress.

For 20 years the big banks ripped off Australians. Now it's goodbye and good riddance to vertical integration.