Getting down and dirty at media cafeterias … G’Day journo junkets

The Haitian earthquake takes over the internet, from Twitter hoaxes to Google Maps. Plus, a plethora of amusing typos, corrections and creepy front covers today and all the best news from the media universe.

G’Day journo junkets. Good to see the Herald Sun jumping into action this morning in response Crikey’s story yesterday that it seemed to be struggling with disclosure over its journos’ attendance at this weekend’s G’Day LA festivities in Hollywood. It seems that not only did the paper fail to disclose its own sponsorship of the event, but that Confidential editor Fiona Byrne had been personally flown to the city of broken dreams on behalf of Myer and Qantas to pen the kind of sludge that appeared yesterday. Crikey looks forward to Byrne’s enlightening reports from this weekend’s black-tie shindig in Monday’s paper. 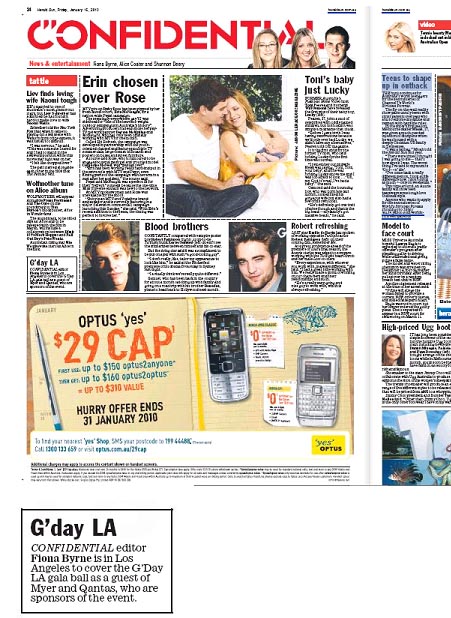 Getting down and dirty: which media org has the grossest cafeteria? Last week, The New York Times closed its cafeteria for a day as a precaution after several employees reported symptoms consistent with food poisoning … However, a sister facility at the paper’s printing plant in Queens fared substantially worse when inspectors dropped by in February 2009: It was cited for “evidence of roaches or live roaches in food and/or non-food areas”, “conditions conducive to vermin” and improperly installed or maintained plumbing, among other issues. In total, the Queens lunchroom received 18 violations points, one of the highest totals for a New York City media cafeteria

Who had the highest? Based on my quick survey, that would be Reuters, which somehow rang up a towering 40 points in its November 2009 visit from the Health Department. Most of the citations had to do with food temperature and operating conditions. MSNBC was next-filthiest, piling up 20 points. Inspectors nailed it for employing staffers with “inadequate personal hygiene” and a director of food operations who’s not certified in food safety procedures. Anyone else feeling queasy?– Daily Finance

Mythical Jesus tablet is found! Sort of … We have our first winner in the Valleywag Apple Tablet Scavenger Hunt! The most concrete proof of the messiah machine’s existence so far landed in our inbox last night. Congratulations, Michael Spillner of the prestigious Menlo Park law firm Orrick, Herrington & Sutcliffe! Your “Letter from Apple” demanding that we stop the Scavenger Hunt — specifically the line “Apple has maintained the types of information and things you are soliciting … in strict confidence” — is the most concrete evidence (from Apple itself, no less!) yet that there may indeed be a tablet in the works. — Gawker

Crowd sourcing the best Haiti news. NPR has always been ahead of the curve when it comes to using social media to do great reporting. So when we saw that they’d created a Twitter list of people tweeting from Haiti, we wanted to know: How’d you figure out those folks were legit?… NPR’s social media strategist Andy Carvin … (says) “I sent out tweets through NPR accounts and my personal account, asking: Does anyone know anyone personally who’s in Haiti right now? At the same time, I started using the Twitter search tool for very specific searches  — for words like “earthquake” and “tremor”, in French, and in Spanish in case people felt them in the Dominican Republic. I looked up names of neighborhoods in Port-au-Prince and searched for those. I ended up finding a couple of sources that way. But the majority of people who appeared on the list were people who were recommended to me by other Twitter users.” — Mediabistro

Pay the Democrats, pimp the Republicans. Would you like a job as an executive at Rupert Murdoch’s News Corp? It looks like there’s one minor hoop you have to jump through: donating thousands to Fox’s PAC … So basically a media company whose most profitable arm is a communications division of the Republican party (and a fairly successful entertainment company) also runs a legal political bribery organisation that buys off politicians from both parties, and all the liberal employees of this conservative media company have to contribute. Also almost none of this is out of the ordinary. — Gawker

Haiti Twitter news a flying hoax. Twitter was buzzing Thursday morning with news that several airlines are flying doctors and nurses to Haiti free of charge to help with relief efforts there in the wake of Tuesday’s devastating earthquake. The only problem: The rumors are false, an American Airlines spokesman says. Twitter users also circulated a rumor that UPS would ship for free any package under 50 lbs. to Haiti. In a blog post Wednesday on UPS’s website, a spokeswoman debunked the rumor and said that destruction of Haiti’s roads and communications networks “means our own shipping services to Haiti are on hold.” — CNN

Google Maps has a higher Haiti purpose. The quake in Haiti will of course prompt a humanitarian response, and accurate aerial imagery will help get it to where it needs to be most. Helicopters are probably occupied ferrying passengers and supplies, so I’d imagine few can be spared for reconnaissance; satellite imagery is the best way to go for a snapshot of the area, and Google contracted GeoEye to shoot some shots for just that purpose. Check out Google’s Haiti relief and imagery page here. It’s good to note every once in a while that the technology we take for granted can actually be used for things other than finding the nearest coffee shop. — CrunchGear

Journalism is dying but PR is booming. Great. The recession has increased corporate demand for PR, analysts say, and enhanced the industry’s status. “We used to be the tail on the dog,” says Richard Edelman, the boss of Edelman, the world’s biggest independent PR firm. But now, he continues, PR is “the organising principle” behind many business decisions. — The Economist

NY Times wants its very own Gossip Girl. New York Times Metro section editor Joe Sexton is “looking for a tiger,” according to a job posting passed along by a tipster… “Yes, we’re finally doing it: Creating a full-time beat covering New York’s private schools. It is, perhaps, the one topic other than real estate that lights up cocktail party conversation,” Sexton writes in his memo. — Gawker

When there is a wills there’s a way. “Tight security for Wills visit”, proclaims the Courier Mail today. Please note, multiple Wills are third in line to the throne.

Regarding Terry Towelling’s nitpicking of the Courier Mail… I don’t think there’s a problem.

HRH is often referred to as “Wills” (with an s), so in that context, it’s not dissimilar to “Australia yawns at Ponting century” or “Reader overreacts to Courier Mail headline”.

How do you figure that, Geoff – are you counting the incumbent as being in line?