It’s probably worth having a squiz at the size of the public opinion hurdle Tony Abbott faces on his two chosen policy areas -- water planning and the environment.

With Tony Abbott delivering the first set piece of his leadership last night at the Sydney Institute, the full gory details of which can be read over here, it’s probably worth having a squiz at the size of the public opinion hurdle he faces on his two chosen policy areas — water planning and the environment.

We’ll use Newspoll data for this, although it carries upsides and downsides. On the upside, the data on the environment goes back to 1989 and the data on water management goes back to the beginning of 2007.  The downside, however, is that there hasn’t been a poll on either issue since February 2009.

First up, Newspoll asks the question:

Which one of the (insert parties) do you think would best handle the issue of water planning? 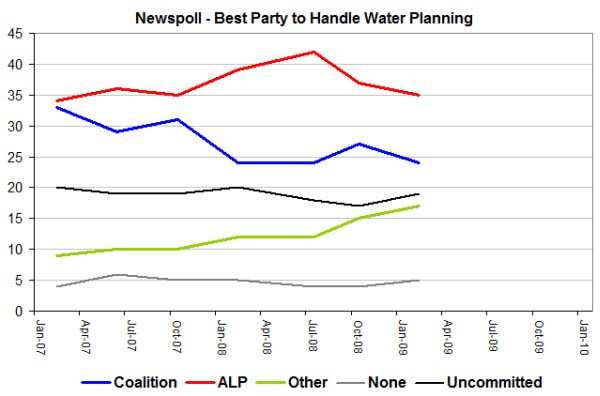 On the environment, the Newspoll data covers a much larger time span. We’ll do two charts for this — one similar to above, and another showing the lead Labor has held over the coalition on the issue:

One partially interesting result though is how Labor didn’t get a very large incumbency boost in their first year of government on the water planning issue — a boost that often happens on these issue management questions. That 5-7 point boost they received in their honeymoon had been washed out by last February.

Even though the coalition face a 10-point deficit here, that honeymoon effect having already washed out for Labor is probably the good news for Abbott. So saying — the last poll was a year ago. We should get another one shortly.