All the lazy best of the summer news

A salute to the best-of-the-worst articles being passed off as "newsworthy" by the Aussie media during this annual summer suckhole of no news, as submitted by Crikey readers.

At the start of the week, we asked Crikey readers to send in some of the best-of-the-worst articles they’ve spotted being passed off as “newsworthy” by the media during this annual summer suckhole of no news.

Here are some of the most egregious examples:

Gen Y @ 30: charmed, tech savvy and ready to take over

One contender for a podium finish in the worst of summer journalism must surely be Lorna Edwards’ front-page effort, ‘GenY @ 30’ in Saturday’s Age (January 9), which oozed stinkily on to page 4. Declaring that Gen-Y had arrived and was ready to take over the world now that they were turning 30, Edwards proceeded to introduce readers to six (count them — six!) dynamic young firebrands, who are the anointed spokespeople of their generation. And who are these over-achieving powerhouses? Philosophers? Environmental scientists? Civil engineers? Economists? Human rights lawyers? Well, no. Three worked in “hospitality”. One worked in “customer service”. One worked in a bank on “corporate sustainability”. One was a stay-at-home mother who was married to a travel agent and got to travel lots. Most of them hadn’t managed to move permanently out of their parents’ house. Taking over the world by waiting on one restaurant table at a time, apparently. It didn’t seem to occur to Ms Edwards that, if she was declaring Gen-Y had attained maturity and was poised to swoop on the spoils of the baby-boomer generation, she should interview people who actually do something of consequence. — Robin Garden

Maybe in Melbourne you were spared the uber tripe served up by the Tele in Sydney: Bingle? Bingle. Bingle. Bingle? Lara Bingle’s handlers/publicists have certainly earned their 40% this year. When Lara recovers from her emotional trauma perhaps she’ll give them a spin in her Aston Martin as a bonus thank you. The depressing thing is that, with time off over Xmas, in our household we indulge in buying all three news dailies over summer, rather than the one Oz or SMH.

And, as per usual each December, the Tele slims down and serves up bollocks journalism that insults the intelligence of its readership even more than usual, yet still I hand over my money in the newsagency each morning! I console myself with the fact that I’m sure the Tele doesn’t make anything from its cover price, and I gamely consider myself immune to the power of advertorials. With the Tele being nothing more than a celebrity-driven advertiser rag, my bet is that it’ll be a free hand-out (a la London Standard) within 12 months. — Denise Alexander

The grave state of news in Toowoomba

Here’s a great example of “journalism” — this is the front page of our local “rag”: 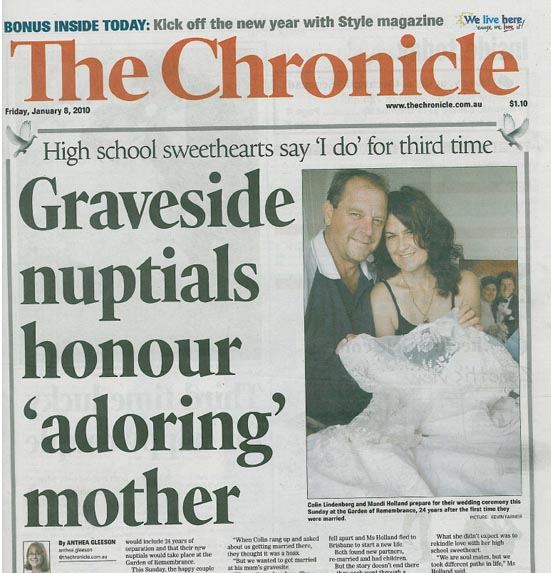 And so the first Wankley Award for the year goes to all the terrible pap padding out pages, screens and airwaves over summer — a salute to an annual Aussie tradition as well established as our yearly mockery of it.

Rejuvenating journalism in a jaded age: Ballad of a Thin Man

The seven most overused cliches in journalism

Bloody hell Ruth.
You start the year off by listing the nominees and then don’t even announce a winner!!!!
Utter craven cowardice from Crickey.

Harden up and make a choice for God’s sake.

I mean….It’s not really that hard.
FFS! How often do I find myself searching online for the graphic details of a Toowoomba Chronicle front page spread?

The winner by a country Queensland mile. 🙂

Christ!! Where’s Mick the subbie when you need him?
Crikey turned to Crickey when I wasn’t looking. 😛

They’re all winners. And we’re all losers.

My experience of the Silly Season so far was firing off a letter to the “”Sydney Morning Herald” about an article (originating in the ”Age”) which lifted nonsense verbatim from Wikipedia. I was promptly rung by the journalist – obviously a slow news day! – whose only apparent defence was that she’d used other sources, and of course it had been sub-edited.