Australians' working hours have (ever so slightly) declined, a look at the figures of Australian media coverage of boat people, some sloppy sub-editing at the Daily Tele and more.

Economic conditions not getting worse. The pundits again were surprised when the Australian Bureau of Statistics this morning brought out another set of numbers showing employment up and unemployment continuing to go down. The seasonally adjusted unemployment rate is now put at 5.5% for December with the economic pundits, who had not expected a fall, now predicting that the only way for the rate to go is down. 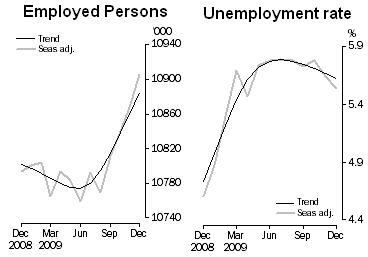 They may be right but not everything in this morning’s figures is as rosy as it first appears. Among the figures produced by the ABS is an estimate of the total number of hours worked by Australians during the month and it shows a very small decline rather than a rise. Much of the growth in employment is in part-time jobs and in the full-time ones it appears that the number of hours being worked is less than the historical norm. While there has clearly been a rise since last year’s low point, there is still a long way for the recovery to go before we get back to the levels of before the world financial crisis.

Traders love action. Money market traders love action. It is only when prices keep moving up and down that they can exercise their skills in fleecing the mugs that bring them their big end-of-year bonuses. So, no surprise then that the common reaction of the banking spruikers was that the employment figures increase the likelihood of the Reserve Bank forcing interest rates up again.

The Australian dollar jumped a third of a cent and bill futures slid as the market priced in a greater chance of a rate hike at the Reserve Bank of Australia’s (RBA) next policy meeting on February 2.

The gamblers on the betting exchanges have been a little more circumspect. Their activities now have the Crikey Interest Rate Indicator showing a 55% chance of rates in February going up by 0.25 percentage points with no change at 37%. Judging the rates important for the PM. The man for whom judging the future course of interest rates is extremely important is Kevin Rudd. What level they are at when he actually goes to the polls will have a major impact on how he performs. If inflation later this year really is the problem that the Reserve Bank seems to think it will be, Labor should stop worrying about the problem a future half-Senate election will be and concern itself with winning this one. The prudent leader would call a double dissolution as soon as the kids are back at school and forget all about the nonsense of putting his emissions trading legislation before the Parliament for a third time.

Hardly a record year. The coverage given by the Australian media to the arrival of boat people in our territorial waters might lead the unsuspecting to think that some kind of mass invasion is taking place. The figures show something quite different. 2009 in truth was a pretty small year for this kind of illegal immigration — admittedly bigger than in 2008 but the numbers were well down on what was happening a decade ago.

That table, compiled by the Parliamentary Library in Canberra with the figures for 2009 provided by the Department of Immigration, shows the peak year for unauthorised arrivals was 2001. Last year’s figure, which includes the 12 people who died at sea but excludes the two who arrived on Cape York in the industrial Esky, was less than half of the peak number.

A little self promotion? When you start writing about yourself in the third person, you really are showing the megalos. When a rugby league coach starts predicting in his own column that he is contemplating changing clubs before the season even begins, he must be downright bonkers and Cronulla’s Ricky Stuart is certainly not that. So methinks this piece on the Sydney Daily Telegraph website this morning is a rather sloppy piece of sub-editing.