Tips and rumours: New changes to the criminal justice world

So apparently there is a new charge sheet to be used for all people being charged by the Victorian Police. Too bad no one remembered to tell anyone about it.

Victoria’s criminal justice workers are coming back from their holidays into a very different world, with a new Evidence Act and Criminal Procedure Act now in force. And, of course, there are those who preferred to put their head in the sand rather than prepare for the change. The Australian Federal Police took a freshly arrested perp to the Melbourne Custody Centre and presented then with the new charge sheet.

“We can’t take him,” said Corrections, “that’s not a charge sheet.”

The AFP told them about the new legislation and the new forms.

“I don’t know where you got it. I’ve never seen a charge sheet like that before.”

So the AFP called a duty magistrate to clear up the confusion. The magistrate arrived at the Custody Centre, looked at the paperwork and said, “I’ve never seen a charge sheet like that before. Let me just call the Chief Magistrate.”

The Chief Magistrate answered the phone, heard a description of the form, and agreed that yes, that was the new charge sheet. The accused could be lawfully taken into custody. The corrections staff obliged, and the AFP headed over to the Magistrates’ Court to file the charges.

The listings clerk looked at the form and said, “I’m not putting this on the system. I’ve never seen a charge sheet like that before.”

And off they went again …

They’ve removed it now, but SMH was running a photo from Twitter that was purported to be of the Haiti earthquake. Screen grab below: 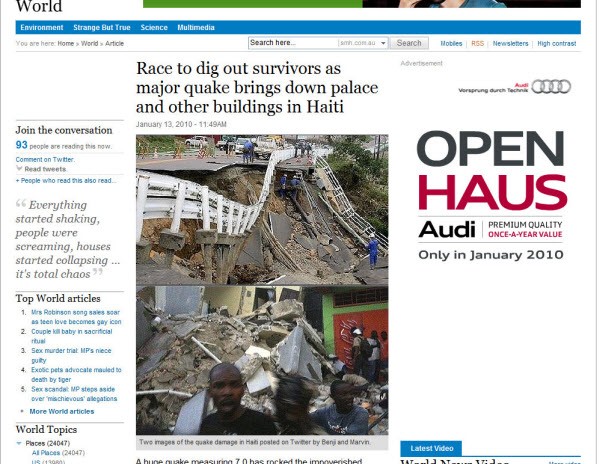 Thing is, it’s a National Geographic photo of an unrelated event.

Re. The World Game nonsense and after hearing about Crikey‘s plight, the admin of SCFU has had a cheeky poke at SBS’ coveting of the well-known phrase by changing the names of some of the forum titles on the site. i.e. Australian Football forum is now The World Game In Australia. The “World Football” forum is now simply The World Game and “Never Mind The Boll*cks” (a general non-football discussion forum) is now Not The World Game.

Apropos the ANZ Bank’s “excess cheque transaction fee” (“Tips and rumours“, yesterday).  As well as that fee, whenever I wrote a cheque, I was also charged a $2 monthly fee. So whether I wrote a cheque or not, I paid.

When I called the ANZ (which has all my money and all my accounts) to close the cheque account, they offered to continue to provide me with the cheque account with no fees.  So, it’s always worth a call to your friendly call centre. Who knows what deal is on offer?

As a follow up to today’s story re ANZ  “excessive cheque” gouging, I recently received a missive from them explaining that the $35 a month fee if your account is overdrawn at any stage of the month has been changed.

The new charge is now $6 per day for overdrawn accounts with a maximum of $60 per month. A vast increase for  those pensioners struggling every fortnight to try and balance a very tight budget.

Where English football supporters live in London: a map

A map created by Big Think shows the clear geographical slant of football fandom in the British capital: the centres of gravity for each ‘fanland’ tend to be around the home grounds of each team.

Who are the 22 men whose votes will decide where the 2022 World Cup is held? And how are they likely to vote? Neil Walker investigates.

What price for the English to pay for the 2018 World Cup?

The English bid for the 2018 FIFA World Cup is starting to feel grubbier and grubbier, writes The Guardian's Paul Hayward, and are horsetrading and acquiescence a price worth paying for an event England have not won since 1966?