Julia Gillard has taken the media spotlight as the PM takes a break. Apart from that, it's been all about the whales in the first Media Monitors' Top 20 list of 2010.

Julia Gillard is right up almost at the top of the list — as she usually is at this time of the year — dealing mainly with the continuing issue of violence against Indian students. It’s not quite like the times when the Acting Prime Minister performed their duties from a caravan somewhere on the coast. I have a sneaking suspicion she hasn’t even been watching the cricket.

Apart from that, it’s been all about the whales since the start of the year, Simon Crean stepping up from his usual extremely low profile, while Greg Hunt attacks Peter Garrett from the left and Tony Abbott attacks him from the right on the issue. It’s been a relatively effective double act so far, but then it is still the silly season.

Meanwhile Kristina Keneally has unsurprisingly taken no break at all and is being seen everywhere on everything in NSW. It hasn’t made a lick of difference in the polls, but at least she knows it’s a sprint not a marathon so there’s no need to pace herself.

The three Premiers facing election this year all make the list, one of them seen as a shoo-in, one far less a certainty than he was a few months ago and the third seemingly destined for either minority government or opposition. At least that’s what the media tells us. 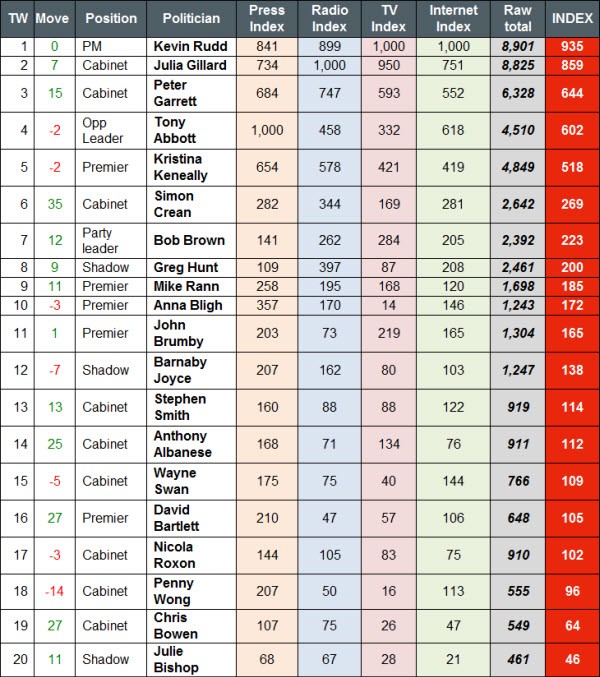 No surprises as to who’s on the list, a bit of a surprise at the level of political discussion so early in the year – it looks like 2010 will be a vintage year for talkback radio.

Ms Corby can still draw a media crowd, something she once keenly sought but which it seems has now worn thin.