Sarah Palin has confirmed her status as official wingnut by nabbing herself a job with the Fox News Channel. Plus, secret goss from an anonymous Facebook insider and all the rest of the geeky media world news.

Foxy Palin hits the screens. 2008 Republican vice-presidential nominee Sarah Palin is joining Fox News as a contributor, the news channel announced Monday. The former Alaska governor … has signed a multi-year deal to offer her political commentary and analysis across all Fox News platforms, including Fox Business Channel, FoxNews.com and Fox News Radio. She will also participate in special event political programming for Fox Broadcasting. “I am thrilled to be joining the great talent and management team at Fox News. It’s wonderful to be part of a place that so values fair and balanced news,” Palin said in a written release. — Fox News

Crunch time for Facebook. This year’s third annual Crunchies Awards have just concluded, and we’re happy to say that it was an overwhelming success … We’d like to take a moment to point out Facebook’s win for “Best Overall Start-up Or Product”, which marks the third year in a row that the company has taken home the top prize. Facebook continues to innovate and deploy features at an impressive rate while still showing incredible growth. Ours hats go off to you. — TechCrunch

An anonymous Facebook employee spills the dirt: they know EVERYTHING. Rumpus: You’ve previously mentioned a master password, which you no longer use.

Employee: I’m not sure when exactly it was deprecated, but we did have a master password at one point where you could type in any user’s user ID, and then the password. I’m not going to give you the exact password, but with upper and lower case, symbols, numbers, all of the above, it spelled out ‘Chuck Norris’, more or less. It was pretty fantastic. — The Rumpus

Zuckerberg regrets making his privacy settings. Facebook founder Mark Zuckerberg told a live audience yesterday that if he were to create Facebook again today, user information would by default be public, not private as it was for years until the company changed dramatically in December. — ReadWriteWeb

Google is … not letting rumours spread about Islam. Is Google trying to protect Islam? That’s the question asked by Fox & Friends this morning, but it’s something that has also been circulated around the web for a few days now — and it looks like all signs point to yes.

Here’s a Reddit thread started January 8 that gained a great deal of attention. It shows how when you enter “Christianity Is …” Google automatically shows you some possible search results, many which are not very favorable … This is true of all religions — all except Islam. — Mediate

Go Go magic advertising Jeep! As a promotional strategy, Channel Nine have deployed Jeeps to raise awareness of their Go! digital multichannel. It’s an OK idea in concept, but the execution of the idea has been terrible … A link on the Go! website takes users to their Facebook page, which provides details on the locations of all the Jeeps throughout the week. Unfortunately, all of these locations seem to be in far, out of the way places. The Jeep I visited today was nestled in the car park of a run down park nestled behind an industrial estate. Unless somebody was making a purposeful trip to visit the Jeep, there was no way that they’ll get any traffic passing by who may opt to interact with the Go! brand. — Televised Revolution

NBC fail live in the here and now. NBC touted its decision to shift late-night comic Jay Leno into a five-days-a-week primetime program as a manoeuvre made with the future in mind. Too bad the present got in the way. With audiences scooting to Twitter, Hulu, DVDs, programs on demand, and a library of shows recorded on DVRs — to name just a few of the dozens of emerging video options out there — it just made plain good sense, or so NBC Universal CEO Jeff Zucker theorised in various investor presentations, to cut back investment in flashy scripted dramas in favor of a program that cost less to make even if it drew fewer eyeballs … What happened? NBC made its Leno move thinking about the future of broadcast TV, but in the process appears to have neglected what’s required of the medium in the here and now for three core constituents: advertisers, audiences and affiliates. — AdAge

Oh good, a curry joke to ease the pain. Nice to see that the Sunday Telegraph doing its bit to calm tensions over attacks on Indians in Australia. This subtle piece of cartoon commentary is sure to help: 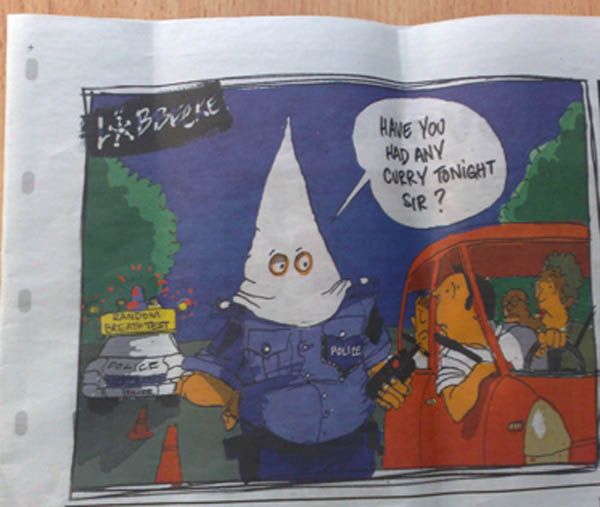 can we now refer to Palin as the Foxy Moron?