One thing’s for sure, Viscount Monckton of Benchley -- the “high priest” of climate scepticism soon to tour Australia -- does not lack self-belief. His significance on the world stage is enough for him occasionally to forget himself and rewrite his biography.

When he arrives on our shores later this month Viscount Monckton of Brenchley will be greeted as a saviour by local climate change deniers. He will be chaperoned by Ian Plimer, and Monckton’s sponsors, engineer John Smeed and his friend, retiree Case Smit, are hoping for big things. He’s already booked on Alan Jones’s show; I’m guessing Andrew Bolt is drafting an encomium to the English lord; and it’s a sure thing that The Australian will give over its opinion pages to him. 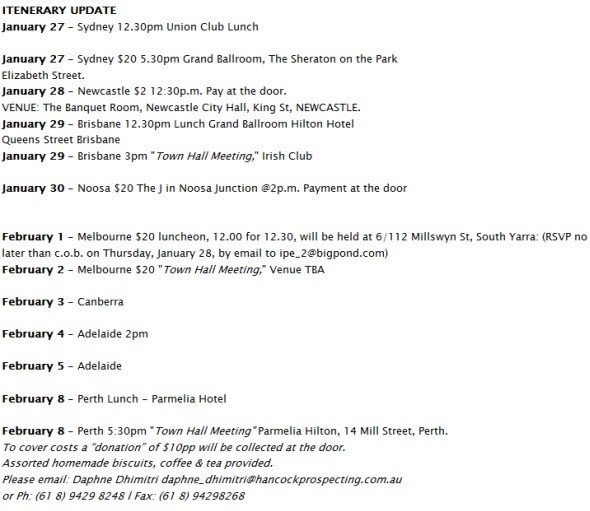 One thing’s for sure, Monckton — the “high priest” of climate scepticism soon to tour Australia — does not lack self-belief. His significance on the world stage is enough for him occasionally to forget himself and rewrite his biography.

He has claimed to be a member of the House of Lords (well, he once tried to become one), to be a Nobel Laureate (he wrote a letter to the IPCC which won a Nobel Prize, a connection close enough for him to commission his own gold Nobel prize pin), to have single-handedly won the Falklands War (he persuaded the British Army to use germ warfare on the Argies), and to have invented a cure for Graves’ disease, multiple sclerosis, influenza, food poisoning, and HIV.

In principle, over-egging one’s qualifications ought not to invalidate one’s arguments, but why are we not surprised that his statements about climate science have been debunked as amateurish, confused and full of school-boy howlers?

But the real fun starts with his politics. Here he is three months ago in a bravura performance before the Minnesota Free Market Institute:

“So at last the communists who piled out of the Berlin Wall and into the environmental movement and took over Greenpeace … now the apotheosis is at hand. They are about to impose a communist world government on the world.

You have a president who has very strong sympathies with that point of view. He will sign anything … in the next few weeks, unless you stop it, your president will sign your freedom, your democracy, your prosperity away forever.

So you see, Obama is in on it; after all, his Democrat party believes in “the tyrannical, anti-democratic system of command economy administration that we in Europe would call Communism, or Fascism, or International Socialism”.

It is tempting to scoff at the simple-minded mid-west Americans who lap up these fairy stories, until we remember that Senator Nick Minchin believes them too.

Monckton travels the world alerting anyone who will listen to the secret plan for a United Nations world government, referring to it as the “New World Order”, the term of choice of American wingnuts and televangelists like Pat Robertson whose 1991 book of that name uncovered a conspiracy by Wall St, the Federal Reserve and various others to create a world government serving the Antichrist.

The Viscount can see the extreme left lurking everywhere; not only at the heart of the environment movement, but in the corridors of EU head-quarters (“a tyranny ruled by the unelected Kommissars”) and the scientific establishment itself, characterising the venerable Royal Society as “a mere Left-leaning political pressure-group”.

It was perhaps at the Copenhagen conference last month that Lord Monckton’s eccentricity reached its zenith. He described the entire conference as “a sort of Nuremburg rally”, including “the Hitler Youth marching in and breaking up meetings”.

If you’re wondering how the Copenhagen conference could be a conspiracy to impose communist world government and at the same time be populated by Hitler Youth, Monckton reminds us that “of course the Hitler Youth was also left-wing and green”.

The Viscount even made a point of confronting the Hitler Youth, whom he found lurking at a conference stall masquerading as bright-eyed environmentalists. One of them took exception to being called Hitler Youth, explaining that he is Jewish and his grandparents escaped the Holocaust.

Still, in a spirit of healthy debate the young man offered Monckton his card so as to engage in a follow-up discussion. Monckton would have none of it, retorting: “I do not take the cards of the Hitler Youth.” (Watch it and weep on YouTube.)

There is much more one could say about Monckton — for him Zimbabwe will always be “Rhodesia”; and he has argued that blood tests should be compulsory for all, with those found to have the HIV virus locked away for life — but it feels cruel to go on.

During his visit here, it’s unlikely Monckton will receive an invitation from the “nasty fraudsters” at the Bureau of Meteorology, but those stumping up the $100,000 for his visit are expecting an invitation from the National Press Club. If they succeed, it will show that even the peak body of journalists can be suckered by the denialist strategy — worked out over a decade ago by PR operatives in the pay of Big Oil — to sow doubt by exploiting the media’s commitment to balance.

In Canberra, Monckton is already good mates with Steve Fielding, with whom he wrote a letter to IPCC chair Rajendra Pachauri pointing to the “fraudulent” nature of the Panel’s reports. The reception he receives from the Coalition will be an indication of the extent to which the outbreak of denialism under Tony Abbott has damaged its political judgment.

Lord Monckton concedes that he is used to looking like “an absolute prat”, which explains why in Britain moderate conservatives keep their distance. The Spectator’s Rod Liddle– himself sceptical about global warming — describes him as “a swivel-eyed maniac”.

Monckton and his associates are to climate scepticism what black-clad anarchists are to the anti-globalisation movement, except that the Moncktonians are no longer just embarrassing parasites on the body of sceptical thought but have colonised the host entirely.

Sceptics on the menu at Rinehart’s<br>luncheon

What I’ve seen of Plimer and Monckton I am genuinely surprised the denialists even bother listening to them. If they were on my side, I’d be trying to hide them at all cost.

There’s no irony in Monckton’s Perth gig being organised by someone from Hancock Prospecting, is there?

If this buffoon did not exist, I’m sure Monty Python would have invented him.

I so relish watching the rope play out slowly….oh..so…s-l-o-w-l–y.

These pathetic sods hang themselves!!

This guy reminds me of that doco by Errol Morris called Mr. Death: The Rise and Fall of Fred A. Leuchter, Jr.

It is a story of a little man getting a lot of attention for apparently proving (through a bogus experiment) that the Nazis used no gas at Auschwitz. He became a hero amongst dubious groups who all came to see him talk and cheer him on. He clearly enjoyed it.

I ask, who would have ever heard of Monckton if it weren’t for his stance on this issue?